When you consider the presenta­tions as a whole, perhaps the great­est revelation is that the promise of a fully integrated automation and plant knowledge management platform is now being realized. The days of data streams in silos, disparate plant control systems, and narrow one-off applica­tions is over. If your goal is to stream­line data systems, it appears possible now to standardize on one enterprise platform for the entire plant.

Next new thing is here

At the end of the article summarizing key points made at the 2011 Ovation Users Group meeting, “Ovation users glimpse the future, consider today’s solutions,” CCJ editors mentioned virtualization in the section “What’s emerging.” This year, in-plant experience was reported by one user with a virtualization pilot program at a coal-fired plant. The technology is applicable to many varieties of plant computers.

Virtualization in this context refers to using software to get more productiv­ity out of existing computer hardware. It allows you to run multiple operating systems on one physical machine by creating a “virtual machine” using soft­ware that replicates what the operat­ing system does in the hardware. While the technique, based on technology from VMware, has been prevalent in Windows-based workstations, Emer­son also has applied similar technology to Ovation controllers, valve-position modules, and Ethernet link controllers used for simulation.

The result: This coal-fired plant added several operator screens in the control room with a minimum invest­ment in added computer infrastructure (Fig 1). Another benefit is that it is much easier to recover from upsets using soft­ware rather than rebuilding worksta­tions. The plant is considering extending the virtualization to domain controllers, database servers, and historian, as well as adding virtual simulation.

One of the unintended victims of digital technology has been plant operators. The issues include data fog—too much information coming at them improp­erly organized—and poor human machine interfaces (HMI). Earlier this year, CCJ summarized a presentation by Harvey Ivey, manager of I&C sys­tems and field support for Southern Company, on HMI given at the EUCI-Pearl Street Inc conference, “Managing the Digitally Integrated Power Plant.” Ivey gave a similar presentation at the Ovation meeting.

A representative from one of the largest global powerplant owner/opera­tors offered his company’s experience on ergonomic design, incorporating control-room layout as well as opera­tor graphics. It should be noted that both Ivey and this user referenced “The High Performance HMI Handbook,” by Bill Hollifield, a consultant specialist with PAS Inc, Houston. In this case, pictures really are worth a thousand words, when you compare the control room layout designed by the plant per­sonnel (Fig 2) to that by the architects. 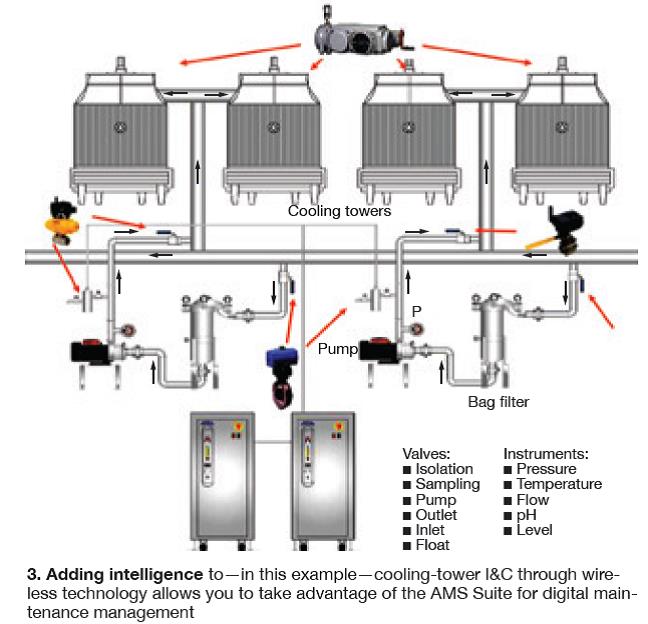 To design a control room, the own­er’s task force undertook an elaborate “adjacency” analysis to determine how the main elements of the control room should be positioned relative to each other; and a sight analysis, how things should be positioned relative to the operator’s eyes. The keys to their thinking on HMI were (1) to give information to the operator about the state of the equipment, not explain to them how a powerplant works, and (2) to develop their own standards and conventions for mimic displays, relative attention and value/priority ranking, navigation, and linkage to Ovation graphics.

One of the most unheralded advance­ments in automation is the progres­sive capability of wireless technol­ogy. Emerson’s Joe Cipriani and Scott Stofan made this point emphatically, declaring, “wireless applications aren’t niche, they are everywhere!” Although cybersecurity has been cited as a bar­rier to wireless, best-in-class solutions are available to keep wireless networks safe. The presenters noted that, for a typical boiler or HRSG 300 meters from a control room, wireless can reduce capital cost for instrumentation by 42%.

These devices are no longer for remote equipment too expensive to instrument in wired networks. As just one example, a customer purchased 117 wireless devices, 56 pressure and 61 temperature sensors, for a set of five turbine/generators at one power station. As a result, operator rounds have been sharply reduced, downtime reduced through better diagnostics, and startups are quicker because the plant can take advantage of fast-start logic enabled by the new measurements.

Not everything in automation involves the glitzy new digital smarts. Desuper­heaters are a problem area in many combined cycles. Improper desuper­heating causes tube stretching, tube metal failure, cold-reheat header crack­ing, water hammer, spray-nozzle fail­ure, and other ills, noted Josh Cromp­ton, of the Emerson Fisher Power Team. Although some plant personnel have not been informed of such, he recommends that spray nozzles in all desuperheaters be replaced every 18-30 months, and that insertion-style nozzles be inspected annually. Plus, strainers always should be used upstream of the spray-water control valves.

Severe-service valves for combined cycles include feedwater control, with the most common problem being leak­age. Entrained particulates often cause erosion conducive to leakage. For this application, the severe-service valves generally recommended have protected seats and large passages to allow partic­ulate through without inducing damage.

Adding intelligence this way allows you to open and close valves remotely; detect loss of power phase, torque switch trip condition, motor overload trip conditions, and loss of internal con­trol voltage; check on remote enabled commands; and monitor actuator position. At the valve, you can detect jammed or stalled conditions and con­ditions leading to increased force to operate. In addition, all the valves can be monitored and managed through the Emerson AMS Suite using a consis­tent dashboard to organize all the rel­evant valve information in one place.

Predictive control is the “next gen­eration,” according to Jeff Williams. Emerson’s version of model predic­tive control (MPC), a generic class of algorithms, is called Dynamic Matrix Control (DMC). Essentially, the control of the process is performed by comparing step changes in control response to a predicted response based on the model. There is a “control” horizon and a “prediction” horizon.

While there are still limitations as the models are refined, two plants reportedly are running optimization models successfully. For combined-cycle plants specifically, Williams, in another presentation, covered loading optimization across multiple units, compressor wash optimization, and unit response optimization for cycling and responding to the ancillary ser­vices markets (Figs 6, 7).

Part of the Ovation User Group expe­rience these days is to honor and formally recognize colleagues who have demonstrated and/or pioneered controls innovations and success­fully completed complex projects. Those recognized this year, only one a combined cycle, reflect the material discussed in the main article.

Southern Company’s Plant Ham­mond was selected from among entrants in the powerplant category for its Unit 4 DCS replacement. An Ovation system replaced a vintage Foxboro DCS for the boiler and selective catalytic reduction (SCR) units, and Woodward Governor con­trols and mechanical speed control for the boiler-feed-pump turbine drives. Goals of the project included NERC cybersecurity standards com­pliance, better graphical interfaces and remote monitoring of the DCS graphics and logic, updated simula­tor software and models, higher level of M&D on transmitters and valves, and better alarm management.

One project cited by Robert Yea­ger, president, Emerson Process Management Power & Water Solu­tions, for the strength of its nomina­tion, but ultimately not selected, was Constellation Energy (now Exelon) Westport Unit 5 control system upgrade. This was Emerson’s first retrofit of Ovation on a Pratt & Whit­ney Hi-Cap system, of which only a handful are in existence. The new controls allow balancing and load sharing among the eight engines (eight gas generators, four expand­ers) comprising this 132-MW facil­ity, and has improved starting and overall reliability from 50% to 100%, according to the applicants.

Project-of-the-year for the water industry was King’s County South Treatment Plant for its supervisory process control. A replacement of PLCs and Forney Corp controls with Ovation was done while the plant was on-line, with no disruption to operations.

For controlling the impacts of cycling, Emerson adds capability that more precisely controls steam tempera­tures, controls ramping consistent with limitations of the HP steam drum, and ramps at the highest rate allowed by the steam turbine, all in a coordinated fashion. Most combined-cycle control schemes do not optimize the start-up process, because of the low level of auto­mation provided in the original design.

When it comes to gas turbines and combined cycles, it is important to real­ize, or remember, that the monitoring system typically provided by the OEM is for protection only, to guard against a catastrophic failure. That is, they shut down the unit if any out-of-bounds conditions are detected. Reuben Wun­der, a subject matter expert for Emer­son’s Machinery Health Management business, discussed how Ovation users can go beyond the traditional protec­tion measurements, including turbine bearing accelerometers, turbine axial thrust, turbine case vibration, intake pressure, intake pressure, speed, and shaft position.

But Ovation can also “layer on” to the existing protection and supervi­sory systems. Wunder illustrated this using an Ovation retrofit at a pow­erplant that converted to combined cycle from a simple-cycle unit. This was said to be one of the first Mark VI controls retrofits. In this case, Emer­son integrated the GE EX2100 excita­tion system such that its functionality can be controlled through Ovation, and included the AMS Suite, and the CSI6500. In subsequent phases of the project, Ovation will provide direct control and monitoring of the HRSG, burner management system, feed­water and water treatment systems, substation equipment, and steam-turbine supervisory control.

In another example, during commissioning of an 8100-rpm, 1500-hp turbo-compressor, a high vibration level was detected in the expander, but because no mechanical issues were discovered, the vibration alarm levels were raised and the turbine oper­ated for a year. To determine the root cause, the plant brought in Emerson to overlay its prediction system onto the protection system. Immediately, noted Wunder, the system revealed a sub-synchronous vibration component and the sub-synchronous peaks were creating an unstable orbit.

The example above is only one illus­tration of how Emerson has positioned Ovation as a platform, the gateway to other plant knowledge systems, as well as a completely integrated automation and enterprise solution. The table shows how well connected Ovation is to third-party systems important to combined-cycle owner/operators.

Next up is the LM6000. Emerson has invested in a two-year develop­ment program around the automation of this engine and is in the commission­ing stages for its beta commercial proj­ect, four LM6000s for a facility in the Midwest. To overcome a key challenge with such retrofits, embodied by the question, “How am I supported when I go away from the OEM?” Emerson has developed alliances with PSM/ Alstom and Mitsubishi Power Systems Americas to provide a complementary suite of support services. 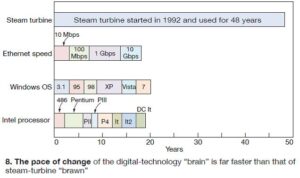 In a similar vein, Thor Honda, busi­ness development manager for steam turbine controls, discussed the many Emerson retrofits of steam turbine controls for ABB (ProControl, Advant, Turbotrol), Toshiba (TOSMAP-DS), Alstom (P320,P400), and GE (Mark V and VI), providing multiple examples in each category. Most of these legacy systems are no longer supported, not supported well, or were troublesome for plant owner/operators in the first place. Honda also addressed Emerson’s rotor stress solutions, which allows for shorter startup and loading sequences than typical OEMs’ loading curves. One of Honda’s eye-opening graphics reveals the difference in technology evolution of a steam turbine and auto­mation system elements (Fig 8).

It bears noting that the enhanced monitoring, diagnostics, and prognos­tics go hand in hand with the ability of independent service providers to sup­port a facility at equivalent or higher quality for less money than the OEM. Much of the domain expertise and diagnostic work that would have been performed by OEM technicians, often at exorbitant labor rates, or by the OEM’s remote monitoring facility, can now be done through advanced diagnostics. 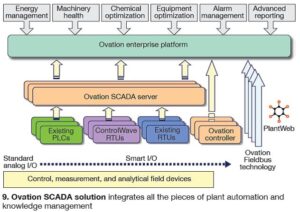 It often is said that the informa­tion about the hardware is becoming more valuable than the hardware. For many of the gas turbine and CC plants which came on-line in the late 1990s/early 2000s, the control systems are reaching the end of their lives, or are becoming obsolete and not well-supported by the OEM. This is not only an opportunity to replace a con­trol system, but to lock in aftermarket services around the hardware as well and provide a standardized platform for owner/operator organizations (Fig 9). In a big data driven world, he who controls the data wins. CCJ