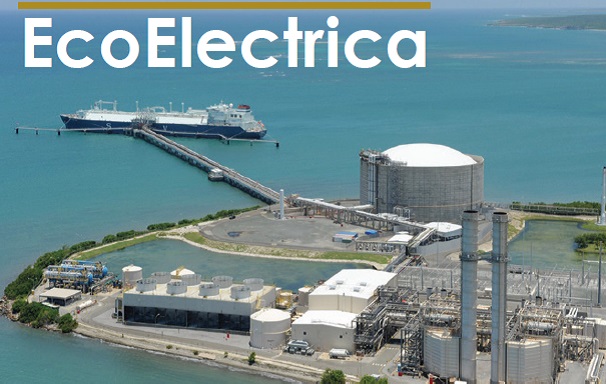 Challenge. Plant wide, there are over 100 valves that allow for the controlled flow of water or high-pressure steam when EcoElectrica is in operation. These valves are coupled to actuators that may be remotely controlled from the DCS. 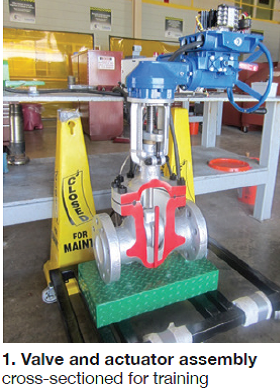 Solution. EcoElectrica worked along with an authorized distributor of Limitorque® valve operators to set up a valve-actuator assembly. The valve was cross-sectioned in a machine shop, coupled to the actuator, and the assembly was mounted on a skid (Fig 1). The assembly was then connected to a monitor showing a working simulation of the plant’s DCS.

Electricians, I/C technicians, operators, and mechanics completed the training that consisted of theory and hand-on sessions. Training participants were allowed to operate the assembly and observe the inner workings of the actuator and valve during various scenarios, including both proper and improper system operation.

This allowed for group discussions and questions clarification among the represented technical specialties, promoting teamwork in troubleshooting and problem solving. The in-house developed skid also has served to simulate actual malfunctions enabling a faster root-cause identification and fix.

Results. The immediate result following training completion has been increased collaboration among technical groups when troubleshooting valve-actuator issues. Technical personnel also are more confident because they better understand their jobs. The anticipated long-term results are as follows:

Challenge. Integrating an LNG terminal, a combined-cycle powerplant, and a thermal desalination facility at an environmentally sensitive site significantly increases the number of regulations and agencies with jurisdiction over facility operations compared to those required for a standalone combined cycle.

Emergency-response communication and reporting requirements at EcoElectrica are particularly complex, having to report to over 15 federal, state, and local government agencies and emergency first responders. The regulations underlying these requirements often overlap among agencies and facility processes.

Multiple emergency response manuals describing standard operating procedures at EcoElectrica were extensive and often confusing for the operations team during emergency- response scenarios. This situation had resulted in the following:

The challenge to the personnel at EcoElectrica was to distill all applicable reporting requirements in a concise, clear, and explicit manner to facilitate the expedited communication and reporting of emergency response incidents and counter measures.

Solution. Managers at EcoElectrica gathered all emergency-communication and reporting requirements concerning their respective areas of operation. The information was channeled through the environmental compliance manager who compiled and edited all applicable requirements into an explicit, clear, and concise document. Following revision by the plant manager, the document was sent to a printing shop to be produced as a professional-grade booklet.

The final product was visually appealing and durable, as it was printed on laminated white cardboard. The booklet, “Reporting Requirements: Emergency Regulatory Matrix,” was distributed to all plant personnel during training sessions aimed at discussing emergency-response requirements and answering questions among training participants.

Results. The results of this initiative were seen immediately. Increased awareness among plant personnel regarding emergency procedures and regulations has produced the following benefits:

Challenge. Ours is one of few powerplants in the world with an integrated liquefied natural gas (LNG) terminal. It is one of only 10 land-based terminals within US borders. The combined-cycle plant produces 16% of Puerto Rico’s electricity, which is sold to the Puerto Rico Electric Power Authority (Prepa).

Since COD in March 2000, LNG had been used solely to fuel EcoElectrica’s 507-MW combined cycle. The original LNG re-gasification system consists of two vaporizers and a closed-cycle heating system with a working fluid of 50/50 glycol/water.

The glycol solution circulates through the gas turbine inlet chillers, and through the heat exchangers and vaporizers to complete the thermal circuit. The original LNG regasification design (Fig 2, unshaded area) boosted the gas turbine’s thermal performance by lowering the combustion air temperature by approximately 15 deg F. 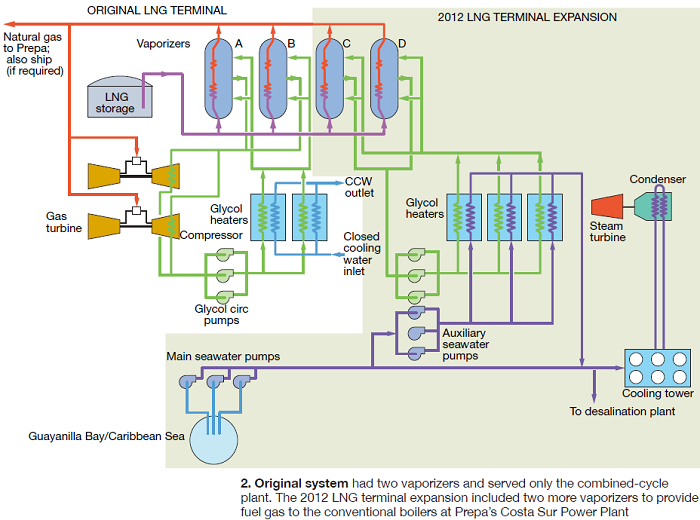 The design to increase regasification capacity was undertaken in 2010 to supply neighboring Prepa’s Costa Sur Power Plant with natural gas, given Prepa’s intent to modify its two nominal 410-MW conventional steam units at Costa Sur from burning oil No. 6 to dual fuel.

The challenge for EcoElectrica’s engineering team was to dispatch natural gas to Prepa in a safe and reliable manner, while maintaining or improving efficiency at the combined-cycle plant and the LNG terminal.

Solution. EcoElectrica’s technical team worked closely with project design engineers to provide insight into plant operations. Among several regasification technologies considered—including open rack seawater, submerged flame combustion, etc—the team and design engineers opted to use a side stream of the existing seawater intake to the cooling tower as a source of heat for vaporization.

The technical team was instrumental in providing feedback that led to the LNG terminal layout constructed in 2012 (Fig 2, shaded area). The LNG terminal expansion project required the following additional equipment:

The net effect of directing the seawater side-stream through the new glycol heaters is to reduce cooling-tower seawater intake temperatures for all plant services by approximately 10 deg F. Additionally, the implemented solution avoids fuel consumption and environmental impacts, and reduces auxiliary load consumption compared with the alternatives considered.

Results. The LNG terminal expansion improved combined-cycle thermal performance. The reduction of the seawater intake temperature to the cooling tower decreases the temperature of the cooling water for the steam-turbine condenser by 2 to 4 deg F. This increases the vacuum in thecondenser unit that results in a combined-cycle heat-rate improvement of approximately 35 Btu/kWh when 77 million standard ft³ of LNG is vaporized.

Since EcoElectrica is a base-load plant with approximately 80% capacity factor, over 90% service factor, and relatively high-priced fuel supply (spot market LNG), the annual fuel consumption savings have a material impact on the facility’s financial results.

Further, because Puerto Rico is a Commonwealth of the US, laws and regulations pertaining to EHS compliance at EcoElectrica are monitored by nearly a dozen federal, state, and local government agencies.

The new EHS inspection program would be integrated with the recently implemented systems adopted by the company to proactively manage occupational safety and health (OHSAS 18001) and environmental (ISO 14001) compliance.

Solution. The EHS team wanted to increase the number of EHS-trained inspectors and have the inspectors come from the various technical groups at the facility. This strategy has been shown to be a predictor of a safer worksite. The new facility-wide inspection program consisted in the creation and implementation of the following:

Technicians are certified after successful completion of courses administered by authorized contractors. The required courses are as follows:

Otherwise, the supervisor prepares a work order so that the action items are corrected either by facility personnel or by contractors. The completed inspection sheets then are submitted to the EHS departments who perform root-cause analyses and oversee any additional corrective and preventive measures to eliminate or reduce future risks or recurrences.

Results. The implementation of the facility-wide inspection program has resulted in an immediate and significant improvement in housekeeping practices at EcoElectrica. Feedback from government agencies and company stakeholders visiting the plant has been energetically positive.

Currently, EcoElectrica has 14 EHS-certified technicians from all technical groups to watch over the safety of all coworkers and the environment. The technical certification program has been very successful. Recently, all supervisors and upper management completed the program.

Thanks to the EHS inspection and other management programs, the most recent facility audits conducted by EcoElectrica’s insurance companies resulted in an “outstanding” rating, which corresponds to low risk. As a result, the insurance premium has been substantially reduced over the years. 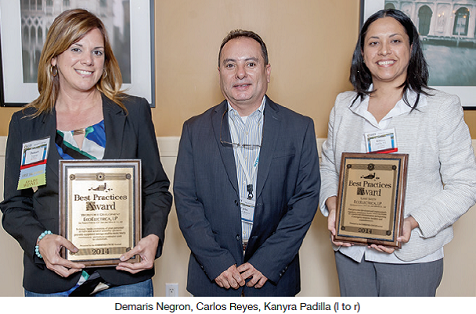 Operations technicians are locally hired, typically with a combination of technical education and petrochemical/pharmaceutical work experience. Operations shift teams consist of one supervisor and six operators, including one floating operator.

Prior to the implementation of a cross-training certification program, operators usually specialized in one of the five functional positions based on company needs, and employee’s technical competences and interest. There was no multi-skilled operator program in place. In case of absence, vacation, or sick leave, the position was covered by one of the floating operators with the required functional capability from any of the four operations teams.

This had resulted in the following:

Results. Program participation among operators has exceeded 90%. In 2013, nearly 60% of the operators had either completed three or more certified positions—or in the process of doing so. Having redundancy in the numbers of operators that are qualified for multiple technical positions has led to the following: