Challenge. A plant property risk analysis conducted in July 2012 included a recommendation to perform an internal inspection and cleaning of the onsite 500,000-gal combination raw-water/fire-water storage tank (Fig 1). The plant, which is situated in an area with no public utility interconnections except a sanitary discharge line that taps into a multi-community treatment facility, receives all of its water from two onsite well pumps that tap into the local aquifer.

These pumps supply all plant process systems and are also used to fill the 49.5 ft diam × 36 ft high storage tank. To meet fire protection requirements, half of the tank volume must be kept in reserve. If the tank level drops below 50%, the raw water pumps automatically stop so that plant staff can refill the storage tank; then the pumps are returned to supplying plant process systems.

It was also recommended that an inspection be performed of the closed raw-water tank to ensure that sediment, accumulated during 13 years of plant operations, had not reached a point where it infringed on the capacity of the fire-water reserve volume. The logic behind this request seemed sound, but because plant well-water conductivity averages around 300 micromhos, plant staff hadn’t considered sediment accumulation a risk.

Solution. To ensure the fire-water reserve, plant staff began planning an inspection of the storage tank during the 2013 annual maintenance outage. The team started by locating a regional vendor capable of performing the inspection in compliance with both plant and OSHA safety standards. Besides performing tank inspections, the selected vendor also routinely performs inspections of regional Army Corps of Engineers hydroelectric dams, which require a high level of safety.

Surprisingly, OSHA has very few regulations aimed at regulating the safe performance of diving operations, most of which are aimed towards the maritime industry. So, in coordination with NAES Environmental Support Services (ESS), the plant team identified safety concerns the job would create, emphasizing the need for detailed documentation. Participants began by conducting a job safety analysis (JSA), and then asked and answered the following questions:

Next, plant staff addressed concerns with removing water and sediment from the tank, as the plant is a zero-liquid-discharge facility. Reviewing the facility’s Integrated Spill Plan, plant personnel determined that the raw water did not constitute “process water” and, therefore, could drain back to the same grade it had originated from. The vendor constructed a filtering system to trap any solids, which allowed the water to drain freely (Fig 3).

Permit conditions require plant staff to report any “discharge to grade” to the local health department, which monitors and protects the regional aquifer. The plant maintains a very open relationship with its local inspector; an established level of trust and cooperation exists between the two entities.

Because the discharge from this operation did not constitute a “critical material” the plant was only obligated to perform notification by email, which included photos of the mesh containment. The department was satisfied that plant staff was continuing its stewardship of the regional water resource.

Plant staff provided vendor personnel with contractor safety training and after LOTO permit conditions were verified, plant staff issued safe work permits. Vendor staff staged a support trailer, initiated entry into the tank with plant staff overseeing the process, and then began performing a video inspection of the interior surface conditions of the tank and sediment that had accumulated on the floor.

All work was performed in accordance with the vendor’s Safe Practices Manual, The Association of Diving Contractors’ Consensus Standards, and all OSHA regulations. Divers were rotated in and out of the tank throughout the day to counter fatigue.

After the inspection was completed, vendor personnel broke down their equipment and plant personnel handled disposal of the collected solids. The vendor provided a written report of its findings, as well as a DVD copy of the video of the tank both before and after cleaning. Findings included:

Coating. In general, the coating was found to be in excellent condition; only few small areas of coating damage/rust were identified. White flakes were found lying on the bottom of the tank. Initially these were thought to be paint flakes, but when upon inspection appeared to be layers of calcium/mineral deposits.

Silt and sediment. Silt and sediment buildup on the floor was 0.25 in. deep or less. This material was vacuumed using a trash pump and transferred to a settling pond in an adjacent field about 100 ft from the tank. 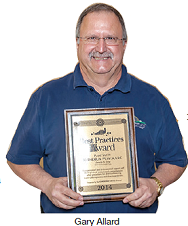 Results. Considering the length of time the plant has been in operation, everyone was pleased with the inspection and tank clean-out results. The process demonstrated a successful collaboration between plant and NAES ESS personnel, working an unusual situation into the protective boundaries established by NAES safety and environmental programs.

Challenge. Over the course of conducting many emergency preparedness drills, one item was continuously identified as needing improvement: The consolidation of emergency contact information in a single easily accessible format. This information was available in an electronic file index accessible from any plant workstation and in various binders kept on the control room console.

The concern was that during an actual emergency, plant personnel would be occupied with stabilizing plant systems and leafing through a binder would take time away from conducting a proper response to the emergency and from the stabilization of affected plant systems.

Solution. One improvement we had made in the past was the addition of a plant-siren activation switch to a DCS interface screen; it allowed operators to activate a GAI-Tronics alarm from the console during emergencies.

This was a great addition, but it required the control room operator to handle yet another task: Open the DCS index, open the siren activation screen, activate the alarm, and continue to make calls while keeping plant systems under control. The CRO then would then to go back and silence the alarm within a given amount of time or the siren would drown out radio and verbal communications throughout the plant.

It was determined that a simple solution would be to add all emergency contact information to a single DCS interface screen, along with the GAI-Tronics siren activation buttons, giving the CRO a single point of reference during an emergency situation. In addition to the screen, we installed a 60-sec timer to the sirens, stopping them automatically.

Results. Operators favor this new addition, feeling that they have fewer distractions to contend with during a crisis situation and the 60-sec timer ensures that clear communications is re-established after the initial notification of plant personnel of the emergency situation.