Jeff Bause, who heads up Groome’s HRSG Maintenance Division, well known for its cleaning and catalyst services to support reliable and efficient operation of heat-recovery steam generators, brought owner/operators attending the 501F Users Group meeting in Orlando, February 2018, up to date on industry challenges and trends.

At the top of Bause’s list were user goals of reducing pressure drop plus ammonia consumption, which were the focus of the case histories he presented. He also discussed current concerns regarding the sulfur content of natural gas and ammonia quality, catalyst end-of-life predictions, experience with combined SCR/CO catalysts, and the impacts of low-load operation on SCR performance. 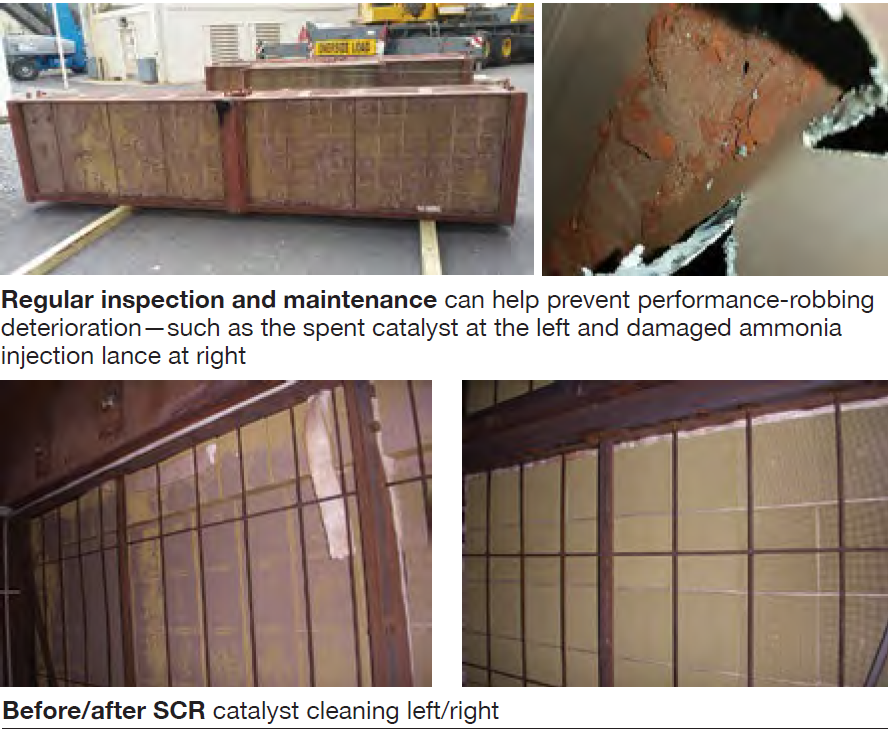 Results of the upgrades to both systems were excellent. At the first plant, NOx emissions were reduced from 3.86 ppm at the stack before conversion to 3.76 after—with a reduction in ammonia consumption from 488 to 380 lb/hr. Tuning reduced ammonia use by another 20 lb/hr. Pressure drop through the catalyst was decreased by 4.5 in. water—from 24 in. to 19.5.

At the second plant, stack NOx dropped from 5 to 3.5 ppm following conversion to a single-layer catalyst and ammonia slip decreased from 10 to 4 ppm. Ammonia consumption went from 72 to 52 gal/hr (including tuning). Pressure drop through the catalyst bed decreased by 2.9 in. water after the upgrade (from about 4.5 to 1.6 in.).

A third case history presented by Bause involved an LM6000 with a double-layer catalyst system using 19% aqueous ammonia. In this case, the pathway to better performance involved SCR catalyst cleaning, replacement of CO catalyst, and modifications to the ammonia injection grid. Last included new nozzles, mixing plates, and valve for the AIG, and tuning. Engineering for the AIG upgrade was provided by Environex, which also did the tuning.

Results: Required NOx conversion was achieved with less ammonia (22 gal/hr before the upgrade, 12.8 gal/hr after) and ammonia slip was returned to the compliance level.

Bause closed his presentation by saying his company’s services have been vetted and approved by catalyst manufacturers and OEMs alike. The Maintenance Division has serviced catalyst for more than 600 HRSGs and simple-cycle gas turbines. Contact Bause at jbause@groomeindustrial.com.