The experiences shared at the Australasian HRSG Users Group (AHUG) annual meeting have been chronicled for the last decade in CCJ. Beginning here, and going forward, you’ll also benefit from the lessons learned/best practices of fired-boiler owner/operators facing technical and operational issues closely related to those in HRSGs.

The first annual meeting of the Australasian Boiler & HRSG Users Group (ABHUG), chaired by Barry Dooley of Structural Integrity Associates Inc, attracted 75 participants from Australia, Japan, New Zealand, Thailand, UK, and US to the Brisbane Convention & Exhibition Centre, Oct 30-Nov 1, 2019. About half of the participants were users.

The agenda included 21 technical presentations and a welding workshop that brought together multiple experts to present on the latest standards, welding of service-exposed materials, ligament cracking in superheater headers, cold repair of Grade 91 material, etc.

The steering committee voted to expand the attendee base because many of the failure/damage mechanisms occurring in HRSGs are similar to those found in conventional boilers, and that other equipment in combined-cycle plants have many of the same issues as those in fossil stations. Dooley told the editors that ABHUG will continue to concentrate on HRSG aspects but will add the technical areas common to fossil and HRSG plants—such as tube failures, steam turbines, high-energy piping, valves, etc.

The chairman characterized the inaugural ABHUG meeting as a highly interactive forum for the presentation of new information and technology related to HRSGs and boilers, case studies of plant issues and solutions, and open discussions among users, equipment suppliers, and industry consultants.

ABHUG is supported by the International Association for the Properties of Water and Steam together with the local national committees of IAPWS in Australia and New Zealand. It is held in association with the European HRSG Forum (EHF) and the US-based HRSG Forum with Bob Anderson.

Tarong. The 1400-MW Tarong Power Station in Queensland was commissioned in the 1980s with four subcritical coal-fired boilers, each rated at 350 MW. The primary reheater is located in the back pass, composed of two sections with horizontal tube elements—126 total elements across each boiler’s width. Design steam conditions at the headers are 935F/765 psig (610 psig operating).

In 2012, owner/operator Stanwell Corp announced plans to shut down two units for two years because of reduced demand and low wholesale electricity prices. When the cost of natural gas rose in 2014, Stanwell returned the units to service. 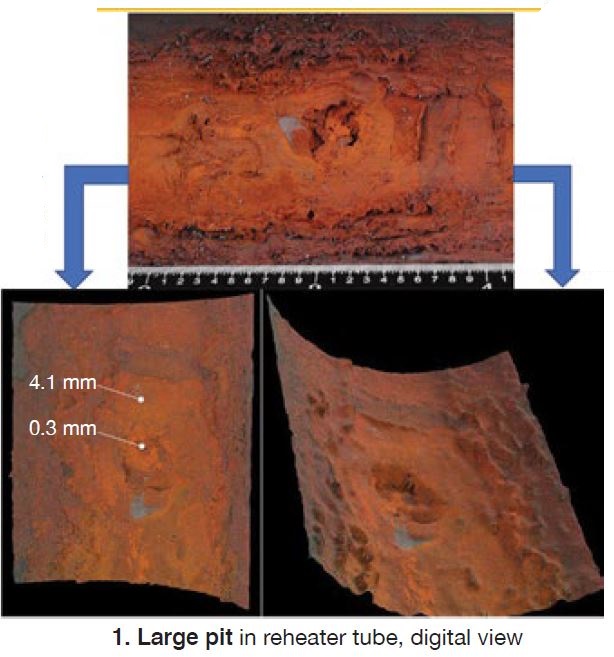 Stanwell adopted the process described in the EPRI document to determine the following:

Both visual and tube-removal analyses revealed the key factors and mechanism:

Stanwell’s G Wang stated the primary failure root cause as “condensate formed during shutdown. The accumulation of condensate at the bottom of the tubes with oxygen being subsequently introduced during the shutdown provides a stagnant oxygenated-water environment for pitting initiation and development.”

Kogan Creek Power Station, owned by CS Energy Australia, is a 750-MW supercritical coal-fired unit in Queensland, commissioned in 2007. In 2018, a tube leak occurred in the horizontal reheater section of the boiler, causing significant secondary damage and an 11-day forced outage. Fifteen tubes were replaced (Fig 3). The primary failure was a pinhole leak that developed near the middle of the horizontal run, at the bottom of the tube. The failure mechanism was identified as pitting corrosion. 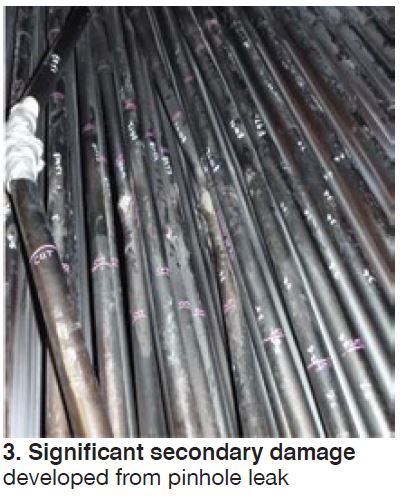 Galvanic corrosion caused by moisture and oxygen led to rapid pitting. CS Energy’s Luke Smith explained that “the base of the pit, low in oxygen compared to the wet metal surface, became anodic. This occurred during shutdown when steam was allowed to condense (not during operation). In this particular case, a low level of sulfate also was present.”

The long-term prevention objective is to replace dry steam with dry air (dry storage). Smith explained that “once the reheater has had about five changes of volume, the HP bypass is opened to allow air to flow to the superheaters. The flow of dry air will be maintained for the duration of the outage if possible. We aim for an RH below 30%.”

This was followed by participant discussion on use of dehumidified air (DHA) for systems including reheaters and steam turbines. Dooley again offered input: “Unfortunately,” he said, “the application of DHA is usually added after the damage has occurred, instead of proactively beforehand.”

Common tube-failure approach. Pitting issues from improper shutdown protection can affect both the HRSG and the steam turbine, as discussed in the recently released report “Trends in HRSG Reliability: A 10-Year Review,” by Dooley and Bob Anderson of Florida-based Competitive Power Resources (and chairman of the HRSG Forum with Bob Anderson). The Combined Cycle Journal’s summary of this valuable reference work appeared in CCJ No. 61, p 44.

In that report, the authors discuss the importance of root-cause analysis and HRSG tube-failure (HTF) programs. They caution that a tube failure often is assumed to be a bad weld, but warn that if tube removal and analysis are not performed the problems likely will continue.

This review continues: “In many cases the actual root cause may be due to a cycle chemistry deficiency, design feature, or operating practice that has repeatedly inflicted corrosion, corrosion fatigue, or thermal-mechanical fatigue damage in the failed tube and its neighbors.”

It is indeed complex. “The only way to ensure that the corrective actions are taken and will prevent a tube failure from recurring is to remove the initial failure site, have the actual failure mechanism identified via a metallurgical laboratory analysis, then determine the root cause of the failure.”

Stewart Mann, responsible for asset integrity at AGL Energy Ltd, discussed his company’s corporate-wide approach to mitigation of boiler-tube failures at both gas- and coal-fired units. The AGL tube-failure reduction program records each failure mechanism and root cause, the specifics of each repair, and all planned actions.

The approach-to-mitigation discussion raised many logical but often bypassed steps needed for a complete analysis program. First, the AGL program is based on the model in EPRI Report 1013098, “Integrated boiler tube failure reduction/cycle chemistry improvement program (2006).” Second, it is produced as a fleet-wide AGL standard. Third, it is now integrated with AGL’s cycle-chemistry standard.”

The goal is to apply risk-based systems to minimize repeat failures, reduce failures from new mechanisms, and decrease the number of failures at new locations for known mechanisms. As Mann stated, “Unless we have recently changed how we are operating, credible inspection and analysis should enable us to confirm whether a potential mechanism is an issue at our plants.”

Data gathering includes failure mode and mechanism, root cause, extent of damage to the tube with the primary failure, tubing in the vicinity of the primary failure (secondary damage), and the surface areas along the leaking tube.

“AGL is careful to preserve removed tubes for metallurgical examination, and to always consider possible removal of additional samples,” added Mann. Also, every repair has strict QA provisions for:

“All of this,” he continued, “requires good collaboration among trading, operations, and engineering.”

Each ALG site now has a dedicated boiler-tube failure-reduction program team that includes:

“All reports are finalized, distributed, and accessible to everyone,” he said.

International updates were provided on cycle chemistry, instrumentation, and flow-accelerated corrosion (FAC), plus a review of the recent IAPWS Technical Guidance Documents (TGD) in those areas—including the following:

Risks associated with welding of high-chromium materials are well understood in the industry, as are possible hazards during some chemical cleaning procedures.

Recently, however, hexavalent chromium has been identified on gas-turbine hot-gas-path components (Fig 4), steam-turbine hot external components (bolts), and on the external surfaces of hot HRSG/boiler piping. 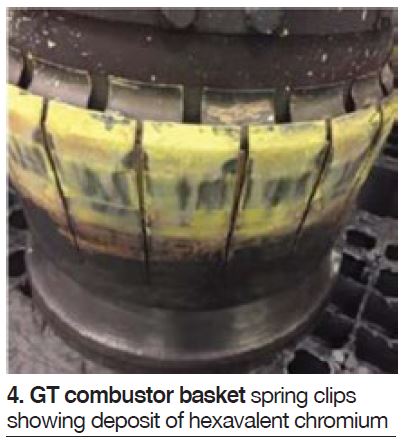 The yellowish appearance can be misinterpreted as sulfur deposits from the fuel. “Bright yellow HRSG gas-side deposits should be considered a major warning sign, and treated with significant caution,” noted Addison.

Although understood and manageable, this alert involved one particular slide labeled “unconfirmed risk areas” and offered the following details:

Upper and lower crawl spaces with:

A new inspection tool for developing a digital twin of pressure vessels and other plant components using state-of-the-art imaging and image-capture technology was described. Chairman Dooley said an interesting application of the technology might be its use in the upper ducts of an air-cooled condenser (ACC) to view, without entry into the upper ducts (streets), the tube entrances and any associated FAC. He should know: Dooley is a member of the ACC Users Group steering committee and respected for his knowledge of ACC damage mechanisms. Visit  www.acc-usersgroup.org.

A question/answer period included impromptu discussion of the oxidation limits for steels used in superheaters and reheaters. Dooley announced that a new index on oxide growth and exfoliation (OGE) is in preparation. It will discuss the formation of steam-side oxide, how the characteristics of oxide exfoliation vary from one material to another, and the various types of damage caused by different exfoliated oxides. OGE had piqued the interest of attendees at the 2019 meeting of the HRSG Forum with Bob Anderson as noted in the report for that event in the last issue (CCJ No. 62, p 42).

Experiences with pressure-wave cleaning of fireside/gas-side surfaces in fossil boilers/HRSGs were shared at the same forum perhaps for the first time. Pressure-wave cleaning of HRSGs was a “hot” topic at the 2019 meeting of the HRSG Forum with Bob Anderson as mentioned in the report for that event in the last issue (CCJ No. 62, p 42).

ABHUG returns to the Brisbane Convention & Exhibition Centre next year, in early December. Follow the organization’s website for announcements.

The sponsors and exhibitors active in ABHUG may be unfamiliar to readers in the Western Hemisphere. What follows are summaries of their activities:

Bang&Clean Technologies AG specializes in cleaning boilers and HRSGs by way of pressure waves created by closed and controlled gas explosions. The Swiss company’s patented system reportedly has been used in more than 20,000 cleanings since 2001.

Duff & Macintosh has specialized in the area of sample conditioning for the last 50 years. It is the exclusive agent in Australia Pacific for Sentry Equipment Corp.

Quest Integrity is active in the development and delivery of asset integrity and reliability management services.

Optimum Control Co represents a range of valve and actuator manufacturers and has a facility in Sydney to repair those components.