News of Charlie Zirkelback’s passing on July 8, 2016 reached us only recently. The Pascagoula (Miss) native, a graduate of Mississippi State University (1965, mechanical engineering), died at his home in Port Lavaca, Tex, after a long battle with Parkinson’s disease.

Charlie Zee was a “character.” He both taught and entertained at Frame 6 User Group meetings where Charlie may have been best known professionally outside Union Carbide/Dow Chemical. He worked at UC/DC for 39 years and was recognized by the chemical giant with the title of Corporate Fellow for his valuable contributions. Charlie was a “plant guy,” traveling to company facilities worldwide as a trouble-shooter and problem-solver. He experienced most everything having to do with power and process operations and maintenance in his career.

Charlie believed there was nothing he couldn’t fix or make work better. CZ put industry icon Marmaduke Surface blow to shame, Rube Goldberg as well, with his creative solutions. And once he got control of the mic at Frame 6 meetings it would be non-stop Charlie until the next scheduled break or meal. Loved and respected by colleagues, he was honored with the Frame 6 User Group’s 2006 John F D Peterson Award for his contributions to the industry and the user organization.

New to the guidebook this year is content pertaining to the use of MLGs, a topic which may have generated confusion among plant personnel in the past. The standard use of MLGs available from most manufacturers could result in a Code violation and safety hazard. Code compliance is assured by following guidelines presented in the Clark-Reliance publication.

The information presented is completely up-to-date and incorporates the 2015 Code changes and CSD-1 requirements, as well as recommendations from Section 7. Additionally, it identifies the most common non-compliant drum-level equipment arrangements and recommended solutions. The book is free to qualified recipients; visit www.boilerinspectionguide.com.

This is not news to industry veterans, but newcomers might benefit from a review of this best practice for gas-turbine protection during layup. A major international company in the oil and gas industry was dealing with materials wastage and other issues in a gas turbine located at a refinery near the seacoast and subjected to long-term layups.

The existing inlet damper was ineffective and a duct balloon was installed to stop the ingress of moisture-laden air and sea salts. A dehumidification system was added to increase the level of protection and together they are doing the job intended. Installation of the balloon takes only minutes and removal is quick and easy (photos). Dekomte (UK) Ltd subsidiary, Intech, handled system installation for US supplier G R Werth & Associates Inc.

With the introduction of what Emerson says is the industry’s first integrated control and simulation platform, the company has positioned plant owners to fundamentally change how they operate their facilities. Emerson reports that sales of Ovation™ high-fidelity embedded simulation have more than doubled in the past year, confirming significant interest in the “virtual powerplant” and its value in minimizing operational risk and in improving reliability.

In the virtual plant, the Ovation simulator runs in parallel with the Ovation control system. This allows operators to test control logic changes in advance, based on real-time plant data, ensuring those changes won’t disrupt operations. Other Emerson technologies—such as pattern recognition, Pervasive Sensing ™, and analytical tools—enhance the virtual experience.

The OEM reports that its global fleet of 146 advanced gas turbines had accumulated more than 4 million operating hours by the end of 1Q/2017.

Paul Browning, president/CEO of MHPS Americas, announced during Carnegie Mellon Energy Week that the university’s new index measuring carbon dioxide emissions from the nation’s powerplants reflects a cleaner environment, which is attributed to the replacement of old coal-fired units with efficient gas-fired capacity and renewables.

Grand River Dam Authority completes the first fire of its M501J-powered Grand River Energy Center, east of Chouteau, Okla, March 14. The engine is the first such machine to operate in the Western Hemisphere. The 495-MW 1 × 1 combined cycle is said to have the potential to become the most efficient plant of its type in the US when fully operational.

The M501JAC, an enhanced air-cooled gas turbine, is designed to produce 540 MW at 63% efficiency. As of mid-December 2016, the machine had demonstrated 99.5% reliability during 11,000 hours of commercial operation.

With an order for two M501J machines from Iberdrola SA’s El Carmen combined-cycle plant in Nuevo Leon, Mexico, MHPS now has 47 J engines on order and 23 such units operating globally. The fleet had accumulated 335,000 hours of commercial service at 99.3% reliability through 2016.

MHPS expands its global relationship with OSIsoft to drive further development of the digital powerplant. The latter’s PI will serve as the core for new interactive, cloud-based analytics services provided by the OEM. As part of this strategic alliance, the two companies will collaborate to define and promote new integrated digital solutions that add intelligence to powerplants worldwide, using best-in-class software while leveraging their respective knowledge.

Advanced Turbine Support LLC’s Director of Field Services, Mike Hoogsteden, (the handsome guy in the center of the photo) is all smiles participating in a Ride 2 Recovery event to raise money for wounded (visible or hidden) veterans. 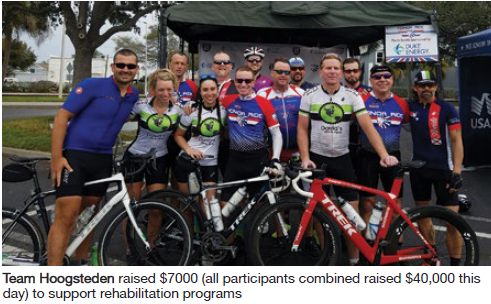 BASF Corp announces the availability of Camet™ ST, a sulfur-tolerant oxidation catalyst designed to prevent the deactivation of catalyst systems installed on units burning gas with fracked and biogas components.

Clarcor Inc’s announced acquisition by Parker Hannifin Corp was completed at the end of February. The strategic transaction creates a combined organization with a comprehensive portfolio of filtration products and technologies.

NV Energy and Apple have agreed to build 200 MW of additional solar power generation capability in Nevada to support the latter’s Reno data center. This is in addition to the 491 MW of universal solar resources in the state currently serving the utility’s customers.

Heart of the Liqui-Flux module is the company’s UltraPES™ polyethersulfone membrane which is said to reduce the potential for fouling. High caustic resistance and free-chlorine tolerance are two attributes of the modules, which can operate at pH values between 1 and 13.