Editor’s note: This article introduces a novel combustion-dynamics monitoring (CDM) algorithm and a case study to demonstrate its successful detection of a gas-turbine combustor fault which otherwise might have done extensive damage to both the combustor and hot-section components. Failures of this type often develop from small, insipient faults which produce subtle signatures in the dynamics data.

Fault signatures can be detected by advanced monitoring algorithms to identify them before parts fail and force the unit out of service. The CDM algorithm described here blends data analytics and combustion domain expertise with existing combustion monitoring data. It currently is fielded on a fleet of frame units and has successfully caught several faults at sufficiently early stages to plan repairs without a forced outage.

Some of the most-costly forced outages are those that stem from failures in the gas-turbine hot section. These failures are particularly catastrophic when they compromise the turbomachinery. While the power turbine is subject to its own failure mechanisms, it is also vulnerable to debris from combustion-system failures.

Typical lean premixed frame-engine combustion systems have several parts that tend to degrade and fail—including the transition piece, combustor liner, TBC coatings, cross-fire/cross-flame tubes, and fuel injection/premix hardware. The last includes dual-fuel nozzles, center bodies, swirlers, and numerous other components depending on the engine make and model. All of these parts have limited lifetimes because of the harsh operating environment, and unwanted phenomena such as flashback, autoignition, and combustion dynamics.

Failures produce fault symptoms—such as issues with operability and emissions, tuning challenges, elevated temperature spreads, and “drifting” combustion dynamics in one or more combustors. When these symptoms are not recognized, the part eventually fails catastrophically and the unit trips because of the loss of one or more combustors, or of the power turbine. Combustion dynamics often provide the earliest symptoms of such issues.

Permanent CDM systems on can-annular frame engines typically include a sensor for every combustor can to measure acoustic pressure. The OEM or third-party monitoring software reads the time-dependent pressure signals and periodically implements a fast Fourier transform (FFT) to convert them into frequency-dependent spectra. These spectra are partitioned into several bands, or bins, within which the software monitors for the peak pressure amplitude and its corresponding frequency. The “bin data” are stored in the historian.

Combustion-dynamics bin data are used for tuning by both manual tuners and automated tuning systems. In addition, the data provide these two opportunities:

Combustion dynamics are very sensitive to faults such as (1) cracks that change flow paths, and (2) premixer damage that affects flame shape. Thus, CD can be monitored for small changes (amplitude increases or decreases) or frequency drifts that might indicate the early stages of a component failure. Some operators use trending or advanced pattern recognition software to monitor for these symptoms.

The EPRI and Turbine Logic team has developed and patented a CDM algorithm that detects these symptoms and runs continuously and autonomously without any model-building or retraining: The algorithm continuously trains and retrains itself. In addition, the algorithm can distinguish among instrumentation faults, hardware faults, and tuning issues.

The health algorithm consists of a data conditioning step, a non-uniformity check, and an anomaly check (Fig 1). The first identifies and handles instrumentation faults and other issues with the data stream. The non-uniformity step finds the combustion-dynamics signature of the unit during recent times that matched the current operating conditions. Finally, the anomaly logic analyzes the past and present CD signatures of each combustor to identify anomalous behaviors. 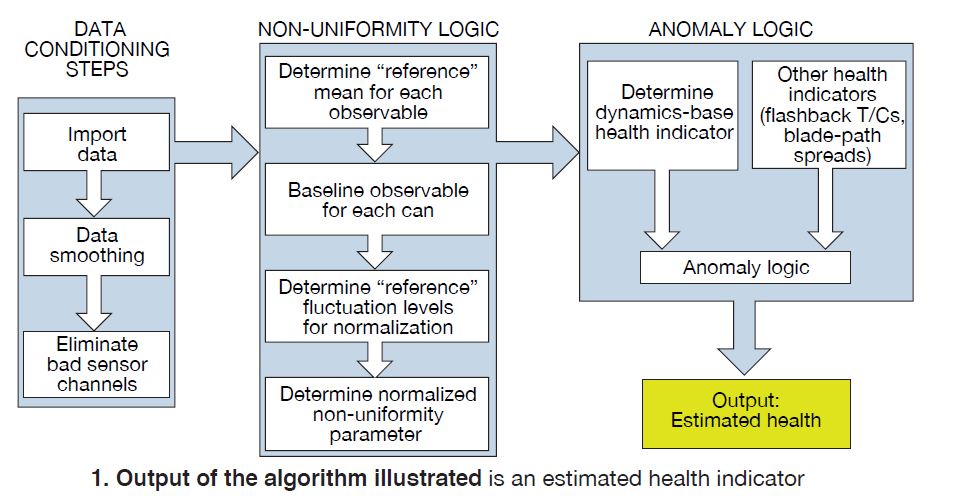 Dynamics signatures come from the bin data (peak amplitudes and their frequencies). Anomalous behaviors are defined as a deviation of one combustor’s dynamics signatures compared to its peers and its past. The peers are the other combustors on the engine. An anomalous behavior may include situations where a combustor becomes louder, becomes quieter, or exhibits a frequency drift compared to the other combustors and compared to its past behavior. Note that a quieter combustor does not necessarily indicate a healthier system!

The output of the algorithm is an estimated health indicator, which is a statistical representation of the severity of the outlier. When a combustor has outlier dynamics behaviors relative to its past and its peers, this can be explained by either an instrumentation fault or a hardware fault. The former may include condensation in standoff tubes, cable connector wear, or probe failure.

Hardware faults include any alteration to the combustor hardware—including cracks, leaks, and melting. For a given unit, dynamics signatures often can be paired with a particular probable hardware fault based on experience collected across the fleet. This experience is collected into a fault matrix, which is currently available for 7FA and 501F units. 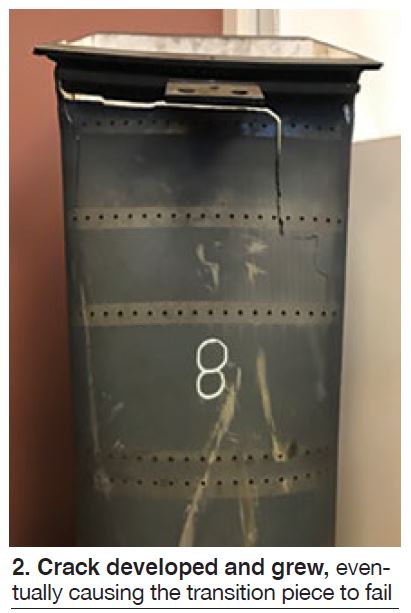 The monitoring algorithm described is designed for any can-annular gas turbine with a CDM system. However, the monitoring teams at EPRI and Turbine Logic historically have applied it most often to 501F and 7FA units and have gained experience with the combustion-system faults that the algorithm most commonly catches in these units.

Some of these catches have been predictive during live monitoring, while others have been “postdictive” catches in historical data to develop and demonstrate the algorithm, as well as to identify the time where the fault began to noticeably manifest itself. The most common catches for 501F units have been cracks in transition pieces and combustor liners; in 7FAs, fuel injection/premixing hardware damage.

An ENMAX Energy plant had experienced a significant force outage attributed to a gas-turbine component failure. What happened was that a crack developed in a combustor transition piece that grew until the component failed completely. In 2017, EPRI began providing monitoring services to the plant in an attempt to prevent future combustion-dynamics-related gas-turbine failures.

During the first year of the program, the algorithm detected abnormalities in the combustion dynamics data from one of a 501F engine’s combustors (Fig 3). The team reviewed the data in collaboration with the plant to rule out the possibility of an instrumentation fault, and subsequently concluded, with a high degree of certainty, that the combustion-system hardware had suffered damage. 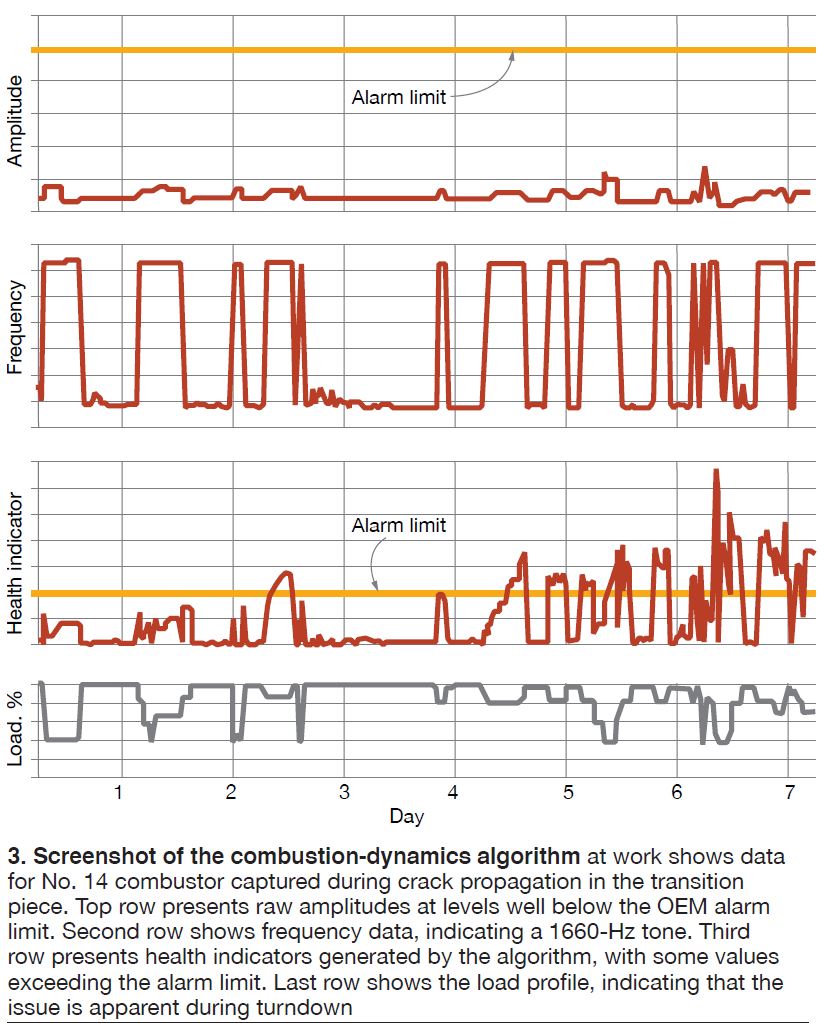 Because the CDM algorithm is sensitive to hardware faults at very early failure stages, the plant had time to manage the issue. A borescope inspection during the next planned outage confirmed the suspected combustor damage, validating the algorithm (Fig 4). 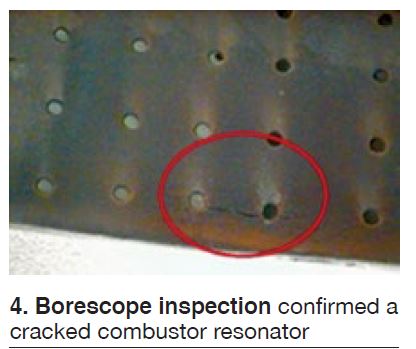 Plant personnel approached the OEM with the borescope images and were assured that the machine could continue to operate until a scheduled outage. Rather than discover this issue in a forced outage from part failure, the monitoring algorithm enabled the plant to catch the issue early and operate the asset confidently without impacting the dispatch schedule.

Summing up, CDM offers more than just damage prevention by monitoring and limiting combustion-dynamics levels. It is a valuable health diagnostic tool. Combustion-system faults commonly manifest in the combustion-dynamics data, even at early stages of the fault. Advanced monitoring algorithms can detect these abnormalities, distinguish them from instrumentation faults or basic tuning issues, and alert the plant of an impending problem. Successful implementation of these algorithms prevents forced outages and buys time to plan and schedule inspection and repair. CCJ