Within the last year, there have been several serious crane accidents in powerplants. The most infamous, perhaps, happened at Arkansas Nuclear One in April 2013, where one worker died and eight were injured. So, what do plant operators need to know about cranes to prevent such events?

First, hire a reputable crane company. It might cost more, but it is worth it. And be prepared, because that operator is going to ask for a lot of information.

Second, understand that the crane company will prepare a carefully thought out lift plan, one designed to assure a safe lift. If any significant change is made to the plan, the entire lift plan needs to be reconsidered. Last minute changes can lead to disaster (Fig 1). 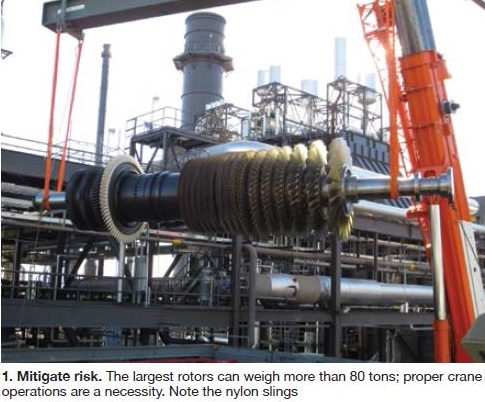 Work on the lift plan begins long before the crane shows up at the plant. “The very first thing I want to know is what I will be setting the crane on. I need to know what the allowable ground bearing pressures are,” says Project Manager Billy King Sr, TNT Crane & Rigging, Longview, Tex.

Concrete flooring is not necessarily a safe foundation for heavy lifts (large rotors can weigh more than 80 tons). King often requires that core samples be taken through the concrete and into the substrate. But to begin, King asks for the underground engineering drawings for the site. “You have to figure out where you are going to place the crane. If there are no underground obstacles, then you’re safe to do a core sample through the concrete. If there are underground obstacles, then there should be an engineering report that tells you what the allowable ground bearing pressure is.”

Old plants can be problematic, because engineering drawings can be hard to find and plant modifications might be long forgotten. “On one particular job, the operator wanted me to put the crane in this one spot. The plant was so old that they couldn’t find the right civil drawings, so we took all the drawings we could find and pieced them together. It seemed okay to do the core sample, but when we did, we drilled into a 20-ft-deep abandoned underground vault that no one knew about. If we hadn’t found it before the lift, we would’ve found it during the lift, when the floor collapsed,” cautions King.

TNT Crane has required testing for all heavy lifts for more than 15 years. King explains, “We were on a job in West Texas and no core samples had been taken. We were in the middle of the desert and picked up a rotor with the crawler crane. As we were backing up, the mats fell through and the crane tipped. When the plant was built, nobody backfilled around the foundation; it was just sand. After that, we started doing core samples for every lift. Everything worked out, but that could’ve been a $25-million mess-up and we could have hurt somebody.”

Once taken, cores samples are sent to a professional engineer (PE) for analysis. Core samples take about a week to collect and analyze and cost $5000 to $6000, a relatively small amount compared to the cost of the rotor and the crane. If the results show that substrate cannot bear the required load, mats and steel plates can be used (Fig 2). 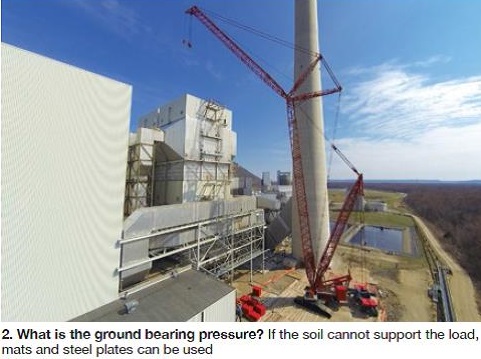 Maintain records. This does not mean a core sample is need for each lift, just for each location in a plant. Over the years, some rotors may be pulled more than once, but only one core sample is needed, unless underground work is done in the area. So, plant operators should keep careful records of test results and have the engineering drawings (underground) for the plant available.

The next thing a crane operator will do is review the rotor drawings, then locate the lift lugs (or trunnions) and determine where the center gravity is. The drawings are usually available, but if the plant cannot find a copy, the crane company might have the correct drawings on file. As a last resort, contact the manufacturer.

The crane company will then determine what type of rigging to use. While steel cables are still common, many companies now use ‘endless’ nylon slings (nylon rope covered by a Kevlar canvass). Lighter in weight, these are much easier to use and can handle the massive loads typically found in powerplants.

The rigging is the crane company’s responsibility, but the plant operator should ask when the rigging was last inspected (usually on an annual basis).

“The sun and weather are the worst things for nylon slings, and you don’t want them to get wet. That is one of our main safety mantras, King said: Keep the rigging put up and out of the weather when you’re not using it.” Another no-no is letting any rigging lay in the dirt. “Dirt is the worst thing there is for the steel cables, because it will work its way through the strands down to the core. It acts like sandpaper and eventually it will cut that center core,” he warns.

Spreader bars are also part of the rigging. They are used when a long load must be picked straight up at two or more points. For example, consider a rotor that is 30 ft long. To avoid using two cranes, a 30-ft spreader bar can be used. The bar is tied to each end of the rotor and the crane lifts the spreader bar from the middle. Spreader bars keep the lifting force (on each end) vertical. If two long slings were hooked from each end of the load to the crane hook, lifting forces would be at an angle. These angular forces can “squeeze” the top of the load—potentially damaging whatever is being lifted.

Available documentation should explain exactly how to set the rigging. In the case of a rotor, it should be in the rotor manual provided by the manufacturer. If not, an engineer can design the lift.

King’s next move is to use a tape measure to double check everything. He then draws the aerial view of the job site, determines where the center pin needs to be, and how to swing the load. Based on this information, King chooses what crane to use (Fig 3). 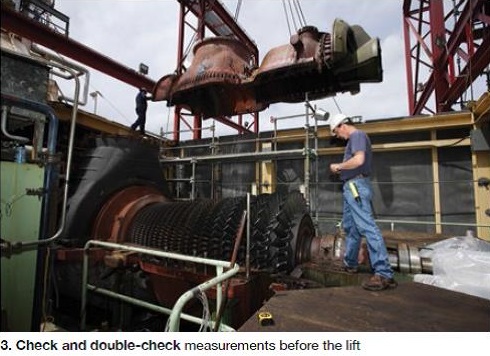 Stand clear! During the lift, only trained workers should be in the work area. A lot of rotor lifts are in the blind: The operator can’t see what’s going on and relies on other workers to provide instructions (boom up, boom down, swing). So, standing in the wrong place is dangerous and also distracting to the operators (Fig 4). 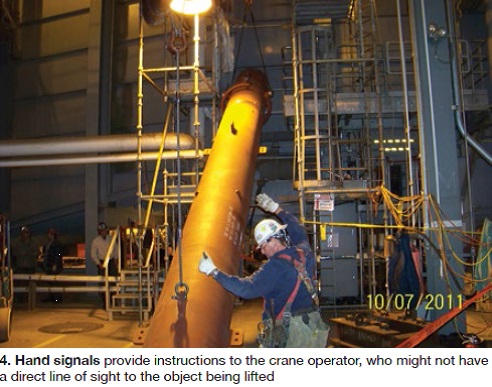 King points out that the crane crew receives a significant amount of training to be able to work safely. “We do in-house training, rigger training, operator training, supervisor training, etc. While a lot of that is bookwork, it never replaces field experience.”

And experience is critical. When a lift begins, the crane hook is directly over the center of gravity of the load. In a perfect world, the load would rise straight up, but the world is not perfect. As the crane takes on more and more weight, the boom flexes and the hook moves away from the crane slightly. When the load comes off of the ground, it swings away from the crane, trying to put the center of gravity directly under the hook.

The area between the crane and load is called the “front-side” and the area on the far side of the load is called the “back-side.” No one should ever stand on the back side of a load during lifting. From experience, crane operators know this; plant employees often do not. (In Texas, the back-side of the load is sometimes referred to as the “Oklahoma-side”—in other words, the place you never want to be. Perhaps in Oklahoma, crane operators refer to it as the “Texas side.”)

Taglines. During the lift, OSHA requires the use of taglines to help guide the load. “During a rotor lift, there should be a tagline on each end, to keep the load under control. If the rigging isn’t exactly right, the load can turn and swing into the boom. This can cause the boom to fail, destroying the crane and dropping the load,” says King (Fig 5). 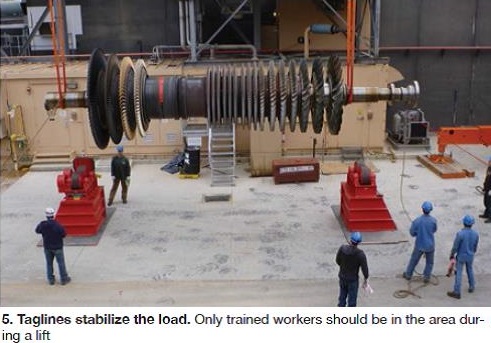 There are additional concerns, once the load is in its new location. In the case of rotors that usually will be the rotor stand supplied by the rotor manufacturer. If the rotor has to be shipped out, it will be lowered into a transportation (shipping) frame, usually on a 13- or 14-axle truck trailer (Fig 6).

“I’ve seen many situations where the planning could have been better. We’ve set rotors on 14-axle trailers only to find out that whoever planned the shipping routes didn’t get it right. The rotor and trailer won’t fit through the tunnels, under the bridges, or it is just too heavy. Then the plant has to bring in a hydraulic platform trailer and we have to move the rotor to that trailer.” 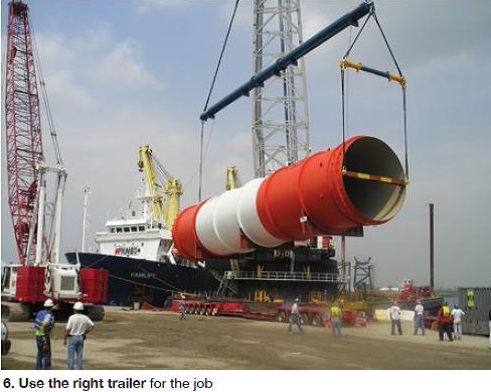 From experience, King warns that this is when things can go wrong. “When something changes, instead of making a rash decision, start over. Go back, rethink, re-measure, go through every step and create a new lift plan. The rotor is on the wrong trailer in the parking lot. There is no soils report, so you don’t know what you’re sitting on. Do not think that you can just swing the load over to the new trailer. If you do. . .bam. . .you could well turn the crane over and now the rotor is lying on the ground.”