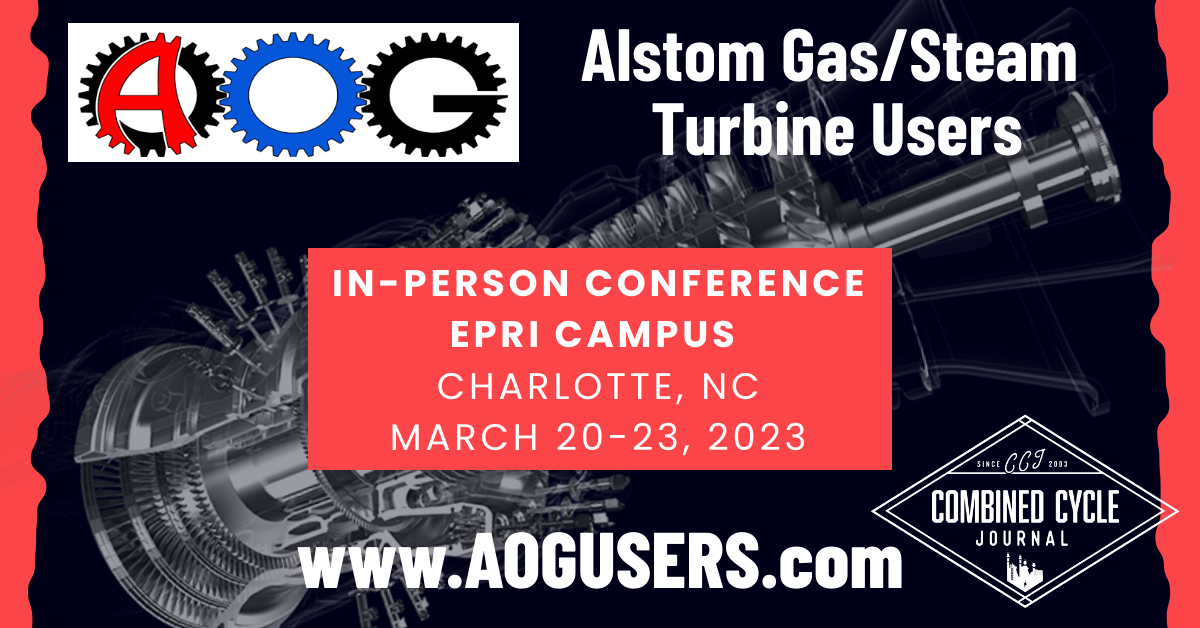 If you were unable to sit in on the second day of the 2022 AOG conference and want to hear what the OEM of record (GE) had to say, access the three-hour recording via the links provided in the last paragraph of this section. It is highly recommended to review the following in anticipation of the upcoming 2023 AOG in-person event in Charlotte, NC, March 20-23.

Given that three hours is a big bite out of anyone’s day, the editors recommend fast forwarding through the first hour and selecting the parts you want to hear using the summary below as a guide. Our guess is that you can listen to everything pertinent to your responsibilities over a typical desk-top lunch.

What’s in the first hour? The challenges of the post-Covid world regarding supply-chain issues, stretched-out delivery times for capital parts, the need for better advanced planning, GE’s planned reorganization into three companies, lessons learned, contingency plans, safety initiatives, cross training of personnel to alleviate some training challenges, and on, and on.

Some significant indications have been found during recent inspections of KA24 steamers. Of the dozen-and-a-half rotors inspected in the time period addressed, half had indications. TIL-2052 was updated to reflect these findings—one a particularly deep crack caused by creep-fatigue interaction. Interestingly, no abnormal vibration behavior was observed by plant personnel when the turbine was operating.

Root cause analysis (RCA) concluded cracking risk depends on the following, among other causes:

This TIL requires rework in the P1, P2, and P3 piston areas at 800 starts, plus operational changes to reduce life consumption.

TILs also have been released recently for units with configurations similar to those of the KA24: 2205 and 2230, equivalent-cycles based, and 2315 and 2316, equivalent-hours based (EOH). These have different equivalent limits and specific inspection and rework requirements based on the lifetimes of limiting features. Attendees were asked to work with their respective GE service reps to assess the current level of equivalent cycles or operating hours, whichever applies. Get the details in Slide 35.

TIL recommends regular borescope inspections to determine if a problem exists. Particularly important is to borescope about a year before the next major—a/k/a C-inspection—to see if there’s any cracking (such as at airfoil fillet radaii) that requires new parts so these can be ordered before time becomes an issue, and a casing lift can be incorporated into the outage plan.

This TIL was released in 2017 and since that time findings have been identified in about 20% (round numbers) of the units inspected. A chart presented shows that operating hours and temperature influence component condition.

TIL-2360, Potential for austenitic-blade root cracking.

This document is less of concern for combined-cycle units than the TILs mentioned previously. It applies to high-use units with austenitic blade material in the inlet stages. Recent work by the OEM revealed that the underlying root cause of the cracking was creep damage.

Note that “high utilization” is determined by a review of operating history. If it is in evidence, blading should be replaced at the next overhaul with a lower-utilization configuration to help mitigate the risk of premature creep.

The OEM learned that tooling being supplied to remove steam-turbine valve internals could yield under appropriate working loads, posing a risk of personnel injury and/or product damage. Recommendation: Replace tooling with improved capability and function prior to your next scheduled outage.

The TIL segment of the program finished with a look at what “damage” can occur to a steam turbine during periods of low load and cycling. This is particularly helpful in operational decision-making. Here are the damage mechanisms to be aware of:

Presentations on other steam-turbine topics made after the steamer TIL updates:

Parts planning is particularly important today, the group was told, given the long lead times associated with replacement capital components. The speaker pointed out that many steam turbines are unique from Day One and some parts must be made—often there are no spares on a warehouse shelf. A review of a given unit’s lifetime operational history, a collaborative effort between the OEM and owner/operator, is critical to proper planning.

These valves are designed for as little as 25 hours of operation per start, half of what had been recommended previously and more in synch with the operating paradigm forced on many combined cycles today. Another advantage of the durable next-gen valves is that their maintenance can be done on a C-inspection schedule rather than during B inspections.

Options for decarbonizing gas power, a topic at most—if not all—power-industry conferences these days, looked at both pre- and post-combustion solutions. For the former, the following zero- or low-carbon fuels were reviewed: hydrogen (blue, green, pink), synthetic methane, renewable methane, biofuels, and ammonia. Carbon capture by way of liquid solvents or solid sorbents in the exhaust stream, and oxy-fuel cycles, were the post-combustion processes discussed.

Alstom experience burning hydrogen in gas turbines, as reported at the meeting, includes the following: A blend of up to 5% H2 in natural gas for the EV combustor and 79% H2 for the GT8’s single burner combustor. Also said was that the GT13E2’s AEV combustion system has been cleared for burning up to 30% hydrogen in natural gas. Regarding the GT26, analytical work suggests that for mixtures of natural gas with up to 40% by volume of hydrogen, both fuels show the same physics.

The possible impacts of burning hydrogen in existing plants also were covered.

Generators were the subject of a solid presentation that most plant personnel probably would benefit from. The theme was “enhancing reliability to support life extension keeps fleets relevant.” The presenter, a highly experienced product manager, began by reminding attendees that the generator is not the turbine most attendees were familiar with. Example given: Its design incorporates organic materials, unlike the turbine.

The cyclic loadings characteristic of today’s operating environment are the source of stresses not experienced in baseload service, contributing to increased risk of forced outages (a chart illustrates this point well), and the higher probability of a rewind (15-20 years for a rotor, 25-30 years for a stator).

Typical findings during generator inspections impacting a given unit’s lifecycle include the following:

To reduce the risk and impact of unplanned rewinds, the speaker suggested the following actions:

Review of the following two generator TILs was suggested:

TIL-2119, Rotor pole-to-pole connector cracking. (Applies to generators manufactured between 1996 and 2015.)

The cyclic load during start/stop operation causes low-cycle fatigue and can lead to cracking. Several recommendations are made to users with these machines—including replacing pole-to-pole connectors with the upgraded configuration on units with 700 starts or more at the next scheduled inspection.

A pending TIL update regarding the repair of P2P connectors brazed on the rotor coils would allow work with the rotor inside certain models of generators. Get the details from your GE service rep.

Cracks have been found on these units where the two winding connections join the inner-most coils of the rotor winding with the radial stalk. In most cases only one lamella was affected. The good news: No forced outage has been associated with these findings.

Suggested action is a visual inspection of the winding connections. If crack indications are in evidence, a GE rep will work with the affected owner/operator to determine a proper course of action.

Evidence of rotor insulation damage has been identified during inspections which could lead to a ground fault. However, no such fault had been experienced in the fleet before the meeting. Root causes of the ground fault are explained in the TIL along with the consequences of insulation cracking. Summaries of the findings of thermal and finite-element analyses likely answer most questions users would have. Recommended preventive measures are described as well.

Issues with 21Z generators manufactured before 2008 was a subject of importance to many users. The concern is that some of these GVPI (global vacuum pressure impregnation) machines have suffered stator-core spacer migrations that should be addressed.

However, it is not so easy to rewind a GVPI machine. The simpler route, the speaker said, is to replace the stator with one developed in 2013 and designed to reduce core and endwinding vibration by shifting natural frequencies away from 120 Hz. A slide in the presentation explains how this is accomplished.

Discussion of spare parts closed out the generator presentation. GE recommends that owner/operators maintain an inventory of such strategic parts as wound rotor, spare exciter, stator bar kit, etc. The speaker noted that the lead time for a new generator, new stator, new rotor field, and excitation and controls all are 24 months or longer today. Lead times for various components and types of upgrades are provided.

To dig deeper on all topics discussed by the OEM during the conference, access the presentations on the GE Power Customer Portal (formerly MyDashboard). The new user interface features enhanced navigation to keep users informed on the disposition of TILs, provide the ability to follow your outage from planning to closeout, track parts orders, and retain reports and other documentation of importance—such as O&M manuals—in one location.