Many combined-cycle units originally designed for baseload operation are now required to cycle frequently, with still more starts and more rapid ramping over a wider range when in automatic generation control (AGC) mode. As a result, a significant number of heat recovery steam generator (HRSG) failures experienced worldwide have been at least partly attributed to inadequate steam attemperator control.

The two major objectives in the control of steam temperature are minimizing both the extent and periods of high temperature, and avoiding spraying to saturation temperature.

The former reduces component life because of thermal creep; the latter often is associated with cracking in downstream piping and in uneven tube heating and cracking.

The temperature control design typically installed in HRSG systems is very similar to that used in baseload drum boilers, and it has been the standard control structure for several decades. Improvements to distributed control system (DCS) technology have allowed enhancements—such as the calculation of steam properties, inclusion of nonlinear parameter adaption, and improved filtering and dynamic feedforwards.

By introducing an advanced steam temperature control strategy, HRSG operators might avoid periods of high temperature through the anticipatory action of sprays that can operate over a smaller flow range and have complementary influences to the main-steam temperature and pressure setpoints to reduce heat uptake disturbances. Benefits might include reduced temperature deviations, improved stability, and reduced actuator activity—all of which provide support for more flexible operation.

Testing of advanced strategies for steam temperature control. A study by EPRI surveyed advanced control system strategies for combined-cycle units. The project then selected two approaches for testing through simulation, subsequently testing one on a 2 × 1 combined cycle. The study and its findings are described in the EPRI report “Steam Temperature Control for Combined-Cycle Units: Survey and Testing of Advanced Strategies (3002106316).”

The computational capability of modern DCS processors has enabled the introduction of advanced algorithms to improve the control of complex, high-order, and interactive processes. A feature of all these algorithms is a model of the process and associated influences (either implicit, as an approximate inversion, or explicit) that direct the controller’s corrective actions with greater accuracy than a conventional PID controller, provided an appropriate set of process and influencing models has been determined.

The potential advantages of advanced HRSG steam-temperature control lie with the ability to reduce temperature deviations during startups and load ramping and other disturbances and to reduce overspray events by beginning to act earlier.

These four controller options were considered for the study:

A-PID, MPC. The project team selected two controller designs for the study: A-PID and MPC. The former was chosen because of its successful application on coal-fired boilers and because it required no advanced control modules (provided the DCS has a delay function block). A-PID is an extension of the well-known Smith Predictor, a model-based controller that effectively eliminates process response dead time, enabling controllers to be tuned with higher gain.

This is achieved by estimating the expected response to a controller output change, but with the dead time removed. The resulting signal is added to the process feedback so the controller “sees” a response to its output actions very quickly and responds appropriately. Then, after the dead time has elapsed, and the actual process begins to respond, the Smith model’s output is progressively removed with the same time constant as the process. This mechanism gives a smooth crossover from model to actual process input.

The MPC was selected for its potential to model and reject two independent disturbances, because it is capable of modeling “inverse” SH outlet temperature dynamics seen during load ramps. Plus, MPC modules were available for testing at the host site’s DCS, provided as part of an advanced control suite.

MPC has been growing as a powerful control concept, with many applications over the last three decades. The most prevalent application has been in chemical, refinery, and other process industries, but its capability to deal with interactive processes and its inherent ability to compensate for dead time and high-order processes lead naturally to powerplant control applications—such as steam temperature, sream pressure, and drum level control.

Simulation tests. Both the A-PID and MPC designs initially were tested with a PC-based plant/controller simulation (with Simulink™ modeling environment) to ensure the control structures functioned as expected and potential implementation issues were identified. The advantage of PC-based simulations is having unrestricted access to the models and enabling scenario testing faster than in real time. Success of this phase to test the controllers depends on the level of process model static and dynamic accuracy and controller emulation fidelity.

Subsequently, the two designs were configured on virtual DCS controllers and tested at the host site’s replica operator training simulator. Goals of the onsite simulator tests were the following:

Following extensive testing, the MPC design was selected for deployment at the plant. The design was installed and commissioned on one HRSG reheater temperature control loop. This arrangement enabled a comparison between the performance of the MPC (A-HRSG controls) and the original PID (B-HRSG controls).

A control switching facility also enabled a comparison to be made between a retuned PID control and the new MPC design on the same HRSG. Wide-range load-ramp tuning and benchmark tests were performed, providing data for a quantitative performance comparison.

Following MPC tuning, A-HRSG reheater MPC performance was demonstrated as significantly superior to the existing PID control still operating on the B-HRSG. It was also shown to be more stable and faster responding than the retuned and optimized PID control of the A-HRSG.

The A-PID controller was relatively easy to tune with the system identification tuning calculation tools. The design gave a fast, stable control capability. Some tracking issues related to cascade control windup and resetting contributed to the inclusion of a saturation protection limiter were particular to the DCS and not necessarily an impairment to the design concept.

The A-PID design, based on a modified Smith Predictor, is best suited in applications with large dead time and high-order process responses, as noted earlier—such as those found on large drum boilers with a single-stage desuperheater. Investigators found that the final stages of the HRSG superheater and reheater have lower-order responses; however, they are more prone to disturbances because of their relatively lightweight tubing and rapid variations in gas temperatures during startups and load ramps.

For the SH controls, the split-range valve design performed well, but in its present form, the A-PID did not achieve significantly improved disturbance rejection on the simulator. The reheater (RH) temperature control with the A-PID was superior to the standard PID for both stability and disturbance rejection. This is because the response model of the RH was of higher order, and so some of the features of the delay and order-reduction functions came into play.

The MPC facility’s capability to input two independent disturbance variables inputs was used to advantage on the reheater to reject the disturbance caused by load changes on both the A and B gas turbines (GTs). The SH outlet and disturbance response models vary significantly over the GT load range. Because the MPC is not adaptive, two MPCs were used with a fuzzy blending (weighted average) function to slide between controllers, which were sufficient to cover the entire load range.

For the MPC design to provide significantly superior performance during load ramps, the structure must include an output feedforward signal predicting the expected attemperator outlet temperature. The MPC design, as implemented for the tests, provided significant improvement to temperature disturbance deviations, time to settle, periods away from setpoint, and overall stability. The final design for the reheater MPC functional outline is shown in the figure. 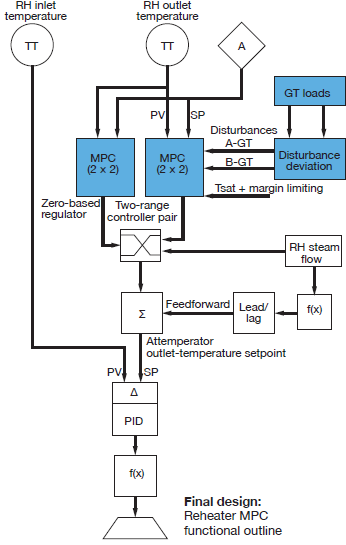 The bottom line: The study demonstrated the application of advanced steam-temperature control strategies on a combined-cycle plant, and provided quantitative assessments by benchmarking performance against the classical cascade control structure previously applied at the host site. CCJ

Steve Seachman is principal technical leader in the Instrumentation, Controls, and Automation Program for the Generation Sector at the Electric Power Research Institute.