The optimization of the utility production and delivery system at the University of Texas, Austin (UT-Austin) is the poster child for a work in progress. After all, you don’t optimize a 90-year-old powerplant, one with a mix of really old boilers and state-of-the-art gas turbine/HRSGs overnight or even in a few years. It’s also a glimpse into the new world of microgrid integration with utility grids, although you’d hardly call this one “micro.”

Five years ago, CCJ editors visited the Carl J Eckhardt Heating & Power Complex to report on the plant’s use of state-of-the-art optimization and analytics software  and numerous major equipment upgrades and additions. The plant delivers electricity, chilled water, hot water, and steam to a campus of more than 160 buildings serving over 50,000 students.

The editors stopped in during a jaunt through central Texas in January 2018 to get some detail around presentations given by Associate VP Juan Ontiveros and Associate Director Roberto Del Real at last year’s Ovation™ Users’ Group Conference, held in Pittsburgh. “We’ve now optimized the distribution network, not just the production facilities,” they said.

Critical pieces of the most recent optimization effort are the upgrade of the Ovation Electrical Control Energy Management System (ECEMS), dozens of hardwired sensors, and a new chilled-water storage tank. The ECEMS replaces manual control of the four major electrical tie-lines and regulates the campus grid/municipal grid interface with these two overarching goals in mind:

Simply, the controller monitors the purchased power during each 15-min demand period. The logic calculates the amount of purchased power (MW), which is in excess of the demand limit. When this number is greater than zero, it is the responsibility of the generator load-control program and load-shedding program to ensure that the demand limit is not exceeded.

Campus internal generation is increased by the amount of power generated by this logic. This also gives the campus the ability to sell power back to the grid when the opportunity is presented. Real-time internal production costs and current grid market prices are used to constantly balance internal generation, purchased power, and power sales. At the same time, the ECEMS monitors hundreds of discrete load points with the capability to remove load in less than 100 milliseconds (ms).

UT-Austin also has optimized the chilled-water grid so that it uses the least amount of pumping power to meet demand. This has reduced peak pumping from 70,000 gal/min to 40,000. Differential pressure (dP) between supply and return lines, measured at key buildings on campus, is updated in real time while the pumping speed gets adjusted to follow a low-dP set point in endless iterations with a rate-of-change of 0.25 dP/min. 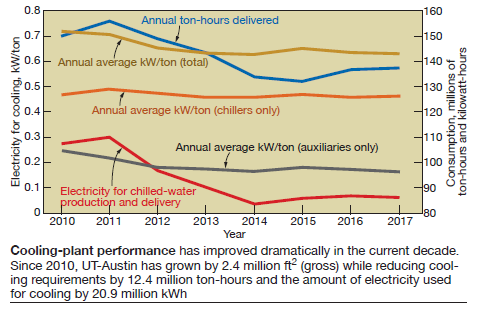 This low differential pressure has the benefit of satisfying campus demand with less pumping power. The lower-speed flow set points also are optimized in other chilling stations while keeping one assigned for controlling dP. Pumps are equipped with variable-frequency drives (VFD) which lower speed, thus achieving maximum accuracy and controllability.

Because pumping horsepower varies with the cube of rpm, reducing flow has a dramatic effect on power consumption. But it also has a positive impact on O&M: Over-pumping can lift the seats in the control valves and lead to other maintenance impacts.

The plant is equipped with 18 electrical chillers but now, because the optimization effort, occasionally only one chiller unit is needed during some winter periods to serve the entire campus. With the dramatic drop in peak cooling load came a drop in steam flow to produce the required electricity. The plant no longer has to over-deliver cooling at too low of a temperature in winter; now it is able to set the chilled water system at 44F, rather than 39F. This temperature reset follows outside air temperature linearly between 80F and 55F.

Electrical production efficiency is maximized when plant output stays below 70 MW, noted Del Real and Ontiveros. Campus peak load is 60 MW but the powerplant has a maximum production capacity of 140 MW. By adding a 6-million-gal chilled-water storage tank, they explained, they can “shift” 10 MW during the night, make and store chilled water, and “baseline” the most efficient gas turbine/generator. Cutting out a chiller in the summer is an easy way to shed electric load, with stored chilled water from the off-hours making up the difference.

Thus, another goal of the overall strategy is to run the most efficient turbine/generator, the LM2500 installed in 2010, eight months out of the year, as opposed to four earlier.

The Ovation ECEMS controller gives the plant the capability to “island under any configuration of generators” (the defining characteristic of a “microgrid”). Said Ontiveros: “During islanding, load shedding becomes really important and the chilled-water storage acts like a big battery—it allows us to ramp the generators comfortably.”

Having 70 variable-frequency drives (VFDs) with inverters, as well as numerous other inverters operating in the system, brings its own unintended consequences: Harmonics and low power factor because of non-linear loads and inductive motors, respectively.

The ECEMS includes an automatic VAR control system, which summons VARs out of the generators to maintain a minimum 95% power factor. Advisory control is also a key feature that helps the operator making decisions on which capacitor bank should be brought online for voltage control. The city tie is kept at net unity power factor.

Said Del Real: “The grid connection is what controls our grid frequency. If separation from the city grid occurs, and if the load were to exceed generation, we would then need to shed load fast enough to ‘beat’ the disturbance, requiring a 100-ms response.”

Thus, the ECEMS continuously analyses and updates campus electrical demand, advises the operator on when to stage capacitor banks in and out of service, monitors generator load profiles, and regulates city purchased power while maintaining appropriate power factors in a system that’s become more sensitive because of the presence of dozens of sensitive loads.

Views into the “real-time energy dashboard” built into a campus mapping app allow operators to drill down to the building level (though not sub-metered) and see meters which are not working, monitor all utility flows, and even auto-text outage information to building custodians. Meters are also used to automate the billing to individual customers.

On the plant management side, another consequence has been that the facility is saving significant money on fuel because it operates at optimized production and delivery points, but fixed costs are higher because of the need to maintain the new equipment and demand-side strategies. As with many owner/operators, campus administration loves the cost savings but investing it back into the facility? Not so much.

Yet the performance quest, and the work in progress continues. Del Real said they are investigating transformer efficiency monitoring and “right-sizing” transformer capacity (since they tend to be oversized) as the next steps in optimization. CCJ