Regardless of where you fall on the 3Hs of the H2 economy—hype, hope, happening soon—everyone can appreciate a seminar which delivered information on actual experience. The webinar, “Hydrogen: Utilizing Combustion Turbines as a Solution to ‘Low to No-Carbon’ Initiatives,” was presented by PSM (Power Systems Mfg LLC).

After a quick review of global-climate headlines, Jeff Benoit and Katie Koch, PSM, noted that while “gas turbines are a core pillar of decarbonization,” the world is woefully behind in meeting 2030 and 2050 global carbon-reduction targets being emphasized by the climate-science community.

The good news, according to PSM, is that “gas turbines can be a long-term part of the eventual zero-carbon power grid, and can be ‘future-proofed’ sooner rather than later.” If batteries and other storage systems represent grid-scale, shorter run-time options, H2 represents a gigawatt-scale, long-term energy-storage option.

As one example, renewable energy that might otherwise be curtailed, or even excess nuclear power, can be used to power H2 production units with the fuel stored in the same underground formations used for natural gas, other hydrocarbon fuels, and compressed air. While long-range and large-scale transport and distribution of H2 in the existing natural gas network present challenges, such as piping embrittlement and sealing, the US and Europe have proven large-scale H2 distribution networks connecting industrial process facilities. 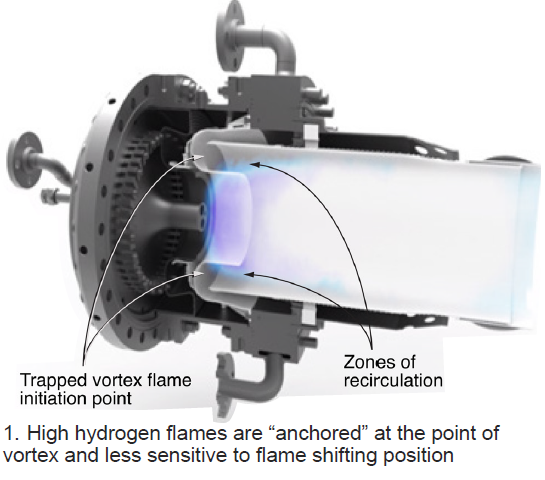 PSM’s sweet spot of experience, however, is at the combustor. At a 3 × 0 9E GT customer site in The Netherlands, being deployed specifically for H2 combustion-technology development, H2/natural-gas fractions from 9% to 25% (field demonstration of 35%) have been fired successfully for four years with no impact on turbine life, with NOx emissions held to 9 ppm or below, reports Benoit.

PSM is also participating in a Dutch-government-subsidized program to develop its FlameSheet™ combustor as a “platform” for 0 to 100% H2 firing.

“In Stage One of the program, PSM and sister company Thomasson retrofitted an existing 1.8-MW OPRA OP-16 engine with a scaled version of FlameSheet and tested it for up to 100% H2 by volume. Stage Two will be scaling the FlameSheet to additional applications.” That will be followed by a demo project on additional frame units to achieve the project goal of up to 100% H2 on units varying between 1 and 500 MW, while keeping emissions in check.

Meanwhile, an F-class unit also has been retrofitted with FlameSheet and has been field-demonstrated with a fuel mixture containing up to 5% H2, the limit representing the amount of hydrogen available for this unit. The FlameSheet has been tested in the rig for F-class conditions at full pressure and full temperature for up to 80% H2 by volume without emissions excursions.

Seven 501F and 7F gas turbines (with an eighth being installed in December 2020) are currently operating commercially with a FlameSheet combustor, simply described as a burner (or inner combustor) with a conical flame sheet around it that promotes a trapped vortex mechanism which allows higher flame velocities to be maintained.

The flame is said to be “anchored” at the point of vortex (Fig 1) as defined by geometry and, therefore, less dependent on fuel constituents. Fig 2 shows a FlameSheet combustor being installed in an F-class gas turbine. 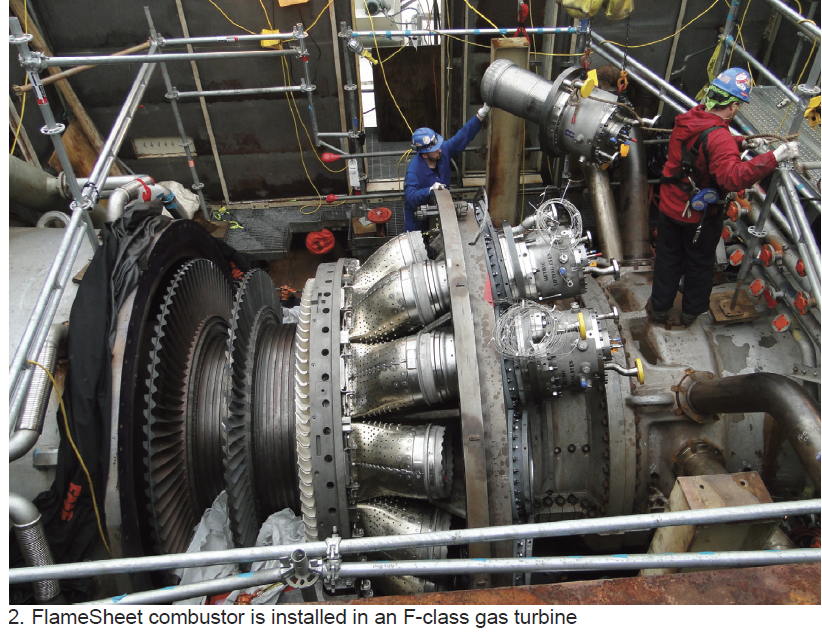 In addition to FlameSheet, PSM has demonstrated that its AutoTune controls will greatly contribute to successful H2 firing (Fig 3). At its base, AutoTune can continuously measure the constituents of the fuel mixture, then automatically adjust the combustor fuel/air mixtures to improve reliability and maintain stability. This functionality is already in practice today for a variety of shale gases with variable heating values. Even within the Marcellus and Permian regions, natural-gas heating value can vary significantly. 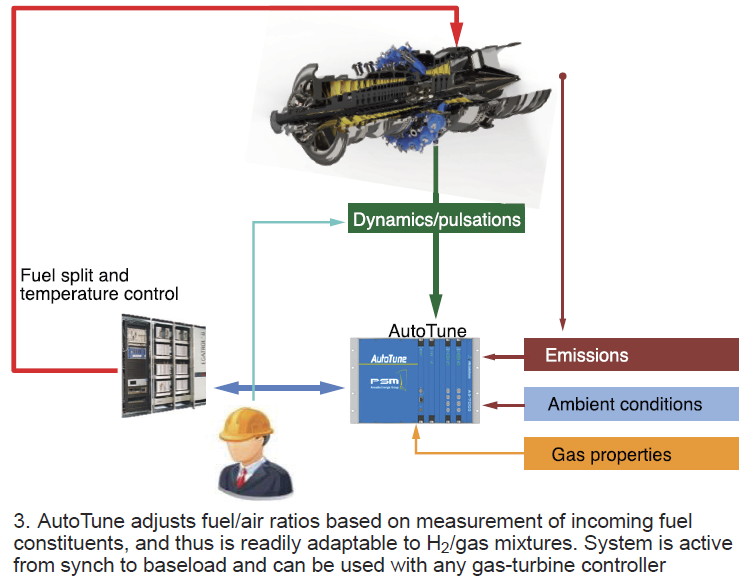 Differences in combustion properties with higher and higher H2 fractions are not trivial, stresses Benoit. Combustors are typically designed for a narrow range of natural-gas properties. H2 has higher reactivity, and “wants to oxidize quicker,” which can lead to high flame speeds, flames migrating into the metal, and flashback. In addition to ensuring stability of combustors firing these mixtures, AutoTune solves a variety of combustion challenges.

GT owner/operators don’t want to lose their cycling and start/stop flexibility. While AutoTune has proven it can handle transient upsets, Benoit notes that “you don’t want to start up or stop the machine with high H2 fractions, so it’s best not to start on H2 from a safety standpoint, but instead transfer to an H2/gas blend at full premix mode. He also notes that many customers purchased FlameSheet specifically to improve load-following.

Finally, maintaining low NOx and CO emissions is a challenge with H2, but premix combustion is key here and even more critical. Although conventional premix combustors are limited in their ability to burn H2/gas mixtures, PSM sees AutoTune, combined with the aforementioned combustion technologies, as the key to successful firing in such GT-equipped machines.

For pragmatic entry into the H2-to-power market, Thomassen, in conjunction with OPRA Turbines of The Netherlands, can ready a “turnkey clean energy package” (Fig 4) that pairs a containerized 1.8-MW GT/generator with a skid-mounted, packaged proton PEM or atmospheric alkaline electrolyzer driven by low-cost or negatively priced electricity to produce and store H2 for scheduled firing in the GT. Fuel skids qualified for hydrogen are available as well through various supply-chain methods.