Owners sometimes don’t appreciate how quickly equipment becomes obsolete—control-system hardware and software in particular. In this case, the General Electric Co HMIs purchased in 2001 to interface with the plant’s Mark VI DCS and turbine controls became outdated during the abnormally long construction period. 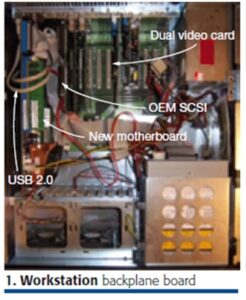 Simply put, the response time of the original HMI stations did not satisfy today’s requirements. Plant personnel had two choices: Purchase new HMIs from the OEM or upgrade the existing equipment in-house. Economics dictated the latter.

Matt Easterday of AEP’s Region 7 engineering group, which serves the company’s eastern gas fleet, was responsible for evaluating upgrade options. Limited by a tight budget, he focused on working within the scope of the existing software while upgrading hardware to the degree possible.

Replacement of the obsolete motherboards, SCSI hard drives, CRTs, and video cards eliminated the bottleneck in processing the vast amount of information provided by the control system. Additional displays helped as well by facilitating access to information required by control room operators.

This was the first time an upgrade of this type had been undertaken by AEP’s Region 7. The entire project was accomplished on staff and without OEM involvement. Key project participants at Dresden were Plant Manager C R Gillespie, O&M Supervisor Ron Borton, and Nathan Adams, an operations supervisor. Adams noted, “Experience with older-design HMIs has shown their response time to be woefully inadequate to perform with a modern distributed control system.” 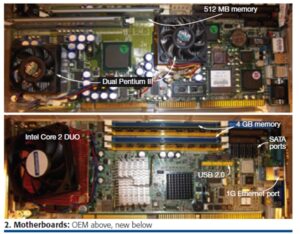 The upgraded system both reduces screen latency when switching among Cimplicity displays and the time it takes the displayed data to populate. Plant personnel say the upgraded HMIs have little or no screen latency today and two to four times the original display capability.

Other benefits realized by the upgrade project include the following:

Experience. The new hardware out performs the old in many ways (Table, Figs 1and 2). A faster processor on the new motherboard offers 2.8 GHz of CPU speed, which together with the new video cards, is capable of handling quad screens using a tree. The old CRTs could not be configured in this manner. With more RAM and increased CPU speed, the GE Toolbox can be opened while multitasking through several displays.

The SATA’s 1.5-Gbps access speed strongly outperforms the older SCSI in data transfer rate. Plus, the low cost of a SATA drive, compared to an equivalent SCSI drive, makes cloning a drive for backup purposes a viable option.In this type of scheme, the existing HMI drive is cloned and then replaced with the cloned drive. 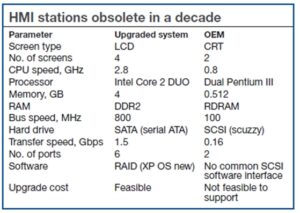 Thus, the HMI runs on the cloned drive with a known, reliable back upon the shelf. If a hard drive were to fail, the backup can be installed and operational in a short amount of time.By comparison, the old SCSI drive forced a backup with CDs and a boot disk. Many times the old CDROM and floppy drives would fail and leave no backup or no ability to restore the HMI from a failure. The use of cloning or imaged drives for disaster recovery of a system also is a much easier process to document when considering NERC CIP requirements.

The new motherboard offers some side benefits as well. The modern BIOS (basic input/output system) allows for the use of larger hard drives.Plus, the new motherboard has several USB2.0 ports which eliminate the need for the questionable floppy and CD-ROM drives for transferring or copying files. Files can be copied toa maintenance laptop using the 1GEthernet port on the motherboard without disrupting or disturbing the plant or unit data-highway connections. CCJ