Virtually all owner/operators of gas-fired generating facilities will have to change existing plant practices and thinking to meet the requirements of the “Provisional Standard for the Commissioning and Maintenance of Fuel Gas Piping Systems”—this to protect personnel and equipment against explosion and other hazards associated with the use of natural gas.

If you didn’t attend the CTOTF Spring Turbine Forum (April 10-14, Palm Beach Gardens, Fla) you may not know about NFPA® 56, and as a plant or asset manager you should come up to speed quickly on this. It’s a “game changer,” according to Pat Myers, who manages AEP’s Ceredo Generating Station in Huntington, WV. He also leads his utility’s Natural Gas Fuel Facilities and Operations Review Team.

NFPA 56 provides minimum safety requirements for the commissioning and maintenance of fuel gas piping—from the point of delivery to the equipment shutoff valve—found in powerplants and industrial and commercial facilities. Activities impacted include the cleaning of new or repaired piping systems, placing piping systems into service, and removing piping from service.

The term “system” applies to all components—including valves, regulators, and other appurtenances—and any segment of the system that can be isolated from it.

Many users may be familiar with the National Fuel Gas Code, NFPA 54, which covers fuel systems up to 125 psig, but excludes powerplants. It essentially was developed as a standard for homebuilders. At present, there is no nationally recognized standard directed at natural-gas-system commissioning and maintenance activities for powerplants. 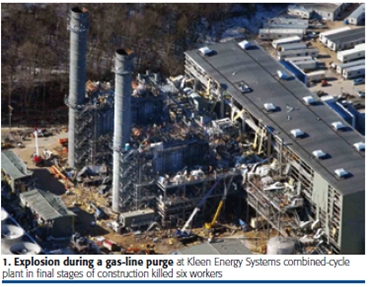 Ten deaths and dozens of injuries related to gas explosions over the last two years caught the attention of the US Chemical Safety and Hazard Investigation Board and others. First step in understanding why gas explosions occur and how to avoid them is to watch the Deadly Practice video at www.csb.gov (click link on CSB’s home page).

The CSB is an independent federal agency charged with investigating chemical accidents. It does not make policy. Rather, CSB tries to guide others to address issues when gaps in safe practices are identified. The Board reached out to the Electric Power Research Institute and the National Fire Protection Assn to help make more safe gas-handling operations in the electric power industry.

The high-profile explosion during a gas-line purge at Kleen Energy Systems LLC’s 2 × 1 combined cycle under construction in Middletown, Conn, Feb 7, 2010 (Fig 1), that killed six and injured many others, pushed the development of NFPA 56 into high gear.

Several months before this event, CSB had issued a bulletin, “Dangers of Purging Gas Piping into Buildings.” Just days before the Kleen Energy explosion, the agency approved urgent safety recommendations to strengthen NFPA 54 provisions on purging. This prompted an appropriate Tentative Interim Amendment to the National Fuel Gas Code by NFPA on Aug 25, 2010.

The NFPA 56 draft standard (download PDF document at www.nfpa.org) is scheduled for revise in committee before mid year. When this work is complete, a final draft will be issued for industry review. The plan, according to one committee member, is to have the standard finalized before yearend.

The first hint of NFPA 56 came early on the first day of CTOTF’s week-long Spring Turbine Forum when AEP’s Myers presented on his company’s proactive program to prevent—to the extent possible—a gas explosion at its generating plants. The Ceredo plant manager was in Palm Beach Gardens to accept the CCJ’s top Best Practices Award for Safety Procedures & Administration. 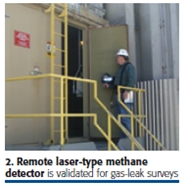 Myers is a seasoned veteran, having spent more than 20 years at a gas transmission company before moving to the customer side. He told attendees that AEP and its affiliated companies had a huge investment in gas-fired generating plants—23, plus four coal-fired facilities with gas-fired boilers, and several other plants under construction and planned.

Executives were committed to assuring that the company’s gas plants were not susceptible to events such as those experienced at Kleen Energy. Rather than waiting for standards, they decided on taking interim measures to ensure AEP was providing the highest level of personnel safety during the handling and use of natural-gas fuel.

A multi-disciplinary team of generation and safety and health professionals was formed. The group was charged by its executive sponsors to evaluate the safety of the companies’ internal requirements, practices, and physical plant designs associated with the use of natural-gas fuel. Targeted activities included venting, purging, blowing down, and line-charging. activities. Program goal was to make recommendations for improvement.

The team, led by Myers, began work early in March 2010 and submitted its draft findings on the last day of August. The executive sponsors fully endorsed the report, he said, which was organized in six focus areas: design, construction/startup, operations, training, management of change, and benchmarking.

The sponsors authorized moving forward with certain recommendations immediately, Myers added, and directed the team to continue its ongoing efforts in other areas—including the development of draft checklists for conducting gas-focused inspections of all the companies’ facilities. The process of handing-off responsibility for inspecting the entire fleet and implementing recommended improvements began at the end of last year.

Myers then summarized the team’s successes by identifying natural-gas safety programs put in place or in progress. These are presented in the article developed from information supplied by AEP in support of its Best Practices Awards entry. Access at www.ccj-online.com, click “Archives,” click “1Q/2011.”

Since the awards entry deadline of Dec 31, 2010, more progress has been made, including the following:

Business as usual will be over when NFPA 56 is released later this year. Myers focused on AEP’s proactive efforts to make its plants safer workplaces and mentioned NFPA 56 in passing. Other companies may need more incentive. John Puskar, PE, CED Combustion Services Group, Cleveland, left no doubt that the NFPA 56 motivator was forthcoming in his presentation before the Pratt & Whitney Roundtable the day after Myers accepted the Best of the Best Award for AEP.

Roundtable Chair Bill Clark of Constellation Energy invited Puskar, who sits on the 18-member NFPA 56 committee, to walk CTOTF members through the draft requirements of the new standard and to help them develop a plan for compliance. Interestingly, the committee includes only one owner/operator of generating facilities.

Puskar opened with the exclamatory statement, “Your world is changing!” Next he provided a brief overview of his firm’s expertise, generally unknown to attendees. CEC, founded in 1981, has a staff of more than 40 focusing on inspection and testing, fuel piping safety, training, and retrofits and service work associated with natural gas and fired equipment.

Puskar stressed to the GT users that NFPA 56 was sure to impact their regular operational activities and now was the time to begin developing new work procedures, planning upgrades, etc—the same things that Myers said AEP was doing—to facilitate the transition to the new paradigm.

Assuring safety in the commissioning and maintenance of natural-gas piping systems is not without its hazards. Consider nitrogen, for example. It typically is needed three times: for pre-repair purge (at least three volume changes), pressure testing/leak checking, and post-repair purge (to get air/oxygen out of the system). Be mindful, Puskar said, that one full breath of nitrogen can strip the blood of oxygen and could cause loss of consciousness.

Purge hazards also were covered in the presentation. Gas has no natural odor, the consultant reminded. It is odorized by the utility with mercaptans, but many plant sites are not supplied with odorized gas. Utilities typically design to detect 1% gas by volume. It takes 4.3% to be at the lower explosive limit, but human smell degrades with age. Plus new pipe and rust absorb mercaptans. The point: Don’t trust your nose to keep you safe.

Puskar’s presentation offered hints on proper gasket selection, valve sealants, and valve servicing, as well as simplified piping diagrams to illustrate correct purging and venting procedures, etc. You can access his slides from the CTOTF home page at www.ctotf.org. Click “NFPA 56” in the navigation bar left.

Wrap-up. After Puskar left the podium, CTOTF Chairman Bob Kirn of TVA remarked, “The presentation on the NFPA 56 draft with its potential impact upon combustion turbine operations is a great example of ‘value-add’ discussions that CTOTF provides to the industry through its forums and on-line discussion groups.

“With user-group sessions and communications networks serving as an extension of in-house technical services departments, the ability to acquire accurate information promptly is more valuable than ever before. Understanding critical issues such as this was one of the major reasons that CTOTF expanded its program to include an Industry Issues segment.” ccj 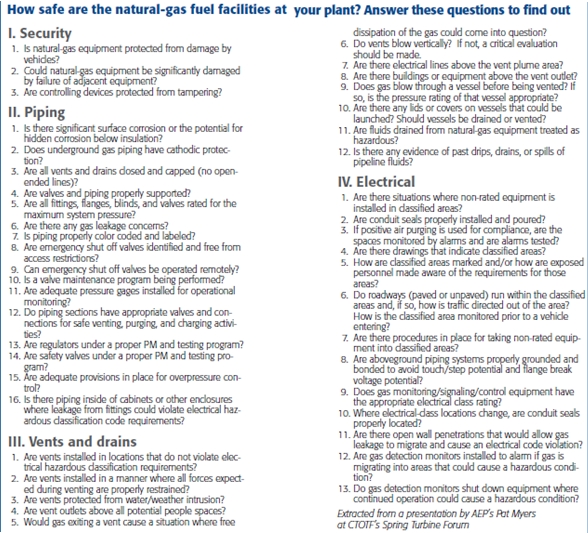