The scene: Simple-cycle 7FA startup on a quiet Sunday afternoon. About 30 minutes after the button is pushed on the gas-only unit, compartment thermocouples read 300F; 15 minutes later, 350F. Operator checked the engine and saw a blowtorch-like flame shooting out from a combustor end-cover. The unit was shut down immediately. Inspection revealed the flame had burned through the blank flange covering a superfluous liquid fuel port (Fig 1).

The cause: Investigators found that the seal ring under the blank flange permitted air in-leakage (Fig 2), thereby reducing the pressure drop across the fuel nozzle and allowing the flame to attach itself to the nozzle (Fig 3). An attached flame causes events such as the one described.

This was another of those “first-time” incidents that others had experienced. The speaker identified five more plants that had experienced the same issue after making a few phone calls. He believed this to be an emerging fleet problem. Here’s what the user suggested: 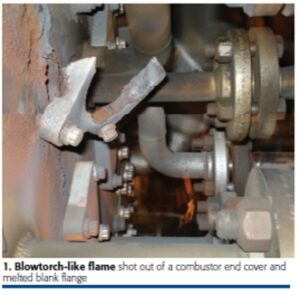 A conference call with technical experts from GTE’s facilities in Duncan, SC, and Troy, NY, revealed the company had recently received an end cover from a different customer with damage very similar to that described by the user at the CTOTF meeting (Fig 4). The two owner/operators agreed to share data and permit GTE to conduct a root-cause investigation to determine if any changes in hardware, maintenance, or operational practices could reduce the potential for such failures.

Several possible causes for the failures were identified and evaluated using the latest engineering tools—including three-dimensional CFD and FEA analyses. Destructive examination of hardware and materials analyses of parts and deposits found in the end covers also were conducted.

Investigators determined that a leak at the blank flange, if large enough, can cause hot gas at the nozzle tip to flow back into the end cover where it ultimately will cause a complete failure of the blank flange. This failure cascade was consistent with the observed nozzle and end-cover damage.

The leak at the blank flange described in the CTOTF presentation was caused by a seal failure. One of the two seals employed by the OEM at this location is manufactured with a thick cladding which can oxidize heavily and break down at typical 7FA-e operating temperatures. Engineers also found that the bolts used can be too short to fully engage the Heli-Coil locking feature. These findings, alone or in combination, can lead to an air leak at the blank flange and initiate the failure observed.

GTE has worked with a manufacturer to identify a more suitable seal for this location. The company said it provides this new seal—and the proper bolts as well—as part of GTE’s overhaul services for 7FA+e end-cover assemblies. This hardware also is available to customers as a replacement kit.Investigators said that, at this time, the end-cover failures described appear limited to 7FA+e gas-only combustion systems. However, GTE is evaluating other 7FA combustion system hardware to see if similar changes should be made on those systems as well.

Finally, the GTE engineers said that because blank cartridges commonly are removed to borescope units between combustion inspections, special care should be taken to use new seals and properly torque bolts to the recommended levels. Failure to do so has resulted in similar end-cover failures. ccj