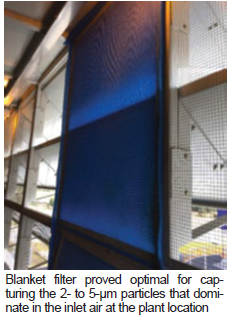 Dust clouds overwhelmed the inlet filters during the dry season at this LM6000PF-powered 3 × 0 peaking site in an agricultural area near Mexico City. Compounding the challenge at Energia del Valle de Mexico (EVM I) was dust from the construction of a new combined-cycle plant only three football fields away.

Typically, pre-filters were saturated with dust after only five weeks of service and the resulting high pressure drop across the air inlet, and significant compressor fouling, reduced power production by an average of 4% over the year. Plus, the final cartridge filters were being replaced every six months, instead of the planned annual change-out.

A study by plant staff pointed to large particulates as a primary cause of rapid filter fouling. Evaluation of alternatives for extending the service lives of both the pre-filters and final filters focused on eliminating the problematic particles between 2 and 5 µm. A washable polyurethane Poret® foam blanket with 10 pores per inch, and supplied on a roll by manufacturer EMW filtertechnik, was selected as the pre-filter curtain. The expected material lifetime was three years based on a blanket washing interval of five months. Blanket cost per engine: $1000.

The foam blankets, which were installed by plant staff, had a pressure drop of 0.28 in. H2O right out of the box. Washing was recommended when the pressure drop increased to 0.5 in. By the end of the implementation period, the plant reported having achieved almost constant power output throughout the year at a higher capacity factor than was recorded in the previous 12 months.

Offline washing of the three units was more effective after installation of the foam blankets, with “great improvement” reported in compressor power and efficiency. The blankets also allowed staff to increase the interval between compressor washings from three months to six and to get longer life from both the pre-filters and final filters. Without the blankets it was necessary to replace the pre-filters every four months and the fine filters once or twice a year. Today, the pre-filters are changed out annually and the fine filters every two years.

A decade and a half after COD, Missouri River Energy Services’ Exira Station, a 3 × 0 LM6000PC-powered peaking facility, located in southwestern Iowa, found itself with obsolete control systems in a rapidly evolving industry requiring the latest technology to assure safe, reliable, and profitable operation.

Here’s an overview of the challenge:

Add to this the need to upgrade the following: (1) chiller controls, (2) analog-type valve drivers to digital, (3) security cameras and software, (4) the plant network and the network connecting the plant to dispatch.

There were two primary goals for the project:

Work on the project started about two years before the physical effort began, with the development of a preliminary scope which was sent to various vendors for budget estimates that could be submitted to the board for consideration.

Project benefits. Today, Exira has all the main control systems—turbines, BOP DCS, and cooling tower/chilled water—on the same Rockwell Allen Bradley platform. Because all the systems are Allen Bradley, the interfaces among the systems are seamless, eliminating the server formerly used to translate the communications among all subsystems to get them to work together.

The controls network for Orange Grove Energy (OGE), a two-unit (LM6000) peaking facility located in Pala, Calif, was antiquated. Old software and a complex structure exposed the plant, owned by J-Power USA Development Co and operated by NAES Corp, to breakdowns and outages attributed to the lack of redundancy and knowledge on how to restore lost components.

OGE’s control room was home to eight displays and five stations equipped with a computer, keyboard, and mouse (figure). Additionally, there were another four HMI displays, keyboards, and computers at the facility for the OMTs.

The solution was to convert the entire OGE control system to virtual machines (VMs) running from a single Microsoft hypervisor. The VMs include balance of plant, CEMS, historian, engineering workstation, ADS, domain controller, and surveillance-camera server and workstation. To make the virtual system redundant, there are two workstations that use a remote desktop to control the VMs and two hypervisors that replicate the VMs between each other.

The two workstations can operate the plant concurrently and independently of one another. In the unlikely event that one of these VMs should fail, the VM can be recovered by either starting the replicated VM from the other hypervisor or restoring it from a nightly backup. 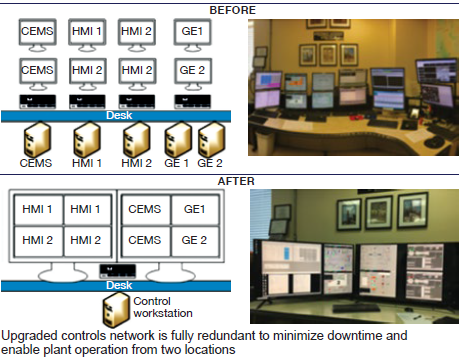 Orange Grove now depends less on hardware upgrades and maintenance since the VMs are running from a newer, more-robust server, reports Plant Manager John Hutson. This is a fully redundant system to minimize downtime and operate the plant from two different locations. As an added benefit, staff can access the VMs remotely for troubleshooting or plant operation. The control room workspace is much cleaner, less noisy, and requires less power and space since there is only one workstation, keyboard, and mouse—as opposed to five.