In today’s topsy-turvy world of electric-power generation and delivery anything can happen, and it does. Recall that only a couple of years ago, the OEM with the largest position in the generation sector purchased a major competitor and tried to take by storm the industry’s aftermarket business—worldwide. That might have led some to conclude that other companies would shy away from investments in outage, maintenance, and repair activities and there would be fewer options for powerplant owner/operators.

Doosan had a small footprint in the North American electric-power market at the time, which is why you might not be familiar with the company. But it has been a force in Asia, Europe and the Middle East for decades. Doosan may have been best known here for its fossil-fired boiler and combustion systems expertise and products gained through the company’s acquisition of Mitsui’s Babcock Energy Ltd in 2006.

Gas turbines. Doosan has a gas-turbine manufacturing history that dates back to 1991, when it was licensed by GE for its Frame 6B. In 2007, it also was licensed to produce gas turbines by Mitsubishi Hitachi Power Systems for its M501F and M501G.

Today the company is transforming itself into an OEM, expecting to introduce a 270-MW (60 Hz) engine to owner/operators in 2022. Full-scale/full-load tests are scheduled for mid-2019 to mid-2020 in Doosan’s Changwon (Korea) manufacturing facility. Development of a 340-MW (60 Hz) H-class engine is well underway with design completion anticipated about a year after commercial introduction of the F-class machine. Previously the company developed and tested a 5-MW gas turbine/generator which was offered commercially in 2009.

Changwon is an “A to Z” manufacturing facility for gas turbines, as it is for steamers, handling everything from the production of producing castings and forgings through engine assembly and testing. A big plus for gas-turbine customers is the facility’s capability in the manufacture of turbine and compressor discs for all legacy engines. Inconel discs are under development.

DTS, which opened its doors as Advanced Combustion Technology in 1996, expanded dramatically in both size and capability in the second decade of the new millennium and today has a global footprint among the industry’s leaders in aftermarket gas-turbine services (Sidebar 1).

Future plans include a cold-rotor coating facility and final expansion of the rotor building to 420 ft long.

Industrial gas turbine (IGT) component repairs were the company’s bread-and-butter until 2012. The editors visited the original shop of the founding owner during a user-group meeting in the mid-2000s and the expanded facilities in the same location near Houston’s William P Hobby Airport early in this decade after the company was purchased by an investment group.

The new, high-tech La Porte shop, toured by the editors in February 2018, dwarfs its predecessors with more than 100,000 ft2 of production facilities on an 11-acre site with room to expand (Sidebar 2). ACT had begun transitioning to La Porte under the direction of industry veteran Billy Coleman in 2012 with the opening of what it called its Phase 1 rotor shop.

Doosan’s La Porte complex is divided into five active shop areas, with a sixth set aside for expansion when necessary:

Particularly important to gas-turbine owner/operators are the rotor and heavy-mechanical capabilities added as part of ACT’s expansion in the 2011 to 2017 period before the sale to Doosan, and since. Today, the company has a Tier-1 F-class rating by major power producers and ISO 9001 and OHSAS 18001 certifications.

The La Porte team’s accomplishments in rotor repair are a source of great pride at DTS. Forty GE rotors, Frame 3s through 7FAs, have been repaired there already—including five 7FAs in 2017, two with complete unstack/re-stack (Fig 1). One rotor had a long history of problems and was running with up to 6 mils vibration. Repairs reduced that to 1.2 mils, validating staff capabilities. 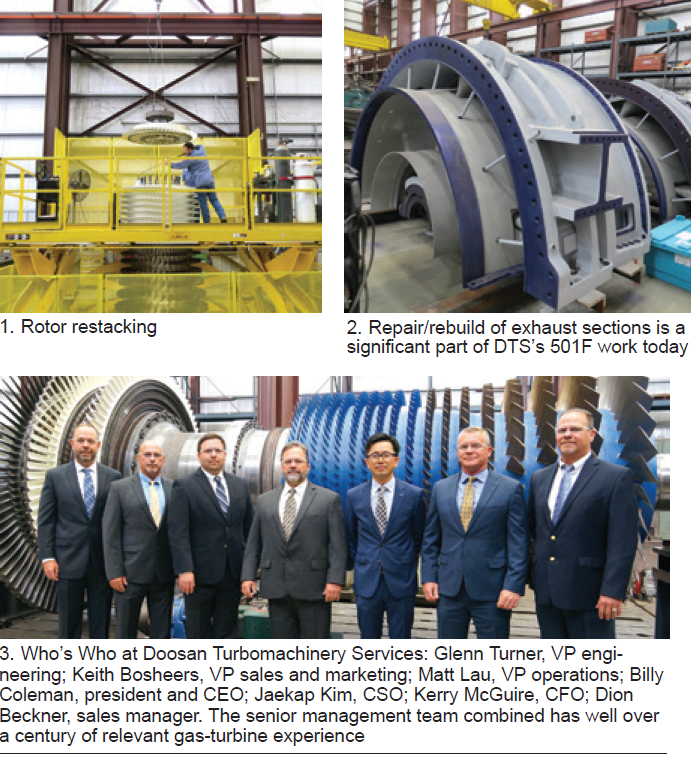 Doosan’s first 501F rotor was at La Porte during CCJ OnSite’s visit. Replacement of the torque tube and air separator were among the action items. Other noteworthy 501F work involves the exhaust system where issues abound, at least according to presentations and discussion at user-group meetings. Seven two-piece exhaust systems, overhauled and upgraded with Doosan’s zero-hour mod, have been returned to service (Fig 2).

The management team (Fig 3) stressed DTS’s wide range of repair experience on both new and mature engine technologies and its work in developing innovative engineered solutions to solve chronic issues facing users. The following stops were included in the shop tour: