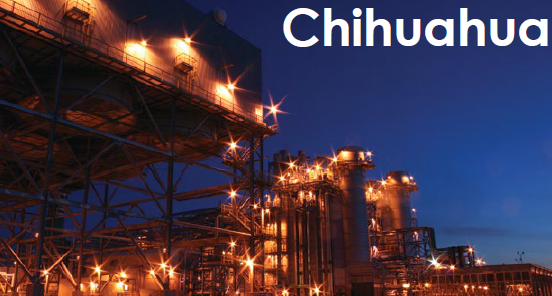 However, some tools are not conducive to real-time analysis of a variable because of the time it takes to identify the TAG name of the instrument and to extract its data for subsequent graphing, filtering, and analysis. In some cases, such as when several variables are involved, the process of data acquisition and analysis can consume valuable time—time you may not have when a potential trip situation exists.

With the objective of reducing the analysis times of variables involved in the power-generation process, the empowered staff at Savvi Energía’s Chihuahua III 2 × 1 combined cycle, equipped with Alstom GT11N2 gas turbines, used PI ProcessBook to reproduce each of the control-system screens (Fig 1), enabling personnel to access them on demand and view at any time the current value of each variable, plot its trend, and confirm equipment status (on/off). 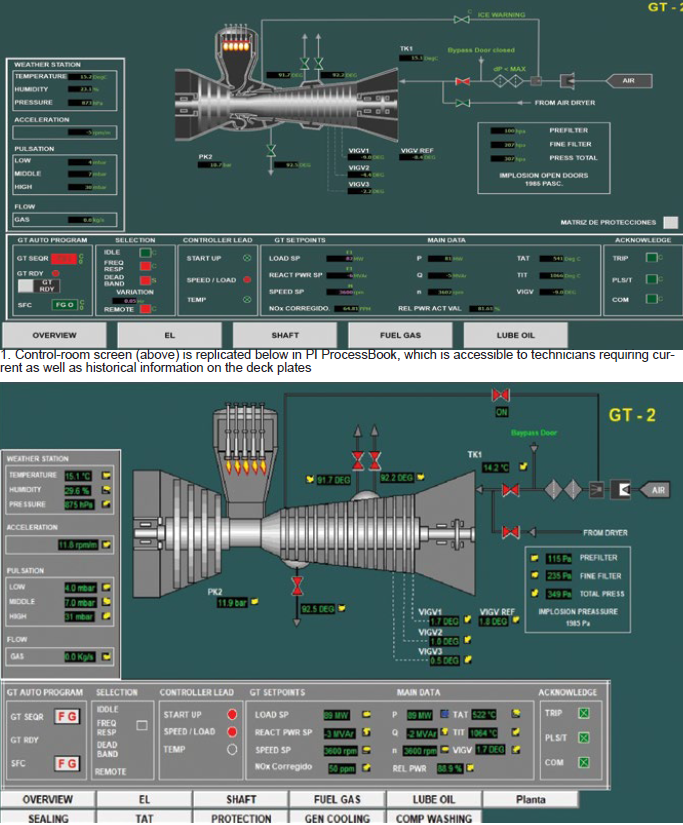 This allowed Plant Manager Daniel Cepeda’s team to monitor the behavior of each system in the plant remotely as if they were in the control room. Plus, during an unexpected event, the origin of the cycle imbalance can be analyzed simultaneously with different scenarios, shortening the detection time of the fault.

Added benefit: This monitoring tool allows new employees to educate themselves on the navigation among the different control-system screens, thereby achieving operational confidence without committing an error that could affect plant operation.

The utility of PI ProcessBook screens was enhanced with additional information—such as the protection matrix and the identification of critical instruments. Additionally, shortcut buttons were included to link information related to equipment—such as manuals, fault reports, data plates, P&IDs, and photos.

Results have been impressive. Before the enhanced PI ProcessBook screens were available, each time technicians were assigned a maintenance task on a critical piece of equipment they had to go to the control room and ask the operator about the recent behavior of equipment associated with the work order. This could create anxious moments if the operator was unavailable to provide the assistance needed in a timely manner.

Today, with the required information available remotely, well-trained O&M personnel can access it on their own, without delay. Thus, any negative impact on plant operations likely can be avoided. The proof: This best practice contributed significantly to plant reliability—including a run of 232 consecutive days without and event affecting generation dispatch and an annual percentage of unavailability of 0.18

Inspection windows in headers proved valuable for identifying material degradation on the water-side of the HRSGs related to flow-accelerated corrosion (FAC), water-chemistry issues, and other causes. For example, windows cut into the upper headers of the low-pressure evaporators pinpointed damage in the curves of the risers. The information and perspective gained from this investigative effort is being used in the formulation of a plan to replace 68 upper curves in the two boilers.

A clue to the existence of additional damage can be seen in Fig 2, which shows windows were cut into adjacent headers near their respective end caps (the one on the right already welded closed) to assess tube damage. This could indicate that the gap seals in the gas path between these left and right modules are not properly positioned or are in poor condition and permitting increased gas velocity in the gap to cause the end-most tubes to run hotter. A condition such as this can drive the FAC found at the upper bends and also contribute to fatigue damage because of the tube-to-tube temperature differences.

A careful review of the plant’s cycle chemistry also was conducted because of the inspection findings. Iron solubility is influenced by pH, pressure, temperature, and the tube material (alloy). Staff fine-tuned Chihuahua’s chemistry to mitigate FAC. Specifically, the pH range was increased from 9.2 to 9.8 to 9.6 to 10.0 and dissolved oxygen, which was below 5 ppb, is now maintained between 10 and 20 ppb.

Tube plugging. When a tube wall is breached because of FAC, fatigue, or other reason, it can be challenging to decide between repair and plugging. Some arguments to consider include, time, material, qualified personnel, and budget. So, during an inspection you hope for the best, but must prepare for the worst. Chihuahua is prepared with plugs, welding gear, and other equipment required to open headers and plug the upper and lower ends of a failed tube when this course of action is required (Fig 3).

To identify the exact location of a damaged tube, plant staff uses a laser meter. It is pointed to where the water leak is located and measures the exact distance. The same distance is measured from the top of the HRSG to prevent cutting at a location away from the fractured tube. To access the upper and lower windows, fixed marine stairs are installed to help protect workers from injury, minimize downtime, and reduce the cost of labor and scaffolding.

Staging of duct burners. Eight-element duct burners were incorporated into the design of Chihuahua’s two HRSGs. As installed, the burners were unstaged—meaning all eight operated when the supplementary system was called into service without considering the steam requirements for a specific dispatch. This caused a supply/demand imbalance that could be so great as to require the throttling of steam inlet valves.

Modifications were made to allow staging—the step-by-step operation of the elements through gradual modulation of the gas control valve. This results in better control of steam generation without putting the balance of the cycle at risk.

The best practices outlined above contributed to the rapid inspection and repair of Chihuahua’s HRSGs, making it unnecessary to extend a 2.5-day minor maintenance outage. This contributed to an enviable availability run of 232 days and an annual 99.82% availability.