Discussion on the turbine section always is robust at Frame 6 Users Group meetings, likely because there are many “senior” machines in the fleet—those with well over 100k operating hours. Current thinking of the OEM and a few others is that an end-of-life inspection should be done at about 100,000 hours and that the rotor should be replaced at 200k.

One of the users said he thought there might be an economic benefit to simply replacing the rotor at 100k, at least for 6B engines, because vibration issues are common after an EOL inspection and machines generally run very well after installing a new rotor. Another attendee’s experience added credibility to this suggestion. He said excessive wear was found in the dovetails of the third-stage wheel for one of his units during an EOL inspection and the heavy coating applied in the worn areas presented issues during restack.

Frame 6 veterans had good advice on parts and coatings for attendees having limited experience this frame. When you’re in the market for parts, know the specifics of what you need. Specifications are critical to the bid process. Attention to detail is important: “If you get it wrong,” the group was told, “your machine will not operate as well as expected.”

Regarding coatings, one user mentioned that the OEM offers an “optimized coating,” enabling a choice based on operating paradigm. It was said that some coatings are better suited for baseload operation, others for peaking service.

First-stage buckets generated significant give-and-take. One user said getting anything but the 16-hole airfoils was challenging. Another user, noting that new first-stage buckets don’t have TBC, asked if other attendees were adding a coating to ensure a 24k interval and one more repair cycle. Adding a coating might not make sense, one colleague replied, it depends on your business goals. “Are you looking for reliability or performance?”

One user concern regarding new first-stage buckets is that cooling holes are so close to the squealer tips that a rub could block air flow. A suggestion was to always check cooling holes when you can to be sure they are open.

First-stage nozzles. TBC is optional; however, repairs can be very expensive if you don’t specify a coating. But be careful: If you “go crazy” with TBC, you might restrict air flow and adversely impact performance. Specify TBC thickness and be sure the shop measures it. Remember, too, if you add TBC to a nozzle that didn’t have it previously, some metal must be shaved off to accommodate the coating thickness.

An attendee troubled by TBC spallation and trailing-edge damage was told not to worry too much because they would not wreck his machine.

Shroud blocks. The group was told that casings like to ovalize over time. Remove shroud blocks until you get to one with the minimum clearance and shave down the ones removed. First-stage shroud blocks must be recoated, not those in the second and third stages; however, you can have challenges with the latter because of honeycomb seals. Be patient, ovalization stops at some point.

Exhaust flex seal eventually will crack and fail because of the challenging operating environment. A telltale clue is over-amping of the exhaust fans, which can’t get enough cooling air into the bearing tunnel. A quick visual inspection of the flex seal was recommended each time the shell is off. If you are not familiar with the exhaust system, look at the photos here taken during the inspection of a 7F machine which is similar in design to the 6B, but larger. 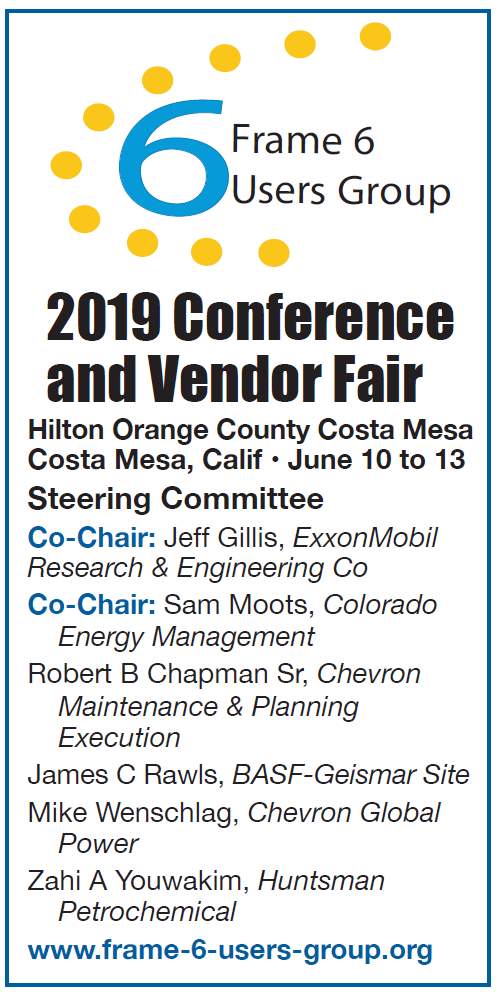 Auxiliaries, generators. There wasn’t as much discussion as you might expect on auxiliaries, but the allotted one-hour time slot in the 2018 program was shared with generators and excitation. Best for users with concerns/questions on this equipment is to send an email to Co-chairs Gillis and Sam Moots (via conference organizer Greg Boland of Creative Ventures Holding) a couple of weeks in advance of the coming meeting and get them on the discussion agenda.

A user described a load-coupling failure on a 1990 unit. He said the OEM replaced the coupling in 1998 because of high vibration, but it failed on startup after 50,000 hours of service. GE wanted a year to deliver a replacement so the owner went to a third-party supplier and purchased a similar coupling. Shortly thereafter, it was said, the OEM issued an advisory to plant personnel saying that it had “lost faith” in its coupling.

Torque converters and the ratchet mechanism got some air time with one user saying that if the latter is not ratcheting, the torque converter likely is the main cause of the failed start. Another user reported binding of the ratchet shaft. Yet another was a problem with varnishing of the sequencing valve—severe enough to require disassembly and cleaning at every major.

Load-gear oil leaks were introduced by a user trying to determine just what is “acceptable leakage” is. He attributed the leakage to a design issue.

A stator rewind was the highlight of the generator session. The user described the removal of the stator frame which was then sent to the shop where the work was done. Project was considered a “great success” by the owner.

The combustion session encompasses discussion of fuel nozzles, liners, flow sleeves, transition pieces (TPs), crossfire tubes, igniters, flame eyes, and combustion cans and piping. One snippet of advice from an attendee: Never buy new flow sleeves. You can repair them many, many times. However, having a spare set on hand was viewed as prudent.

Discussion of combustion hardware was lively. It was said that the OEM only guarantees 15 ppm NOx but that you’ll probably see 9 ppm on 24k DLN hardware. A user said his unit comes in at around 5 ppm using third-party hardware. DLN1+ users reported 3.5-5 ppm.

TPs and first-stage nozzles were not fitting-up properly, one user said, despite flat and square picture frames. Another participant stressed putting TPs and nozzles on a flat surface before installing. Yet another user suggested sending the first-stage nozzles and TPs to the same vendor at the same shop. This enables set up in a proper fixture to mitigate fit-up issues.

Recommendations from the floor: