Safety has taken center stage in the electric power industry. It is now one of the top three discussion topics at virtually all user-group meetings serving gas-turbine (GT) owner/operators. Another way to gauge the industry’s safety consciousness is to visit www.ccj-online.com and compare the number of safety and O&M entries in the COMBINED CYCLE Journal’s Best Practices Awards program this year with those from five years ago. In 2008 there were more than twice as many entries in the O&M category than there were in safety; this year, there were one-quarter more safety entries than O&M.

The open discussion sessions at the annual HRSG User’s Group meeting focus strictly on the technical aspects of heat-recovery steam generators, leaving safety off the main program. But with upwards of half the user attendees first-timers, many of whom are new to the industry and may not be aware of how just how seriously plant managers view safe work practices, Chairman Bob Anderson worked a primer on the subject into the Maintenance Workshop conducted the day before the “main event” last February 28-29 at the Hilton Americas in Houston, Tex.

Anderson, a principal at Florida-based Competitive Power Resources Corp and former plant manager at Progress Energy steam and combined-cycle plants, was the right person to handle this assignment. His goal was “awareness,” not to conduct a safety course. He told the editors he would have been surprised if industry veterans didn’t know almost all of the safety dos and don’ts included in his presentation, “Identifying—and Avoiding—Combined-Cycle Hazards,” but believed his common-sense approach to safety would be of value to the “recruits.”

Anderson began by telling the group of about a hundred users that building and nurturing a safety culture is a prerequisite for operating and maintaining a safe plant.

He defined “safety culture” as a constant commitment to safety that permeates the entire organization. But while this is an essential step, he continued, it is only one of several.

Another essential step: Identify the real-world hazards present in the plant and implement practical procedures to avoid them. Anderson said that based on his experience, the specifics of these procedures are best managed at the plant level, not by safety professionals at headquarters. This is particularly challenging at thinly staffed combined-cycle plants, he added, where the onsite safety leader usually has multiple responsibilities.

Other safety challenges at combined-cycle plants may include inexperienced personnel and a heavy reliance on contractors. Many technicians and operators come from other industries and are generally unfamiliar with powerplant operations, Anderson said. Plus, with the typical combined-cycle complement numbering two dozen or fewer personnel, you don’t have the relevant expertise on staff to handle anything much beyond routine maintenance.

Odds are contractors will be unfamiliar with your plant and its safety best practices and may require comprehensive indoctrination for certain assignments, as well as continuous oversight by plant employees.

To discuss the specific hazards found in combined-cycle plants in an organized manner, Anderson sorted them into these five categories:

“Merely moving around” hazards include trips, falls, burns, chemical inhalation, eye contamination, hearing damage, etc. They are the easiest hazards to avoid, through conscientious use of hard hats, eye and ear protection, respiratory gear, proper footwear, gloves, good housekeeping, good lighting, etc. Unfortunately, Anderson noted, these are the hazards that also are the easiest to overlook because you walk by them daily and become complacent about the dangers they pose.

Because such hazards often are hard for site personnel to identify because “everything looks normal,” plant managers may use the buddy system for auditing. This is how it works: Plant A sends three or four of its most safety-conscious employees to Plant B—and vice versa—to conduct an audit with a “fresh eye.” Sharing of ideas and experiences is especially productive. 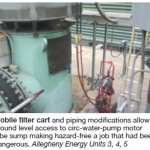 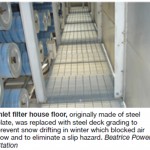 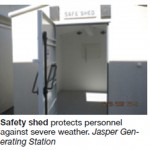 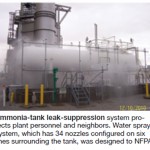 The hazard in this first category with, perhaps, the most lethal potential is the confined space. Moving into such areas as HRSG casings, steam drums, condenser steam side, etc, before they are properly vetted can lead to serious injury or death. In particular, the confined-space atmosphere must be checked to assure sufficient oxygen to support life and the absence of poisonous/explosive gases.

The photos distributed throughout this article illustrate ways plants are mitigating “merely moving around” hazards. The generating plants identified received Best Practices Awards within the last three years for sharing their ideas with the global community of gas-turbine users. You can access many more safety best practices by using the search function available at www.ccj-online.com.

Anderson said the most common source of uncontrolled fluid release is a pressure-boundary breach caused by material failure. Typically, the fluid release is sudden, violent, noisy, and accompanied by substantial movement of equipment and structural components.

Those in the immediate area of an uncontrolled release, he continued, can be injured or killed by asphyxiation, burning, scalding, falling, or being struck by flying debris. Injuries also have occurred while the startled worker is franticly trying to escape the area.

Shifting into high gear, Anderson appeared to have the group’s undivided attention. “Although we cannot precisely predict when an uncontrolled energy release might occur,” he said, “we can precisely predict where. As plant leaders we need to identify the specific locations in our facilities that are most vulnerable and take steps to minimize personnel risk. All employees and contractors should be made aware of these areas so they can avoid them when possible and be mindful of a safe means of egress whenever they need to work there.

High-energy steam piping was one of the areas of concern mentioned by the former plant manager. He had a special respect for joints where dissimilar metals or P91 materials are welded, noting that both the P91 material and its welding are intolerant of any deviation from proper thermal treatment. If you see steam or condensate escaping from a pipe’s lagging, Anderson said, “Leave the area and report your finding to the control room immediately.” An immediate precautionary shutdown is in order. Do not remove insulation to investigate the leak while the pipe is still pressurized. 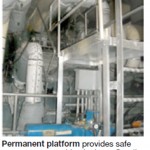 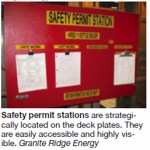 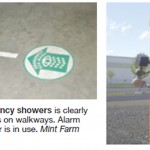 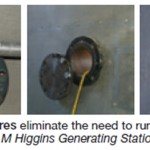 The speaker mentioned several other places where uncontrolled releases of steam might occur in quick succession. When he got to steam-drum manway gaskets, he paused. Many plants continue to suffer gasket failures, Anderson noted, and continue to experiment with different solutions. “But this is a serious safety problem and no place for a trial-and-error approach. The manway door and the gasket, together, comprise an engineered system that must be properly designed, operated, and maintained according to the OEM’s specifications.

Steam is not the only dangerous fluid, Anderson said, shifting gears. Uncontrolled releases of hot gases also present serious hazards, he said. Specific locations where vigilance is necessary include the following:

Don’t forget, too, the speaker went on, that uncontrolled releases of seemingly harmless fluids like compressed air and water can cause injury. Examples: Debris sent airborne by the sudden release of a fluid, the whipping action of an unsecured compressed-air hose, flashing of pressurized high-temperature water when the pressure boundary is compromised, etc.

Controlled releases of fluids also are of concern. They may be sudden and unanticipated, as with the lifting of safety-relief valves; or planned, as with the opening of vents and drains. Either can pose a safety hazard because the actual point of fluid release typically is far from the actual valve or vent. 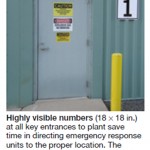 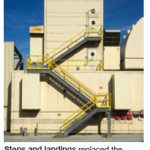 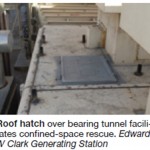 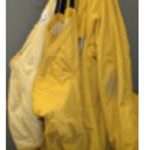 A contractor may be standing near the safety-relief discharge, unaware that a steam-pressure excursion is about to cause an automatic lifting of that valve. Or a plant operator manually opening vent valves may not know that a mechanic happens to be tackling an unrelated maintenance job, right near that vent’s discharge point.

Safety-relief valves pose yet another concern. They often are surrounded by a large cloud of steam, hot water, and debris because of the inherent gaps in the valve upper body, discharge nozzle, and vent/stack connection. If such a cloud envelops a nearby walkway, a normal egress route might be blocked.

As with an uncontrolled release of fluids discussed previously, you can reduce the risks associated with controlled releases by identifying the specific locations in your plant that are most vulnerable and making them well known to staff and contractor personnel.

Normal plant configurations. Plant systems typically are lined-up in one of a handful of normal, well-understood configurations. This facilitates such plant operations as GT ignition and loading, steam system warm-up and loading, plant shutdown, and overnight layup. As the plant O&M team gains experience, it naturally becomes competent and comfortable with the normal configurations and procedures.

However, Anderson said, as a person with supervisory responsibilities, you must ensure that the staff’s comfort zone does not expand into complacency because there are many hazards associated with a normal plant configuration.

For example, many components are energized automatically by the control system or remotely by a control-room operator challenged by time constraints and revenue goals. Although intentional, the sudden actuation of valves, pumps, turbine shafts, and compressors can injure personnel near the equipment who are caught unaware. Components may actuate unintentionally as well because of equipment malfunction or operator error.

Both intentional and unintentional events often produce startlingly loud noise, which can cause permanent hearing loss to an unprotected worker or plant visitor. Hazards attributed to equipment failure or operator error include:

Abnormal plant configurations. A powerplant typically is most hazardous when plant systems or personnel are in an abnormal configuration. During these times, the valve and equipment line-ups are generally unfamiliar to the plant staff, and also extremely complicated—creating conditions ripe for mishap—such as chemical releases, environmental spills, etc.

A hazard of abnormal plant configurations is the need to sometimes connect piping and equipment rated for different pressures. Equipment failure or inappropriate operation of these interconnections can quickly cause over-pressurization and catastrophic failure of the lower-pressure system. Examples here include auxiliary steam ties between units and ties among high-, intermediate-, and low-pressure boiler drains.

Anderson closed with several examples of abnormal plant configurations that have serious safety implications, requiring careful consideration and special procedures to prevent injury to plant and/or contractor personnel. They are:

Leaving the podium, Anderson reminded the group that safety is a never-ending battle fought day-in and day-out. Ultimately, he said, it is your engaged and effective leadership that assures the well-being of all persons inside the plant fence, not corporate programs, catchy slogans, or cute posters hanging in the break room. CCJ