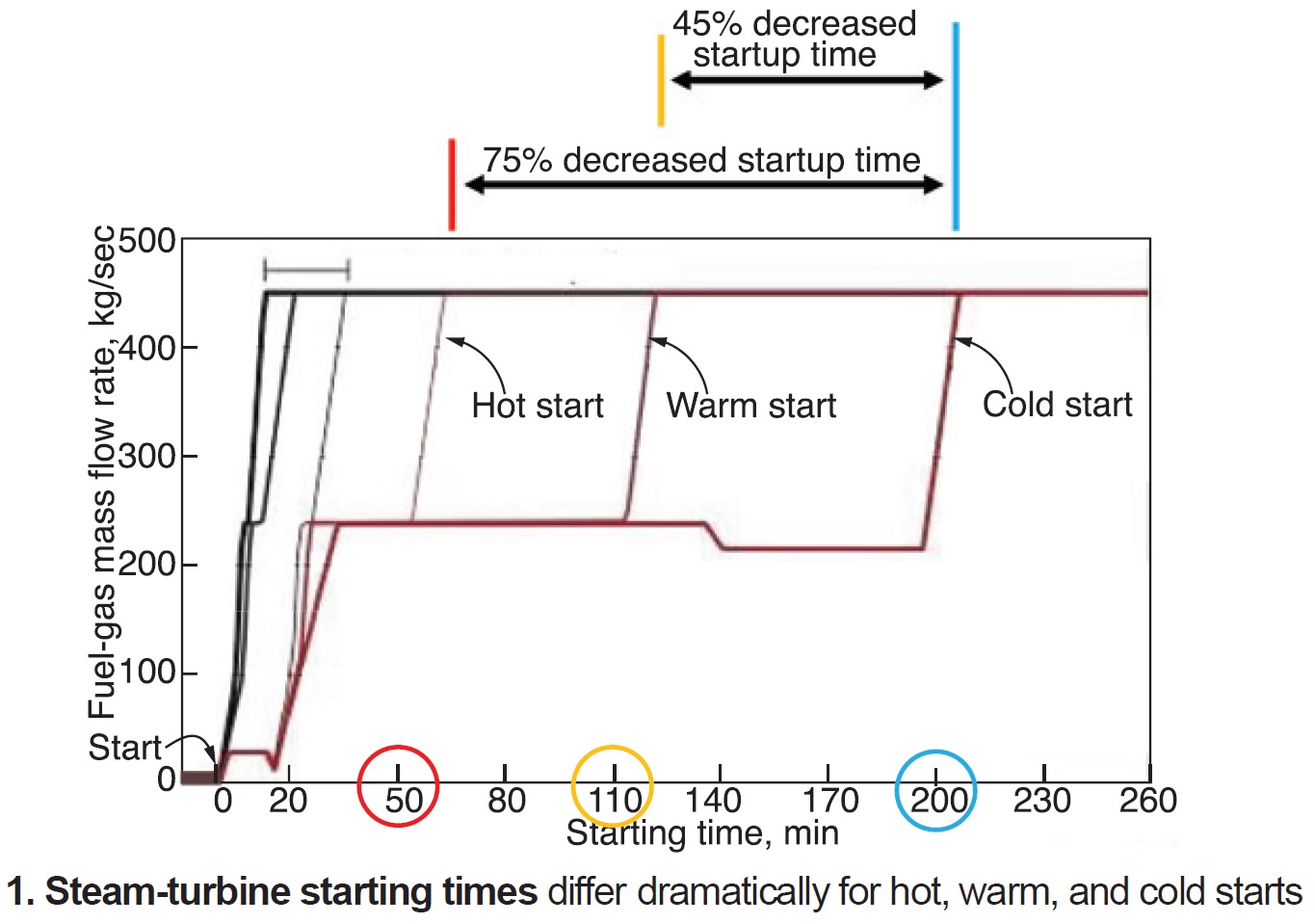 Modification of combined cycles designed for baseload service to produce power reliably and efficiently when wind and solar energy are not available to “fuel” renewables generation has been ongoing for about a decade.

The first step was to achieve faster starting of large frame gas turbines and enable those machines to more quickly respond to changes in electrical demand. Accomplished. Next, was to provide steam turbines and their valves greater operational flexibility, while at the same time reducing stresses seen from recent cycling uptakes. In progress. Still to come: Building more operational flexibility into heat-recovery steam generators and steam systems.

This article focuses on the success of Germany’s Arnold Group in developing a highly engineered turbine warming system capable of mass customization to complement the flexibility of today’s gas turbines in satisfying the unique operational requirements of any combined cycle. The information presented here was sourced from discussions and presentations at user-group meetings, and interviews, both formal and informal, with plant personnel having relevant experience.

Turbine warming systems are not new. But until the Arnold system was introduced to the market about five years ago the products available typically resembled your grandfather’s electric blanket—heating wires incorporated into the fabric (insulation). Issues included less-than-ideal fit-up to the turbine casing (contributing to “heat leakage” and uneven casing stress) and relatively poor long-term durability (because of their susceptibility to step and other damage).

By contrast, Arnold marries the turbine warming system with an independent insulation system featuring interlocking high-performance blankets that conform perfectly to the turbine surface. More on the Arnold designs later.

When Norm Gagnon, Arnold’s lead product manager in North America, spoke before the 7F Users Group last May (2022), he raised the level of respectability for warming systems saying their purpose was turbine thermal conservation, stress risk mitigation, and cycle optimization—rather than merely a method for heating metal. He was followed on the program by Pierre Ansmann, global head of marketing, who spoke about the company’s technically advanced insulation system.

Benefits of warming. Gagnon began by asking, and then answering, the question, “Why does anyone need a turbine warming system?” The former maintenance manager for an F-class combined cycle said there’s need for optimization in the startup cycle to do the following:

Regarding the reduction in starting time possible by use of a turbine heating system, Gagnon shared Fig 1. However, he believes the conventional terms “cold, warm, and hot starts” will slowly disappear from the lexicon, replaced by a focus on shell temperature to manage thermal fatigue and with hot starts becoming “standard” given the advantages stated in the bullet points above.

Arnold says its combination warming/insulation system is the only one commercially available worldwide capable of maintaining turbine casings at hot-start temperatures on D11-style combined-HIP-casing units for at least 10 days after a unit shutdown.

Fig 2 presents real-world data from a 2 × 1 7F-powered combined cycle with a D11 steam turbine that shows use of Arnold’s warming and insulation systems cut between two and three hours from the time it takes for the unit to achieve 95-MW output after a 100-hr outage. This was cited as “typical” by the supplier, which has more than five dozen similar systems operating, being installed, or on order worldwide. 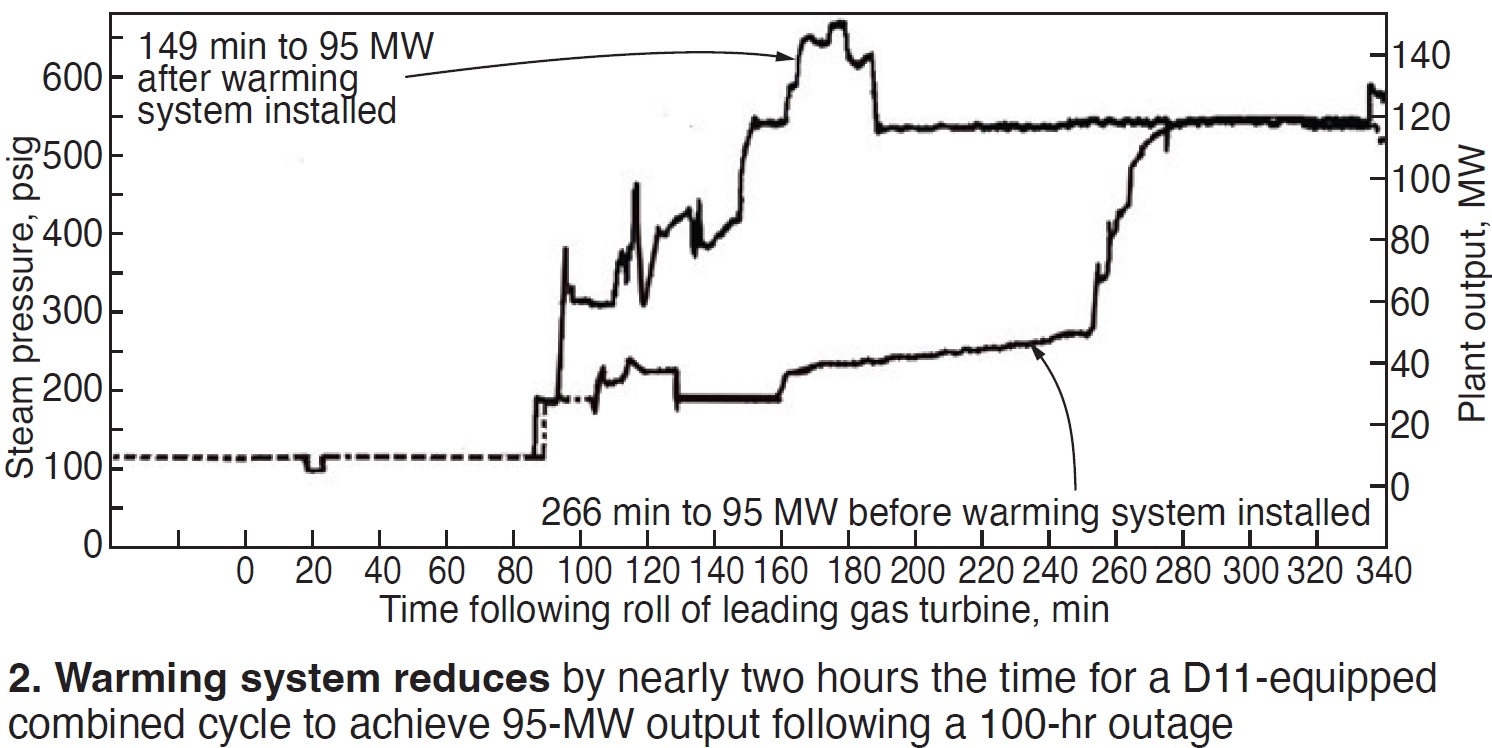 Operational flexibility. Gagnon spent a significant portion of his podium time at the 7F meeting discussing the critical need to maintain all turbine sections at near-equal temperature during the shutdown period to allow restarts on demand without damage caused by rubs, rotor bow, etc.

The Arnold system has proven its ability to keep upper and lower casing halves to a ΔT of only a few degrees, as well as to control rotor shrinkage and casing axial growth to avoid so-called “rotor-short” and “casing-long” conditions.

These benefits are achieved by use of a network of independent thyristor (analog)-controlled heating zones—about two dozen for a D11. Use of an analog system for this purpose is much more precise than traditional on/off digital controls. Approximately 100 thermocouples, fixed to the casing exterior surface, verify that each zone is responding correctly and is at the specified temperature. The t/cs also confirm even heating and casing stability across the unit.

Gagnon pointed out that after shutdown, and absent a heating system, the temperature of the upper casing stays warmer than that of the lower casing for several days because heat flows from hot areas to colder ones and top-casing insulation offers less heat-flow restriction than the thicker bottom insulation.

Fig 3 compares the temperature differential between upper and lower casings of a Spanish D11 before the Arnold warming and insulation systems were installed (curves at top) and after installation (curves at bottom) on the same machine. The difference in the ΔT between the upper and lower sets of curves before the warming system was activated is attributed to the superior quality of the Arnold insulation. Note, too, that with the warming system in operation, the ΔT for a weekend outage was less than 10 deg F. 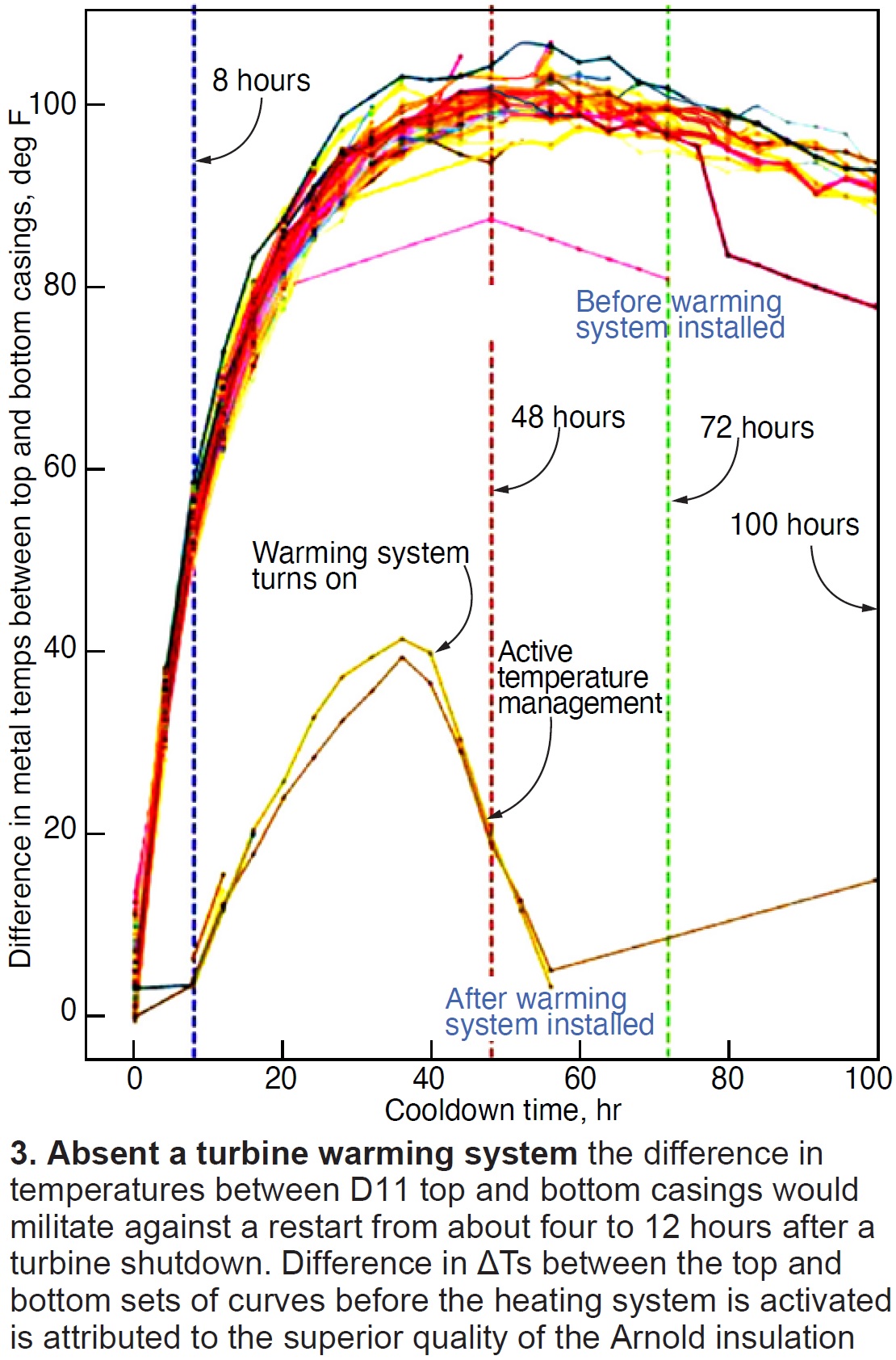 Of particular importance from an O&M perspective is that the heating system for the lower half of the steam turbine is mounted on the casing and is “permanent” (Fig 4). A heat-reflecting shield over the heating cables maximizes system effectiveness; redundant heating circuits enhance the solution’s reliability. The heating system for the upper casing is form-shaped to the specific casing onsite and is removed as necessary to accommodate maintenance. 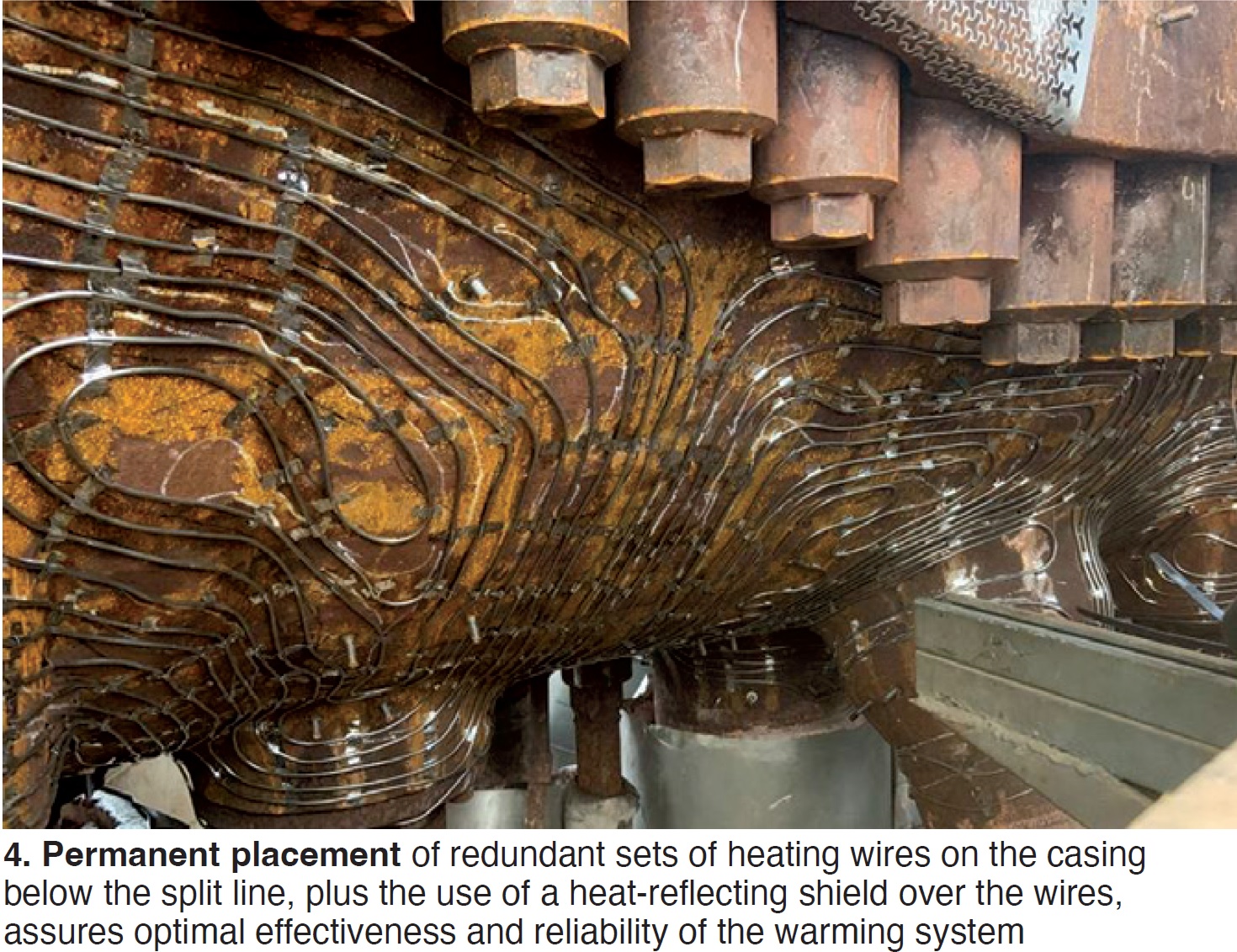 Warming and insulation systems can be installed in 50 days (standard) or less (expedited) and can be operational within the confines of a steam-turbine major without impact to the typical outage schedule—given parallel activity integration into the mechanical outage work scope. The insulation is guaranteed for up to 15 remove/replace cycles with the only requirement being that an Arnold technical advisor is onsite to support that activity and ensure the quality of installation meets Arnold’s strict standards.

Gagnon worked with the editors to integrate text with video, enabling a more efficient way to provide information of value to decision-makers. The first, and longest, of the five videos recorded, “Warming-system familiarization,” provides a peek “under the hood” in less than eight minutes, enabling you to see the various system components and to understand their purpose. Access the videos below.

Next thing you’re probably interested in is “Integrating the turbine warming system into plant operations” to take maximum advantage of the information created. This runs less than two minutes.

What’s the cost? If the introductory material provided above and in the accompanying videos piques your interest perhaps a preliminary cost estimate would be of value to the people in your organization responsible for capital budgets. Some of the information required to get started is the following:

As a rough cost/payback estimate shared by Arnold for warming and insulation systems, on a 527-MW, 2 × 1, 7F.04-powered combined cycle operating on $9/million-Btu gas with a current market power price of $53/MWh, it would payback possibly in as few as 75 warm/cold starts—or less than a year if you have contracts/conditions demanding operational flexibility.

The fourth video, “Information required to design and estimate the cost of a warming system for your steam turbine,” might assist in this effort.

First-hand installation and operational knowledge of the Arnold steam-turbine warming and insulation systems was shared with the editors by the top managers of a nominal 400-MW, 1 × 1 combined cycle across a table in the plant’s break room. This axial-flow unit began commercial operation 20 years ago without a warming system.

But it took eight hours to start the unit, and temperature differences between the rotor and casing on starts caused an unacceptable number of trips. The presumed solution, a heating system for the HP section of the turbine, was installed in 2004. It could heat that casing to about 550F and reduced the cold-start time to about five and a half hours.

The plant was on the right track. However, the system installed was marginal operationally. For example, it could not manage casing temperatures as required. Plus, it was either on or off; blankets could not be controlled individually. The blankets also were not sufficiently robust to withstand the wear and tear of plant service and ground faults occurred too frequently as they aged.

About the time the pandemic revved up, an L-0 blade failure knocked out the entire steam turbine/generator train. OEM Siemens suggested that the plant install Arnold warming and insulation systems during the outage.

The advice was good, because clearances in the rebuilt turbine were much tighter than in the original machine and Arnold’s eight-zone heating system allows independent control of temperature in each section (see last video attached, “Steam-turbine-warming case history”).

However, the tighter clearances contributed initially to high vibrations on hot starts and roll-ups at around 1500 to 2000 rpm. The gremlin was high differential temperature between the upper and lower casings. The innovative and cost-effective fix: Turn on heating blankets earlier (bottom first), as soon as the unit is put on turning gear, to maintain the optimal ΔT during the cooldown period prior to temperature hold for warming, and to maintain these negotiations of ΔT, differential expansion, and casing average temperature until the next start.

Precise temperature matching eliminated the vibrations, allowing the turbine to perform as designers intended. Reliable operation with no rubbing means less maintenance over time. Bugs eliminated, the system works problem-free, the plant management team said. “Just turn it on and forget it.” There are no PMs.

Little training was required. The Arnold system has its own control system that interfaces with (not integrated with) the plant’s T3000 system, as Gagnon mentioned in the videos. To be sure all plant personnel had access to the required level of operational knowledge, Arnold provided some easily accessible instructional videos and circulated them among staff—in-person training during the height of the pandemic being a challenge.

Today a cold-turbine start can be completed within four and a half hours, nearly half the time as starting without a warming system in place and with no trips and restarts, which are detrimental to a steam turbine’s maintenance frequency. An appropriate question: What can be done to further reduce the combined-cycle startup time? In this case, and at this time, Arnold is working with others to introduce its proven heating technology into other high-stress areas, such as the HRSG drums and harps.