The CTOTF V-Class Roundtable, chaired by Olaf Barth of Dominion Energy, is the only annual forum for owner/operators of Siemens V machines in North America known to the editors that encourages non-OEM presentations. Because the V84.2 (SGT6-2000E) and V84.3A (SGT6-4000F) fleets in the US are relatively small—numbering about six-dozen and three-dozen engines, respectively—there are no “big” third-party names associated with overhaul services and turbine parts for these machines.

That makes tiny Eta Technologies LLC and its alliance partners major players in the shallow pool.

Rich Curtis and John Kearney, who founded Eta Tech early in 2005, were invited by Barth to present at the 39th Annual Fall Turbine Users Conference, Sept 7-11, 2014, at the Rancho Bernardo Inn, San Diego, focusing on the following:

The following V gas-turbine thumbnails were extracted from the PowerPoint accessible to users in the CTOTF Presentations Library:

During a scheduled outage, plant personnel reported finding broken and cracked pilot-gas tubes in their V84.2 burners. Follow the seven photos in Fig 1 to get a better understanding of the problem. 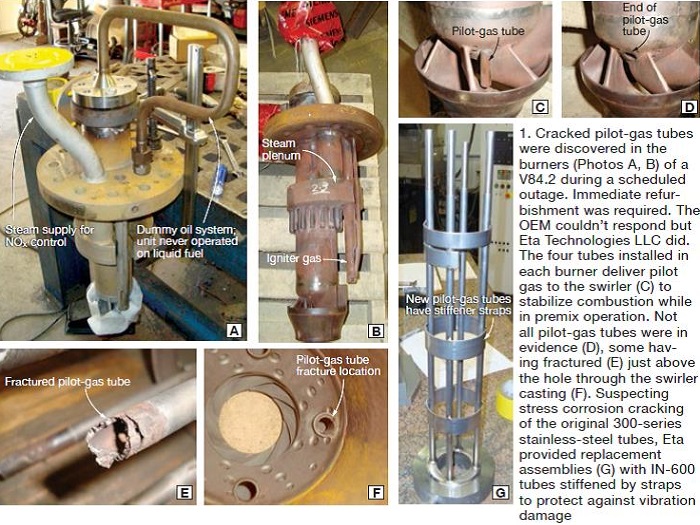 The owner’s metallurgists suspected stress corrosion cracking of the 300-series stainless-steel tubes was the underlying cause of the failures and selected Inconel-600 as the replacement material. Perhaps the biggest challenge was completing the rehab project in less than two weeks to avoid an outage extension. The plant had no spare burners, so replacement pilot-gas tubes were the only viable option. Eta completed repairs, installation, and final inspection in 12 days.

The burners exhibited other damage as well—such as severe oxidation of carbon-steel oil-burner flanges, which were weld-repaired and finished-machined as part of the project. Also of interest to engine owners at the CTOTF meeting was that the thermocouples provided by the OEM are not replaceable without disassembly. Eta Tech now offers a replaceable T/C mod. 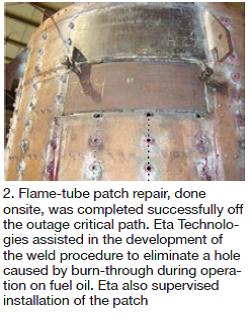 A hole was burned through a combustion flame tube when burning oil (Fig 2). Eta Tech supplied and rolled patch material; then assisted in weld-procedure development and supervised patch installation onsite within the outage window.

The inner casing on a V84.2 is a large fabricated assembly which takes the hot gases from the two combustion chambers and turns it into the first-stage turbine vanes (Fig 3). Curtis said the casing is fabricated from Inconel-617 plate and has steel radiation liners to direct and control cooling air flow over it. It and other hot-gas-path components suffer in-service deterioration—including distortion, oxidation, cracking, fretting wear at fixation/interface points, and rusting of steel parts.

The health of HGP components can be maintained by regularly monitoring the wear and tear on coatings and hard-facing and repairing damage identified. Curtis, a gas-turbine materials and coatings expert, showed roundtable attendees where they should pay attention using Fig 3A. He pointed to the burner bezel rings and combustor dome plates and offered advice on thermal barrier coatings (TBC) and chromium-carbide hard-facing materials best suited for those areas.

Following the gas path, he suggested application of TBC in areas of the mixing chambers prone to thermal stress. For the inner casing, he suggested a full coating of TBC. At the intersection of mixing-chamber transition rings and the inner-casing inlets, he recommended chromium-carbide hard-facing.

Curtis showed several photos TBC and hard-facing applied on critical components and provided one picture looking up into the combustor dome to illustrate a quality job (Fig 3B). Access the PowerPoint in the CTOTF Presentation Library to view wear areas on specific components and the work done to mitigate that damage.

Curtis next discussed a couple of repair capabilities recently developed by Eta Tech, described here and in the last case history. He seemed particularly proud of the V84.2 gas-distributor repair procedure, which included the “S” bend replacement. This is not something the OEM is willing to do, attendees were told; Siemens wants you to buy a new distributor set-up.

Looking at the images in Fig 4, note that in Fig 4A the original premix gas distributors, fabricated from 16Mo carbon steel, deteriorate unchecked over time. Curtis told the users that he has seen “S” tubes lose up to 40% of their wall thickness, much like boiler tubes subjected to FAC attack. Eta Tech engineers developed a fixture (Fig 4B) to replace S-bend pipes, which are now made of P11 material with increased wall thickness.

The weld process has been qualified with sample cut-ups and hardness traverses as-welded and after stress relief. Welds made in the refurbishment of gas distributors are stress-relieved, x-rayed, and liquid-penetrant inspected. Dimensional accuracy is assured by the fixture. Finally, a corrosion-resistant coating is applied (Fig 4C).

The combustion section of the V84.3A differs significantly from that for the V84.2. It features an annular combustor arrangement of 24 burners. The hub casing has six rows of rectangular metal tiles; the outer shell five rows. The tiles are subject to temperature extremes, with exposed surfaces seeing the worst damage. Typical wear and tear is edge cracking and erosion; bolt holes often suffer thermal erosion.

Typical repair sequence for tiles is coating removal and inspection, dimensional check using a fixture, repairs where necessary, and recoating with TBC. Regarding the last, coating coverage includes all side surfaces as well as inside the bolt hole.

Tile bolts, made of Inconel-939 with cast-in cooling holes, often exhibit service cracks emanating from a sharp radius on the torqueing feature. Plus, bolt heads are prone to oxidation/thermal erosion. Eta Tech modified bolt design to eliminate these shortcomings. Its bolt heads have more generous radii as well as an MCrAlY overlay coating.

Airfoil repairs; new blades and vanes. Curtis concluded with details of Eta Tech’s (1) refurbishment techniques for segmented seals and turbine vanes and blades, (2) its special rotor tooling for the V84.2, and (3) its prototype first- and second-stage blade and vanes which are expected in commercial production by the middle of 2015. CCJ