Intercooling key to the commercial success of gas turbines

Most people begin their professional careers with little or no historical perspective about the industry they serve. They may absorb some history over time if they’re interested in how things got to be the way they are and if they have a knowledgeable and sharing mentor. But more often than not, the clock starts with their first paycheck. This is unfortunate, because failure to learn yesterday’s lessons means you are not inoculated against re-making past mistakes.

This point was driven home a couple of times during the recently completed seven-lesson webinar “Generator Monitoring, Inspection, Maintenance,” conducted by Clyde Maughan, one of the world’s leading experts in generator forensic engineering (access www.ccj-online.com/maughan). At 85, and with 62 years of generator lessons learned behind him, one reason Maughan doggedly pursues his career is to help today’s engineers avoid having to solve problems already solved.

Ageing professionals are prone to wince when they hear factually incorrect statements from those who should know better. CCJ editors are very aware of this. Recently a call came in from Sep van der Linden, president Brulin Associates LLC, Chesterfield, Va, who has more than 50 years of experience in gas turbine technical matters—and counting.

He was disappointed with a statement in a promotional brochure featuring the keynote speakers for the upcoming ASME Turbo Expo 2012 (June 11-15, Copenhagen) that said GE’s LMS100 was “the world’s first intercooled industrial gas turbine.” Van der Linden said, “Not true! The first intercooled industrial gas turbines (IGTs) date back to the 1940s.” In fact, he continued, the world’s first 100-MW generating station powered by gas turbines had four nominal 25-MW intercooled machines. It went into service in September 1959 and “I was in Port Mann, Vancouver, BC, for the plant opening.”

Van der Linden’s point is important. His own career spans almost the entire timeline of industrial gas turbines, and when you add in first-hand information obtained from mentors, there isn’t much about land-based engines for electric generation that he hasn’t been exposed to. But even van der Linden is going to retire someday. Now is the time to gather up the knowledge the pre-1965 engineers have to share, lest the mistakes of yesterday become the mistakes of tomorrow.

The Brown Boveri Corp (now Alstom) intercooled gas turbines at the remotely operated and controlled Port Mann Station, built by British Columbia Electric Co (today BC Hydro), were two-shaft machines arranged as shown in Fig 1. All four units were installed in-line in a building measuring 460 ft long x 82 ft wide x 59 ft high (Fig 2). This and the other photos shown here were scanned from print materials; neither the utility nor the OEM were able to locate the original images.

The gas turbines, which were capable of full-power operation 20 minutes after ignition, burned natural gas in summer and crude oil in winter in their single-burner HP and LP silo combustors (along the left hand wall in Fig 2). The generators/synchronous condensers were water-cooled. Air flow through the engines was 321 lb/sec, pressure ratio was 18:1, and efficiency 25%. Turbine inlet temperature was 1200F.

The LMS100 mentioned earlier, produces 100 MW in a single unit with an air flow of 460 lb/sec and pressure ratio of 42:1, illustrating how far gas-turbine technology has progressed during van der Linden’s career. Rated output of the LMS 100 can be achieved in half the time the Port Mann turbines were capable of. More detail on the new engine can be found in the Western Turbine report elsewhere in this issue. 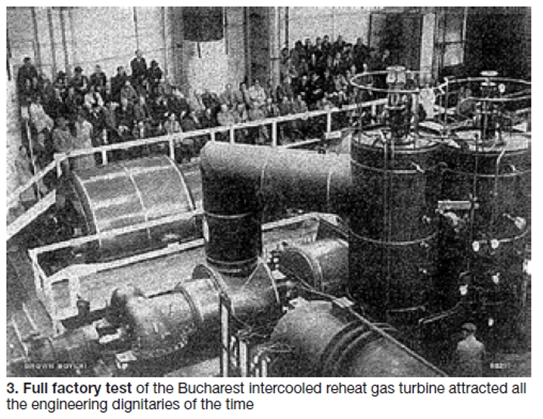 Van der Linden then continued the history lesson. Intercooled IGTs were developed for a time when fuel was scarce and heavy oil or steel-mill gases had to be used and high efficiency was important. The first commercial unit was completed in 1946 and factory-tested to full capacity (Fig 3).

However, post-war issues delayed the commissioning of that machine in Bucharest, Romania, until 1951. It was a two-shaft reheat, intercooled gas turbine rated 10 MW that achieved 12 MW with about half the air flow of the first commercial IGT commissioned only 12 years earlier.

Recall that the first industrial gas turbine, rated 4 MW and having an efficiency of 17%, was installed in a bomb shelter in Neuchatel, Switzerland, just before the start of WWII. For details, see the paper prepared by van der Linden when GT Neuchatel was designated a Historic Landmark (http://files.asme.org/asmeorg/Communities/History/Landmarks/12281.pdf).

The Romanian unit demonstrated the rapid development of gas-turbine technology, even with hot-gas-path materials limited to 1112F and turbine inlet temperatures of 1070F (less than the exhaust temperatures of some modern machines). Pressure ratios were low compared to those achievable today, but the intercooled turbines had higher efficiencies than some modern engines with cooled turbine stages.

The Romanian success story was soon followed by a 40-MW powerplant in Beznau, Switzerland, with one 13-MW and one 27-MW engine operating on crude oil and optimized to achieve smokeless combustion. The engines in this plant, the world’s largest generating station incorporating gas turbines, featured recuperators and sequential combustion, in addition to intercooling.

Port Mann was the next step forward. Having units controlled from corporate headquarters was important for a utility trying to reduce head count because of salaries viewed by management as high. Here’s how this was achieved in an era of electrohydraulic controls and mechanical relays:

Lessons learned on this project contributed significantly to the continued development of gas-turbine technology for power generation. They included the following:

Van der Linden recalled that the plant ran successfully until 1974 when high fuel prices made it uneconomic. It was replaced by Korneuburg B, a 125-MW 1 x 1 combined cycle, powered by a single-shaft, 81-MW gas turbine. This plant was the most efficient powerplant ever commissioned when it went into service in 1981. “The race was on,” van der Linden said, “for improved cycle efficiency with ever-increasing turbine inlet temperatures, pressure ratios, and GT sizes.”

Acknowledgement. Historical sources include published papers and various editions of the Brown Boveri Review in addition to personal communication with Dietrich Eckhardt. To dig deeper, see ASME’s Journal of Engineering for Gas Turbines and Power, July 2002.