Challenge. Since 2008, perhaps earlier, Crete had been experiencing generator circuit-breaker trips and grid separation because of PT (potential transformer) fuse failures. Between 2008 and 2009, Unit 1 suffered eight PT fuse-failure events (nine total among the plant’s four 7EA peakers) resulting in 9.95 hours of forced-outage time and lost generation. Plant personnel noted during the investigation of, and recovery from, these events that the PT fuses were migrating out of their clips, and interrupting the circuit (Fig 1).

In October 2009, a third-party contractor was hired to measure vibration on the Unit 1 generator, higher-than-normal readings having been observed on the exciter end of the machine. The contractor found that the second balance resonance vibration was high and vibration energy was being transmitted to the casing and extremities of the generator. The issue was resolved, so staff believed, by using a dynamic weight correction to the generator field (two planes). No PT fuse failures occurred in 2010.

In 2011 and 2012 the PT fuse-failure trips returned, with Units 2 and 4 having three failures contributing 1.74 hours of forced-outage (FOH) time. Site technicians attempted to zip-tie the fuses into the clips, given migration was noted on multiple fuses at the time of failure (Fig 2). This proved ineffective: Fuse migration was still observed during the 2012 fall outage.

Site personnel fabricated a new style of fuse clip with a latching bale mechanism and upgraded the fuses from 15 kV-0.5E amp to a more robust 15.5 kV-1E amp fuse with a protruding lip on the ferrule to prevent axial movement (Fig 3).

At this point the failures were so common that staff had developed a recovery procedure using the MCB terminal blocks in the generator compartment and moving the failed fuse lead over to the second PT terminal of the affected phase to limit forced-outage time. Resistance was measured on all fuses during the spring and fall outages to see if fuse degradation could be tracked; fuses were proactively replaced. Only one failure was noted in 2013 on Unit 4 (1.27 FOH).

In 2014 three PT fuses failed—one on Unit 1 (0.35 FOH) and two on Unit 2 (1.42 FOH). A contractor was brought onsite in summer 2014 and the generator exciter end was balanced on Units 2, 3, and 4, where high seismic vibrations were identified during gas-turbine operation. After balancing, no fuse failures were noted for the remainder of 2014 or 2015.

In 2016 the fuse failures returned, this time exclusively on Unit 1. Over the course of a month, five more fuse failures occurred, resulting 4.49 FOH and significant lost revenue. Staff contracted a generator specialty group to collect flux-probe and vibration data during unit operation at varying real and reactive power conditions. A four-day maintenance outage was taken to disassemble both ends of the generator and perform visual inspections for possible dislodged rotor blocking or other mechanical issues.

Multiple test runs were performed with varying balance shots until vibration was reduced. Data were collected for the remainder of the summer peak season and sent for third-party review.

There were no recurrences of PT fuse failures in 2016. The same vendor returned in March 2017 and performed a borescope inspection of the Unit 1 generator rotor. No issues were identified.

Two months later, Unit 1 experienced a PT fuse-failure event: Two of the six PT fuses failed while the unit was at base load, resulting in 4.4 FOH. Unit vibrations were low during this event and, having exhausted balancing and mechanical inspection efforts on the generator itself, staff shifted its focus to the line-side cabinet where the PTs were mounted.

An engineering firm conducted impact/resonance tests on the fuses, fuse clips, PTs, and cubicle. Transfer functions from the impact-response data were computed to determine the response as a function of frequency. Based on data taken during the resonance testing, three fuses had natural frequencies that were in close enough proximity to 60 Hz as to amplify their response to any generator vibration that might be present. A recommendation to install vibration dampening material under the PTs was implemented on Units 1 and 2.

Unit 3 experienced another fuse failure during the summer peak period. During the fall outage, plant personnel found the fuse resistances on all four units still shifted from 61 ohms new to 25 to 30 ohms at the time of inspection, with no difference noted in the units with dampening material installed. This was indicative of imminent failure based on prior experience; management determined a drastic change of approach was required.

Solution. In fall 2017, staff and a contractor worked on a plan to physically relocate the PTs from the line-side cubicle to another compartment where vibration would not be an issue. After considering multiple locations, the parties determined that the back side of the PACS generator circuit-breaker package would be an ideal location.

The vendor’s engineering and design department calculated there would be enough room to move the PTs to the new cubicle and maintain electrical clearances from phase-to-phase and phase-to-ground. The project was approved by the owner and the full scope for Units 1 and 2 was planned for the outage in spring 2018. The relocation process began in April and was completed in nine days.

Next, primary injection testing was performed using the system back-feed as the source, with the GCBs closed and the generators for Units 1 and 2 completely isolated by removing a section of the non-seg bus between the GCB and the generator terminals. All voltages had the proper amplitude and phase angle at both the primary and secondary generator protective relays and controls system.

Results. In summer 2018, Units 1 and 2 had 125 combined starts with no PT fuse failures. Unit 3 experienced three PT fuse failures during the same period, re-enforcing the thought that the PT relocation had permanently resolved the issue. Plant management budgeted for and completed this project on Units 3 and 4 in spring 2019. Prior to relocating the PTs, there had been a total of 26 fuse-failure events totaling 25.09 FOH. In a total of 325 starts since project implementation, there have been no PT fuse failures.

Challenge. Crete battled issues with its instrument-air system and pneumatically actuated equipment for several years. Each of the plant’s 7EAs was supplied with an air compressor and dryer capable of producing only about 8 scfm of instrument-quality air. In addition to inadequate output, dryer operation was unreliable.

Performance issues also were identified with the inlet-bleed-heat (IBH) valve and the 11th– stage compressor bleed valves during cold weather. On multiple occasions the IBH air regulator (located on the turbine-compartment roof) malfunctioned because of moisture accumulation and its subsequent freeze-up on the diaphragm. This caused multiple runbacks and lost production.

The compressor bleed valves had caused several gas-turbine trips on shutdown. The trips were attributed to slower-than-expected operation of the valves, or a complete failure to actuate, because the porestone filter under the inlet section accumulated moisture which froze and restricted air flow to the actuators.

Solution. Staff determined multiple phases of improvement were required to adequately address the issues with pneumatic systems. In order to resolve cold-weather reliability issues, the IBH regulator was relocated into the accessory compartment. Necessary tubing modifications also were made—including vendor-provided heat tracing and insulation of the instrument-air tubing downstream of the regulator on the turbine-compartment roof.

The 11th-stage compressor bleed valve air-supply issue was resolved by piping instrument air to the solenoid-valve supply and removing the compressor discharge air and porestone filter from the system—thereby reducing the risk of freeze issues.

To complete the project and ensure an adequate supply of instrument air, four larger compressors and dryers were installed. The new, so-called AirCenter has more than three times the capacity of the original equipment (Fig 4) and is equipped with an internal PLC, which is linked to the Mark V control system to provide alarm status. 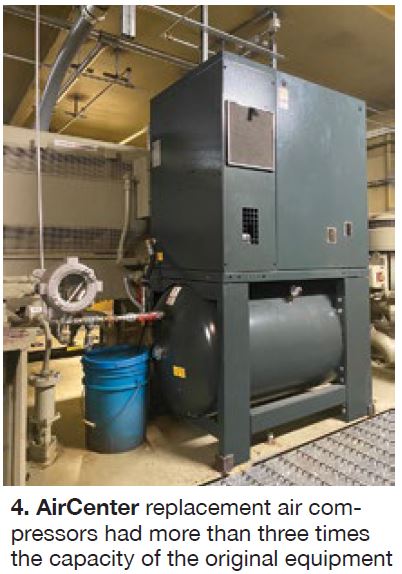 Plant personnel then repurposed the old air compressors and dryers as a backup system which starts automatically when system pressure drops below a setpoint. All cable pulls, terminations, and tubing modifications were performed by plant personnel to minimize cost.

Results. Since project completion, the site has not experienced bleed-valve actuation issues, purge-valve failure-to-close runback events, and/or IBH air-supply issues over the course of 558 starts. On the two occasions where the new AirCenter malfunctioned, the backup compressed-air system took over and provided an adequate supply of air to operate all necessary pneumatic equipment reliably.

The man-hour commitment required to maintain a functioning instrument-air system has been reduced significantly because of the AirCenter’s high reliability. Staff continues to monitor and actuate air-operated devices at a greater frequency during cold weather to ensure proper operation.

Challenge. Crete consumes from about 500,000 to 900,000 gal/yr of demineralized water for power augmentation (fogging) and compressor water washes. City water is demineralized onsite to 0.5 µS by a trailer-mounted system and stored in a 150,000-gal stainless-steel tank.

However, the tank was not insulated, requiring that it be drained before winter for freeze protection. Water remaining was considered “process water” and because Crete does not have a discharge permit it cannot be dumped to ground or a stormwater sewer. Disposal cost the plant was between $10,000 and $20,000 annually, plus an additional $10,000 in the spring to replenish the demin water supply.

Solution. Staff and a contractor developed a plan to insulate the storage tank with 2-in.-thick polyisocyanurate foam protected by an outer metal shell (Fig 5) and to install two 7.5-kW direct immersion heaters to maintain the desired water temperature.

Another vendor provided heat tracing and insulation on system piping and instrumentation outside the tank. Plant personnel pulled cable for the heater power feed from a spare 480-Vac bucket in the Unit 1 electrical control compartment and replaced the previously installed junction boxes and cable trays to accommodate the heater elements and heat tracing. The entire project was completed for $100,000.

Results. This project allows Crete to hold demin water in the tank year- round. During the two winters since project completion, 167,000 gal of process water that would have required offsite disposal was retained in the insulated tank, saving nearly $60,000.