Use new technologies to assess condition of hard-to-access components 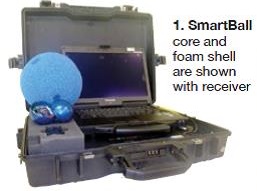 Challenge. In 2013, Granite Ridge Energy (GRE) undertook an initiative to identify, prioritize, and assess plant systems and components that typically do not get reviewed on a routine basis.

Solution. GRE personnel decided they had to understand the risks and gain a long-term planning perspective on systems and components not readily accessible during standard outage iterations—including the 16-in.-diam ductile-iron line that supplies city water for cooling-tower makeup, the 84-in.-diam underground circulating-water line, and the inside surfaces of the facility’s large water storage tanks. None of these had been accessed since commissioning in 2003. GRE worked with several vendors to utilize new technologies to perform these assessments.

The plant elected to use “SmartBall” technology, developed by Canada’s Pure Technologies Ltd, to evaluate the condition of the 3.5-mile cooling-tower makeup line. By working with the vendor to set up 10 transceivers along the run, and maintaining water flow at a constant velocity, personnel were able to launch a small acoustic device (Fig 1) at the city pumping station and retrieve it at GRE’s water clarification and filtration system about six and a half hours later. The software readout in Fig 2 shows several gas pockets in the line at elevation changes, but no indication of a leak. 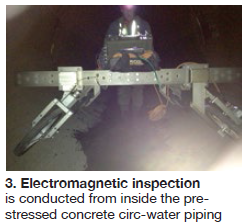 GRE used the same vendor to perform an electromagnetic inspection of the pre-stressed concrete cylinder pipe portions of its 700-ft-long circulating-water line. This technology works by inducing a varying electrical field on the pre-stressing wires and measuring the corresponding magnetic field response (Fig 3). The data then can be analyzed for wire break damage and its severity. Forty piping segments were analyzed. There were no indications of wire breaks.

Robotic, pulsed-eddy-current (PEC), and magnetic-flux inspections were performed on the water storage tanks. The first two, conducted by Mistras Group Inc, were done prior to the outage and while online to determine the general condition of the 500,000-gal demin tank and the 800,000-gal cooling-tower makeup tank. The PEC method can determine carbon-steel wall thickness without having to remove tank insulation.

The inspections showed that the demin water tank was in excellent condition with wall thickness and its epoxy liner totally intact. However, the cooling-tower makeup tank showed signs of liner failure with active corrosion, although PEC data indicated wall thickness within the acceptable range. 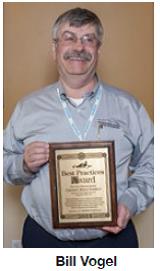 he test results enabled GRE to budget and properly plan for a single tank drain and repair performed by Structural Group Inc versus having to drain both tanks and react to the findings while in full outage efforts. After the makeup tank was drained, magnetic-flux leakage testing technology confirmed there was no active corrosion under the tank floor. GRE then began its planned repair efforts and is planning future inspections of this nature.

Results. Through the use of technologies not commonly employed during routine outage activities, GRE has been able to catalog and establish baseline conditions for its critical components to enable better long-term planning and targeting of upcoming outage activities. The bottom line is a cost saving over trying to gain this information through more standard efforts.