Air-cooled generators are offered today with a rated output of 400 MW and moving higher with voltages at 18 and 19 kV. As with the hydrogen-cooled units that were pushed to the limit in the 1970s and 1980s, the larger air-cooled machines have begun to show their own set of unique problems.

Despite initial expectations of high reliability and low maintenance, the low-cost, somewhat simpler designed, air-cooled generator put into service in the last 10-15 years has been receiving a lot of attention lately to prevent in-service failures.

Much of this attention is in the form of maintenance activities, focused on prevention of two primary stator winding deterioration mechanisms: spark erosion (SE) and partial discharge (PD). The latter is a relatively slow-acting failure mechanism, often taking many years for failure to occur. By contrast, SE, also referred to as vibration sparking (VS), has been known to cause a stator winding failure in as little as six years from initial commercialization.

The increased maintenance effort includes everything from unanticipated borescope inspections, resin injection outages, stator rewedging, monitoring, testing, and premature stator rewinds, all driven by SE and PD. Details of each deterioration mechanism are presented below.Stator bars that are loose in the stator core are susceptible to SE. Low surface resistivity of the bars’ semi-conductive coating can be a secondary contributor. Depending on the type of side packing system originally installed in these machines, the bars can become loose in the slot over time. If the side packing system fails to keep the bars tight in the slot, gaps can open up between the bars and the core iron.

During normal operation, the stator is subjected to steady-state slot pounding forces. If gaps in the slot exist, bars can vibrate, causing repeated opening and closing of the gaps between the bar and the core. Depending upon the length between contact points from the stator-bar surface to the core iron, high levels of current discharge (erosion/sparking) can occur because of circulating currents between the bar’s semi-conductive surface and the core iron (Fig 1).

SE damage to the stator-bar groundwall insulation occurs relatively quickly. One well- documented failure in the US occurred after only 33,000 service hours. Deterioration of the insulation resulting from repeated arc strikes is clearly visible (Fig 2) with the strikes first eroding through the semi-conductive layers, then through the mica tape, and eventually to the copper conductor, causing a ground fault.

A correlation, based on over 40 generator inspections, exists between service hours and SE deterioration on large air-cooled generators. In Fig 3, a deterioration level of “0” indicates no SE damage. Level 4 represents failure or a rewind. The data suggest that generators suffering from SE aren’t lasting more than 60,000 service hours.

Many of the units suffering from spark erosion have been in service less than 15 years. In some cases, the generator rotor has never been removed for a thorough inspection. However, an inspection to determine the condition of the stator winding with the rotor in place is possible using a borescope through the vent duct openings in the back of stator (Fig 4). 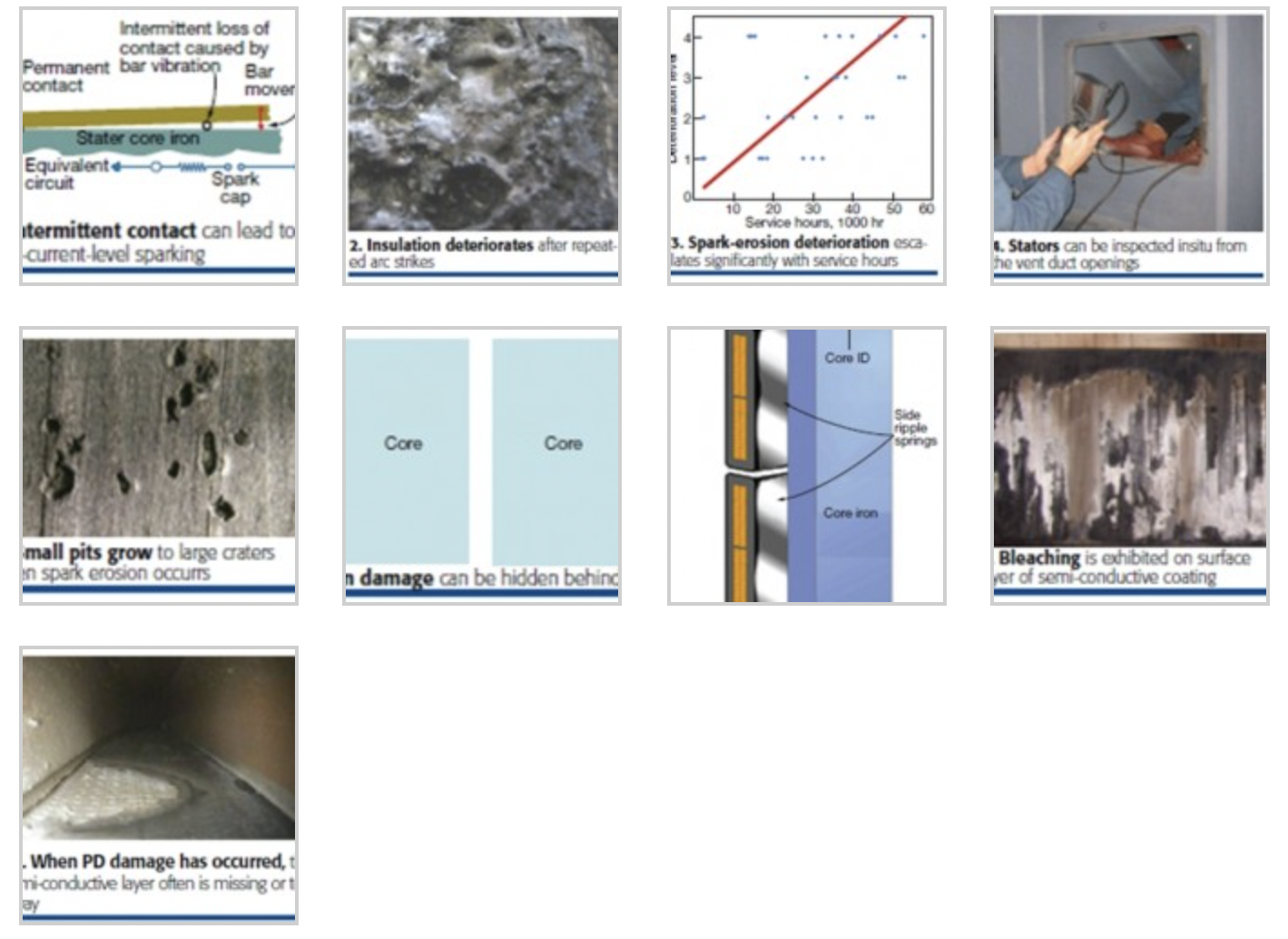 SE damage can be found on any coil of any voltage, because SE depends primarily on the looseness of the stator bar in the slot, and to a lesser extent, the surface resistivity of the semi-conductive coating. On machines with stator windings removed in preparation for a rewind, typically the top bars show more damage than bottom bars. Increased damage is also found on the bar surface towards the ends of the stator core because of the tendency for the stator bars to be not as tight at the core ends.

SE occurs between the core iron and the coil surface. Borescope inspections down the open vent duct in the core may not reveal the earliest stages of damage (Figs 6, 7). Only a small narrow section, along the side of the top and bottom coils, will be visible for inspection. However, as the condition progresses, the damage area increases on the coil surfaces visible through the vent duct opening. Even though damage can be hidden by the core, inspection of multiple coils in many vent ducts can provide valuable clues about the condition of the stator winding.

What to do now

Intermediate repair options for SE, such as resin injection into the slot, are limited and carry risks. A careful evaluation of the level of damage is necessary. Windings with significant damage should be replaced—a rewind with an improved design being the most reliable and permanent fix.

As part of a rewind, the use of semi-conductive side ripple springs (Fig 8.) is recommended. They allow the bar to be fitted tight against the core iron, down the entire length of the slot, unlike the flat side packing materials. The spring action loading of the ripple design maintains a constant force pushing the bar tight against the core, keeping the bars tight in the slot.

Tight bars in the core iron reduce the problem of low surface resistivity of the semi-conductive discharge mitigation system. Even if surface resistivity decreases with age, a tight bar will remain properly grounded. Inspections confirm that even with lower values of surface resistivity, spark erosion damage was less evident on the bottom bars, which tend to be wedged more tightly in the slots.

Air-cooled generators of this class can also suffer from stator-winding insulation deterioration caused by PD. The surface layers of the semi-conductive coating in the slot and the initial layers of the ground insulation system can be affected. Extensive bleaching (Fig 9) on large portions of the stator bar typically is observed.

On some affected machines, PD activity in the slots can be so severe that the flat semi-conductive side packing system disintegrates. Proper side packing is critical for preventing these problems. Inspection for PD deterioration in the slot is also possible on units with vent ducts that can be accessed from the core outer diameter. The appearance of the PD damage in the vent duct typically is round in appearance in the early stage of deterioration. Often the outer semi-conductive layer is missing or torn away to the extent that woven glass material is clearly visible (Fig 10).

Installation of PD monitoring equipment and ozone level detectors are recommended to monitor deterioration rate. Electromagnetic interference (EMI) testing may also detect SE during operation, as well as PD. Use of PD and EMI monitoring, borescope inspections, and regular electrical testing, all help with implementing a planned rewind, rather than a rewind done on an emergency basis. ccj