With just a few excellent slides and a tag team of a design specialist and a construction specialist, Greg Rueff, Vogt Power International, and Tim Holland, TEiC (a Babcock Power company), showed attendees at the first installment of the HRSG Forum’s Supplier Workshop Series that sometimes you have to “redesign and replace” to relieve your pain points, rather than keep taking painkillers. 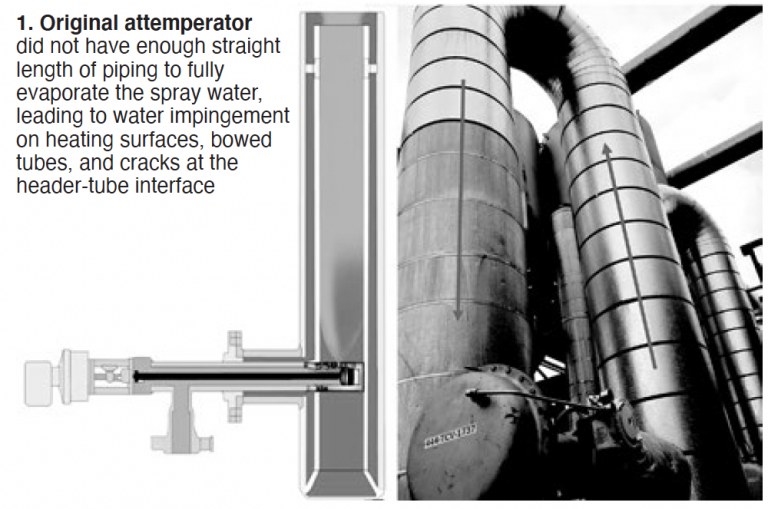 “The OEM clearly tried to skimp on piping cost and routing” for the attemperator in the first case study, said

Rueff. There was insufficient straight length of pipe in the original (Fig 1), triple-wide candy-cane design (each with a discrete attemperator) for the water to completely atomize. How insufficient? “So much that the new loop had to be dropped down the side of the unit,” he said. Simply replacing the attemperator with an improved version would not have solved the root cause of the problem.

Today there’s a single attemperator loop of larger pipe size (Fig 2), and lower bulk average velocities, with one ring-style attemperator/external control valve to maintain reheat steam temperature. Although it handles three times the amount of steam as the original system, there’s only one attemperator to maintain.

Holland added that the spray-water line now runs from the ground. “The length of pipe was crucial to the engineering design,” he said. “By pre-installing many of the piping supports while the units were running and limiting the number of field welds, we were able to fit this replacement in the outage window,” Holland added. He called the project execution “flawless.”

Responding to audience questions, Rueff noted that the new attemperator still employs a liner but it is “not quite as long as the original.” He recommended that units like this be borescope-inspected and maintained at least annually, especially if the HRSG is being cycled. However, you may be able to back off on the frequency depending how aggressive the cycling is and on what the components, especially the spray nozzles, look like.

In the second case study, a site was experiencing persistent degradation and disrepair of its LP evaporator and economizer HRSG sections, which had been in service for around 17 years. Leaks resulted from flow-accelerated corrosion (FAC) and exterior corrosion. All of this tubing was carbon steel. “Although FAC weakened the tubes, the flawed support system design led to the mechanical failure,” stated Rueff. Plus, tube spacing did not allow for ease of cleaning, and since 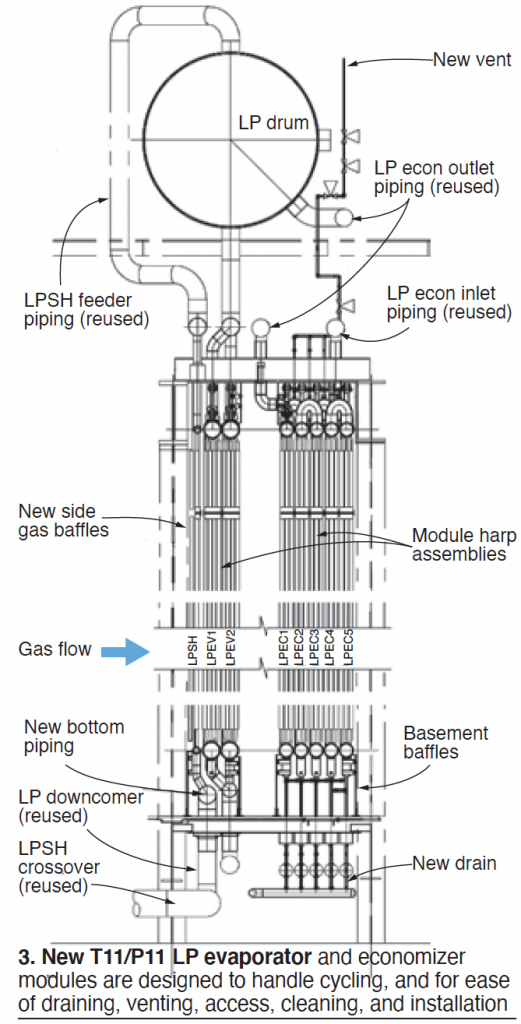 everything was tied together, it was difficult (if not impossible) to replace any single tube.

The replacement (Fig 3) uses T11/P11 materials, is fully ventable and drainable, includes staggered tube pitch for ice-blasting cleaning lances to pass through all tube banks, and has an access lane between the evaporator and economizer sections large enough to scaffold-up in. Independent supports accommodate thermal growth of each module. Best of all, it performs equal to the original so no unit re-rating was necessary.

The field work was performed in a 30-day breaker-to-breaker outage. To save valuable schedule time, the customer witnessed a shop hydrotest, rather than having it done in the field. With the use of a discrete header design, harps could be lifted and loaded individually. Catalyst changeout was conducted during the same outage.

For both case studies, Rueff and Holland stressed that Vogt and TEiC were awarded the jobs on a turnkey basis, which allowed them to coordinate internally to optimize routing and fabrication, and other factors. In the LP system case, the two firms were able to employ a proprietary engineering and lifting plan which allowed the use of a smaller crane and special unloading and uploading frames (proprietary to Vogt) to avoid distorting the tube harps while they were being lifted into place and permanently affixed to the unit—without lifting the drum.

In a moment of levity, Rueff ballyhooed just-in-time delivery as great in theory but not accounting for the realities of trucking.

During the Q&A, Holland and Rueff cautioned that these retrofits must be planned over a 35-40-week timeframe. “It’s rare,” they said, “that any vendor will have stock tubing to replace a harp: You’re at the mercy of the mills.” Dr Barry Dooley of Structural Integrity Associates, a Forum host, noted that it is extremely rare for a plant to conduct an inspection specifically for FAC. The failure usually comes first. He also noted that tube materials containing chromium at levels as low as 0.1% can help prevent FAC. CCJ