Partial discharge is a breakdown phenomenon associated with electrical insulation having weak spots or flaws. While most of the insulation, in a generator for example, can withstand the electric forces experienced, electrical discharges occur in flawed areas, partially bridging the distance between conductors. This only happens when the electric field strength exceeds the breakdown strength of a portion of the insulating material—usually because of localized deterioration.

But, imagine there is a flaw, such as a small air bubble, in the insulation and it has a significantly lower dielectric strength than the insulation (Fig 1). The top of the air bubble is at a higher potential than the bottom. If the voltage difference is great enough, arcing will occur inside the bubble. This is partial discharge, because only part of the voltage potential is discharged.

Damage caused by PD. When the arc jumps through the void, it creates high-frequency, transient currents that last for a very short time (nanoseconds to microseconds). PD produces light, heat, sound, high-frequency waves, and chemical reactions that can lead to the formation of ozone and other gasses. Over time, partial discharge will cause insulation to degrade. Conductive channels will form in the insulation, resulting in more and more severe PD. “Treeing,” the formation of conductive paths that look like trees with many branches, is the visible result of the damage (Fig 2).

PDIV and PDEV. The voltage level needed to initiate PD is the partial discharge inception voltage (PDIV). Generally, PD does not occur continuously, only when the PDIV exists. And it will vary depending on materials, size of flaw, state of material, etc. Once initiated, PD will continue until the voltage falls below the partial-discharge extinction voltage (PDEV). As damage to the insulating material increases, the PDIV and PDEV can decrease, resulting in PD activity that starts at a lower voltage level and continues longer (until voltage levels fall below the now lower PDEV).

Since most electrical systems run on alternating current, the insulation experiences changes in electrical stresses throughout the sinusoidal cycle. This typically causes PD to peak during the first and third quarters of the cycle—when the capacitive charge across the flaw is increasing in the positive direction (first quarter) and when the charge is increasing in the negative direction (third quarter). PD typically dies down when the voltage is close to zero. This creates distinctive PD activity (Figs 3, 4).

The fact PDIV usually is higher than PDEV has a direct influence on testing procedures. PD tests typically are performed at above rated voltage, to make sure that the PDEV in an insulation system is above rated voltage. Imagine that a switching transient raises the voltage across the insulation to a level above the inception voltage for a brief moment. If the extinction voltage is below rated voltage, the PD, which started because of the transient, will not become extinct after the transient has passed, leaving the system with continuous PD activity.

Equipment susceptibility to PD. Any device that has electrical insulation can be subject to PD—including rotating machines, transformers, potential transformers, current transformers, breakers switchgear, cables, bushings, large motors, etc. The phenomenon can occur in any type of insulation: solid, liquid, and gas. It also can be found at the boundaries of different insulating materials. Recall that some insulating materials are significantly less vulnerable to PD damage than others—like porcelain, glass, and mica. 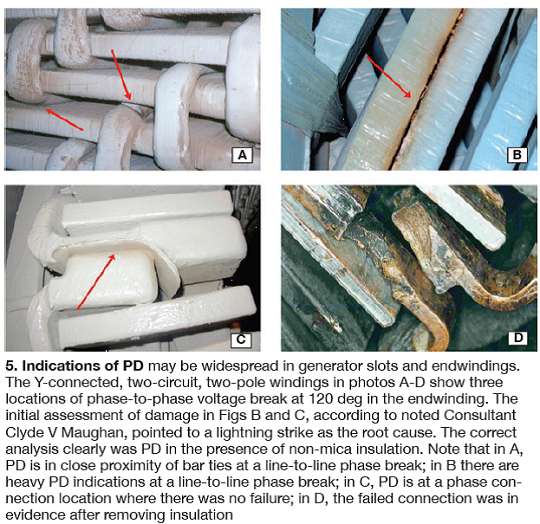 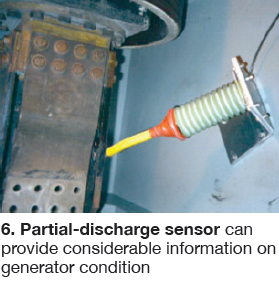 For example, one non-intrusive method of measuring PD is with a high-frequency current transducer (HFCT) attached to a device’s ground. PD creates electromagnetic waves, which propagate to the ground.

Once detected, other testing methods can pinpoint the location of PD activity.

Levels of PD. Low levels of PD may be acceptable if believed unlikely to result in failure. Thus, the goal of detection and monitoring is to identify PD thought undesirable (that is, a risk). The levels of PD can be divided into three categories:

1. PD is at a low (acceptable) level and unlikely to develop into a fault.

2. PD is at a level that requires more investigation—that is, there is a risk of developing into a fault.

3. PD level indicates a fault is likely and failure is imminent.

Note that some insulation systems have “inherent” PD—the mica insulation on rotating machines, for example. Here PD is a function of the aging condition of the machine and it is used to identify problems such as asymmetric aging and certain types of discharges that are harmful to the machine (compared to the inherent discharges).

What PD data can tell you. First, it’s important to recognize that flaws in insulation do not get better over time; they only get worse. So, monitoring PD, periodically or continuously, lets the plant owner determine if the insulation is approaching failure. With the right tools and interpretation, it is possible to predict when a failure is likely to occur.

But to accurately predict a failure, you need accurate PD measurements, the knowledge to interpret the readings, and an extensive database of PD in similar devices operating under similar circumstances to compare your readings to. Trending is critical. When PD data are analyzed, changes in activity can be identified.

According to Dr Hugh Zhu, principal engineer, Doble Engineering Co, and an expert on PD in rotating machines, “PD testing can identify insulation issues as well as other problems—such as, stator winding looseness. The trending of PD activity allows for condition assessment and offers an early warning of potential failures of high-voltage equipment.” CCJ