The challenge was to find a safe and environmentally sustainable way to disinfect bacteria and control algae throughout the cooling-tower system—one that would significantly reduce or eliminate the substantial quantity of disinfectant chemicals needed for “complete control” of bacteria and algae.

Specifically, the plant’s objective was to control bacteria (planktonic colonies) in the bulk recirculating tower water as well as bacterial slime (biofilm and sessile colonies) and algae throughout the tower. Staff based its search for a solution on the following information:

Solution. GRE worked with its water-treatment consultant to develop a safer, more environmentally sustainable approach to reducing their disinfection and algae control chemistry. After investigating several options, staff went with a safe, proven process for generating chlorine dioxide (ClO2) to minimize the use of chemicals at GRE. 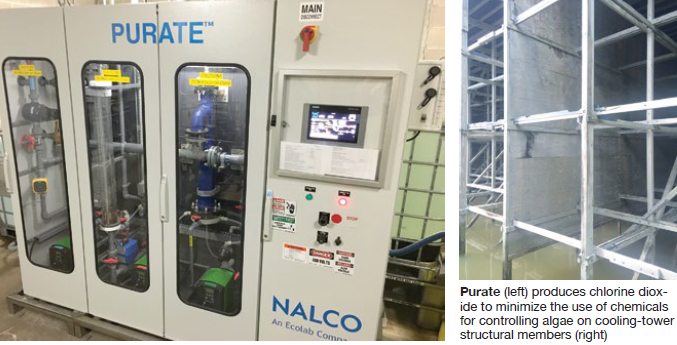 Results. Using the Purate ClO2 generator, plant achieved complete control of bacteria and algae throughout the cooling-tower system as summarized below:

Personnel also noted that switching to ClO2 generation reduced corrosion in the system by raising the tower pH and contributing less sulfates and chlorides.