The bad news delivered by Interstate PowerCare’s J Allen Byrne to owner/operators attending the 7EA User Group’s 2013 Conference, at least the way the CCJ editors interpreted it, was that the federal government apparently knows as much about battery maintenance and testing as it does about healthcare. However, in the case of batteries, there seems to be good news: The IEEE Power Engineering Society’s Stationary Battery Committee created a special task force to review the government’s work and share industry knowledge and experience to help assure that the desired regulatory objectives are achieved.

Byrne, Interstate’s manager of technical support and services, was joined at the 7EA meeting in Monterey, Calif, October 22-24, by Jerry Estes, the company’s manager of sales, service, and support, and an occasional presenter at user-group conferences.

Battery maintenance, Byrne told the group, is regulated by NERC Standard PRC-005-2, which is supposed to assure that all protection systems affecting the reliability of the Bulk Electric System (BES) are maintained in working order. Recall that NERC, the North American Electric Reliability Corp, is directed by the Federal Energy Regulatory Commission (FERC). Other equipment addressed by PRC-005-2, the most violated NERC standard, includes the following:

• Control circuitry associated with protective functions through the trip coils of the circuit breakers or other interrupting devices.

Every BES provider is required by PRC-005-02 to provide a protection system maintenance program to NERC. Here’s the terminology used to define maintenance activities in the standard:

• Verify. Determine that the component is functioning correctly.

• Monitor. Observe the routine in-service operation of the component.

• Calibrate. Adjust the operating threshold or measurement accuracy of a measuring element to meet the intended performance requirement.

Byrne explained that three types of batteries dominate in utility emergency power systems: vented lead-acid (VLA), aka flooded batteries; valve-regulated lead-acid (VRLA), aka absorbed glass mat (AGM) or gelled electrolyte; and nickel cadmium (NiCd). In powerplants, VLA batteries are the most popular of the three, he said. VRLAs are sold as maintenance-free, Byrne continued, but he suggests they cannot be maintained properly. NiCd batteries cost about three times what lead-acid batteries do.

Batteries 101. Here’s a quick review of key facts about batteries before getting into the regulations. By show of hands, most attendees at the 7EA meeting said battery maintenance was one of their responsibilities. Byrne began this part of his presentation by listing the predominant causes of battery problems; they are:

Expanding on the last point, proper maintenance will prolong life and ensure the battery will meet expectations. Getting up close to your batteries during maintenance is the best way to determine if a potential failure mechanism is already at work and to predict when replacement will be necessary. It’s not whether batteries will fail or not, it’s when. The speaker challenged the attendees “to figure out when.”

Batteries are the weakest link in the plant, Byrne told the group, and they are critical to the reliability of the BES. He mentioned this startling statistic: 85% of the failures experienced by UPS (uninterruptible power supplies) and power systems have been attributed to battery failures or the improper management of them.

Batteries may not appear “sensitive,” but they are. Consider this: The lead/calcium flooded batteries typically selected for powerplant service should be maintained at about 70F-77F for best results; every 18 deg F above that upper limit cuts battery life in half. In case you’re not familiar with the “calcium,” it is added to battery plates to improve performance and reduce internal gassing.

Load test. The only way to determine if a battery is operating correctly, Byrne continued, is by conducting a load test. This was the first time the speaker mentioned the need for periodic load testing, something he would say three or four more times during his presentation to reinforce the point. Load testing is one important area where the electric-power industry differed with the people responsible for the development of PRC-005-2, which focuses on “monitoring” and virtually ignores, in the industry’s view, “verify” and “inspect.” What the NERC standard suggests for ensuring battery reliability—ohmic measurements—Byrne stressed, does not do that.

He next offered a summary of best practices for batteries from the IEEE standards identified below. These documents can be ordered online, for a fee, through the international society. IEEE Std 450 is for VLAs: “Recommended Practice for Maintenance, Testing, and Replacement of Vented Lead-Acid Batteries for Stationary Applications.” A similar standard, 1188, is for VRLAs, with 1106 for NiCd batteries. Both 450 and 1188 began their lives as standards for nuclear plants, Byrne said.

Additionally, IEEE Std 1491, “Guide for Selection and Use of Battery Monitoring Equipment in Stationary Applications,” lists and explains 18 parameters that can be measured and monitored. Finally, IEEE 1657, “Recommended Practice for Personnel Qualifications for Installation and Maintenance of Stationary Batteries,” defines the areas of recommended knowledge for installers and maintainers of batteries and related systems to the extent they affect the battery. All Interstate PowerCare personnel are qualified to 1657.

Industry gets involved. In January 2012, Byrne said, the IEEE Stationary Battery Committee (SBC) registered alarm at some items in the third revision of PRC-005-2 and created a special task force to review the document. SBC later was represented on several meetings of the NERC System Protection and Control Task Force and participated by developing some of the language modifications included in the final draft dated September 2012. The draft wound its way through the lengthy approvals process and was submitted to FERC last February with an expected release date before the end of 2013. But Byrne intimated that was unlikely to happen because of “too many loose ends.”

Work began on PRC-005-3 about a year ago. It will modify PRC-005-2 to address a directive issued by FERC in Order 758 for NERC to include the maintenance and testing of reclosing relays that can affect the reliable operation of the bulk power system.

Just before reviewing the minimum maintenance activities and maximum intervals specified in PRC-005-2 for generator owners using time-based maintenance programs, the speaker took a couple of minutes to remind the group why there are codes and standards. He put up a picture of a typical code-compliant VLA installation (Fig 1) and contrasted that with the Rube Goldberg in Fig 2. 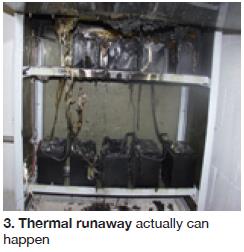 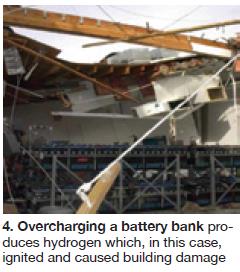 Fig 4 got everyone’s attention. Lead-acid batteries produce hydrogen gas when overcharged, generally not much of a problem. But when the overcharge is severe and ventilation inadequate, an explosive concentration of hydrogen may collect within the battery enclosure. Provide a source of ignition and bang!
Fig 3 shows that thermal runaway actually can happen. It occurs while a battery is on charge and the heat generated during the charging process exceeds the rate at which the heat can be dissipated through the battery case to the environment. The battery then demands more float current, which ultimately leads to thermal runaway.

Byrne then flipped through a bunch of slides that outlined the maintenance activities and maximum maintenance interval for each of the battery types. You can access this material by clicking on the first link above. Next, the speaker compared the IEEE standards to PRC-005-2, illustrating that the federal standard intended to protect the BES is significantly less rigorous than IEEE standards that have been in existence for years. Here are some examples:

• A lot of information about a battery can be detected by the trained eye and knowing what to look for—such as physical damage, case swelling and leaks, terminal corrosion, condition of ventilation and monitoring equipment, etc. IEEE recommends visual inspections monthly, PRC-005-2 every four months. However, if the battery system is monitored, a visual inspection is never required.

• Some basic meter readings and measurements help ferret out battery problems so adjustments can be made where appropriate. IEEE recommends that the following measurements be taken monthly: overall float voltage measured at the battery terminals; charger output current and voltage; ambient temperature; and dc float current per string. PRC-005-2 only requires these measurements at 18-month intervals.

• Annually, IEEE recommends a structural evaluation of the battery rack or cabinet; cell-to-cell and terminal connection resistance of the entire battery (re-torque if any reading is outside the manufacturer’s specifications); and impose an ac ripple current and/or voltage on the battery. If you guessed PRC-005-2 also requires these be done on an 18-month interval, you’re correct.

Apparently, there’s a big difference of opinion between the electric power industry and NERC when it comes to the use of Ohmic measurement for determining a battery’s health. IEEE Std 1491 defines the term as “A measurement of the electronic and ionic conduction path within a cell or unit, using terms defining condition commonly known as impedance, conductance, or resistance.”

Although more than 90% accurate, Byrne said Ohmic measurement cannot determine with full certainty a battery’s health. Results can be controversial and misinterpreted. However, they can be used as a trending tool to identify cells requiring further evaluation for degredation. The only truly accurate method for assessing battery health is a full-load test using either the battery’s actual load or a load bank. A load test is a battery discharge test that may be required to:

• Determine if the battery will meet its duty cycle.

• Determine if there is a problem with the battery.

• Confirm that other indicators are correct and there is a problem with the battery.

The requirement for a full load test often is a judgment call by the battery owner and may depend on the criticality of the battery. If done, load testing should only be conducted by knowledgeable personnel. CCJ