Participants in the 29th annual conference of the Ovation Users Group, hosted by Emerson Automation Solutions’ Power & Water, in Pittsburgh, July 24-28, 2016, were, as in past years, treated to a plethora of advanced capabilities and current experiences with what is now the dominant automation system at US combined-cycle facilities.

Based specifically on the information presented, it is fair to say that the distributed control system (DCS), which later became the digital control system, is becoming a term of nostalgia. It is being replaced by a plant knowledge platform integrating control algorithms, real-time and historical plant data, synchronized simulation, monitoring and diagnostics (M&D) and prognostic capabilities, and immediate decision support for plant staff from the digital platform itself as well as from remote experts monitoring and overseeing plant systems.

This is, of course, an industry trend, not limited to Emerson Ovation™. But coverage of multiple automation user groups over the last several years shows that Emerson may be pushing the envelope faster and harder than others.

The plant—and the virtual plant. If you’re wondering what all this will mean for the person sitting in the control room, imagine two large screens. On the left is the plant in its current operating mode. On the right is the “virtual plant,” a high-fidelity digital simulator of the physical plant. The plant simulator screen is “synchronized” with current plant operating data with the push of one button. The simulated plant can be made to “run” up to 10 times faster than the real plant.

This allows operators and engineers to test things in real time. If the test ends up tripping the virtual plant, it’s of no consequence. Operating issues can be identified before they occur and addressed before they do physical damage or impair performance. All of this plant experience is captured digitally, and automatically, for knowledge transfer to those with a need to know.

Emerson Electric Co has consolidated its five business segments (Emerson Process Management, Network Power, Industrial Automation, Climate Technologies, and Commercial and Residential Solutions) into just two: Emerson Automation Solutions and Commercial and Residential Solutions. Emerson Automation Solutions essentially is what was Emerson Process Management, the entity likely most familiar to owner/operators of generating equipment, plus a few other companies. Some businesses, such as Network Power, which makes power systems that work with telecommunications and data networks, were spun off.

The restructuring, announced in mid-2015, was finalized Oct 1, 2016 to build value for customers, employees, and shareholders. The realignment is said to create a highly focused portfolio organized around a solutions-centric business model to deliver on the company’s promise: “Consider it Solved.”

Step by step. Several elements (or aspects) of Ovation virtual, and even augmented, plant reality are being demonstrated in the field today. Southern Company, for example, is demonstrating “embedded simulation,” essentially an Ovation workstation with a running simulator. A coal-fired plant in the West is demonstrating how embedded pattern-recognition and predictive-analytics algorithms provide early warning for fan/motor issues.

In-house Emerson vibration data and analytics for critical rotating equipment, such as the main turbine/generators and feedwater pumps, have been integrated into Ovation. The integrated Ovation Health Monitoring Module is undergoing beta testing at a 535-MW coal-fired unit.

The overall objective is a “virtual human learning environment,” according to Robert Yeager, president of Emerson Automation Solutions’ Power & Water, which provides plant staff with knowledge and experience in real time. One issue which has to be addressed is avoiding the “alarm flood” which occurred 10 years ago with advanced DCS.

With regard to M&D and prognostics, “the idea is to identify anomalies at the data rates of the DCS (compared to external pattern recognition software packages), or 100 microseconds, make the right experts aware of the anomalies, and address them before they become big problems.” Earlier coverage of the 2016 Ovation User Group meeting addressed this feature.

In an exclusive interview, Emerson’s Rick Kephart noted that the human-machine interface becomes even more critical in linking the real- and virtual-plant worlds. “The operator of the future will be able to always ‘look ahead’ with the simulator screen,” he elaborated, “but must still be keenly aware of what is happening now.” How to best present the information is still being worked out, but models are available from other industries—such as aerospace flight deck simulators and control systems.

Ultimately, the goal is to avoid human error by integrating the virtual knowledge environment in a way that assists the human operators and experts.

From the M&D perspective, another way to imagine the impact of these trends is much of the capability that today resides at the centralized M&D centers, built out by many utilities and owner/operators over the last 10 years, can now be migrated back to the plant automation and knowledge platform.

Business applications too. The integrated platform doesn’t just include advanced control, M&D, and prognostics. Emerson’s Ranjit Rao discussed the addition of advanced power applications, defined as those having a “business driver.” So-called sequential automation using embedded sequence flow charts (SFC), for example, allows operating sequences or procedures to be more precisely controlled, reducing the variability which crops up among different operators and their operating styles.

Model-based predictive control (MBC) can be used to calculate optimal trajectories of process variables under startup, shutdown, cycling, and other dynamic (non-steady-state) conditions. An example is the ability to pre-emptively position attemperator sprays to control superheat and reheat steam temperature before the temperature actually begins changing in the wrong direction. 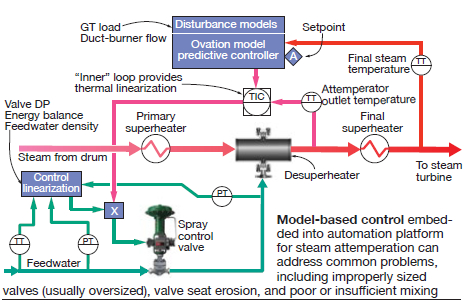 Embedded MBC, in one case study, was able to increase operating steam temperature by 8 deg F, without the temperature excursions previously experienced during load changes, resulting in an immediate heat-rate benefit. In another case, the mean error around main steam and reheat steam temperature was reduced to less than 1 deg F with a standard deviation of 1 deg F on a gas-turbine ramp from 0 to 180 MW.

Rao stated that, in one case, statistical analysis combined with embedded SFC was able to reduce fuel use during startup by 58% compared to the baseline. More precise control of process parameters also reduces stress on valve movement, valve stems, rotating equipment, and, for that matter, any equipment which has to physically move to respond to process signals.

Statistical analysis also can be applied to startup signatures to reduce fuel consumption or achieve other performance goals.

Similarly to pattern recognition, sequencing schemes for starts, stops, and cycling have been applied for years at gas-turbine-based plants. The difference here is that they are now being embedded into the comprehensive knowledge platform anchored by what used to be called the DCS.

With proper upfront analysis, Emerson may be willing to provide guarantees around some of these performance benefits, such as fuel savings and heat-rate gains. In addition, Ovation experts are available to assist plant staff in monitoring equipment and assessing operational performance for the various operating regimes plants have to deal with today. As one example, Emerson acquired MRG, a reliability consulting group, whose experts can now be harnessed for plant and fleet assessments.

A unifying platform. The value of the integrated platform can be significant. According to Steve Schilling, VP of technology, network equipment costs can be reduced by 50%, systems integration costs by 40%. There’s reduced commissioning time and fewer spare components are required.

Today’s plant knowledge platform could include the GT control system; the steam-cycle control system; the plant DCS; a separate data network and historian; various PLCs operating in the water treatment, fuel delivery, and HRSG duct-burner areas; and various software packages, including vibration monitoring, thermal performance, and pattern recognition around critical components. Today, all of these require separate data links, protocols, and network transmission devices linking to the control system at most plants.

A considerable amount of complexity is avoided by integrating all of this, to the extent possible, into one platform – with a sole source for cybersecurity solutions to boot.