With gas-turbine OEMs offering combined cycles at efficiencies topping 60%, in some cases, you might think you’ve heard the last about cycle improvements. But that’s not true. A few enterprising and equipment-savvy engineers recently have identified ways to tweak the Brayton and Rankine cycles to address shifts in the electric generation business caused by changes in regulations.

Many coal- and oil-fired units that could be shuttered by regulatory edict because of pollutant emissions are viable candidates for a CCR retrofit, Skowronski said—especially those built after about 1960 and having nominal steam conditions of at least 1800 psig/1000F/1000F. Gas-fired steam plants are particularly well suited for CCR conversion because the fuel-supply infrastructure exists.

Cycle overview. Fig 1 illustrates a conventional combined cycle with the benefit of regeneration. For a retrofit application, the regenerative portion of the steam plant (tinted area) would be retained as is. Only three feedwater heaters are shown here to simplify the drawing.

Important to note is the addition of a fired, mini heat-recovery steam generator in the exhaust duct upstream of the conventional HRSG. Purpose of the “regen-assist” combustion section is to raise the enthalpy of the GT exhaust; the heat added is extracted in the main-steam and reheat coils immediately downstream. Thus the enthalpy of the exhaust stream entering the conventional HRSG is the same as that with no regeneration. The amount of heat added and extracted by the mini HRSG varies with specific plant requirements. However, the temperature downstream of the regen burners generally should not exceed 1750F, based on the recommendation of the leading HRSG manufacturer Markron is working with.

Condensate flow is divided into two streams. One stream is routed via the feedwater heaters and heated by turbine extraction steam. It is directed to the HP module in the mini HRSG. The other stream flows to the conventional HRSG. HP steam produced by both the mini and conventional HRSGs mixes at virtually the same pressure and temperature just ahead of the HP turbine steam chest. Likewise, cold reheat steam exhausted from the HP cylinder is reheated in the mini HRSG and combined with IP steam from the conventional HRSG ahead of the IP turbine.

Skowronski pointed out during a telephone interview with the editors that there are significant negative technical and financial impacts associated with reusing the steam turbine from a conventional steam plant as part of a retrofit combined cycle by blanking off bleed points, as some have done. Turbine flows, bearing loads, etc, change when the bleeds are eliminated, he said, and a considerable shop effort is required to adapt the turbine for use in the reconfigured cycle. Plus, a non-regenerative turbine is less efficient than a regenerative turbine so there’s an ongoing heat-rate penalty associated with its use.

The former SCE consulting engineer (one of 12 in an organization with more than 700 engineers) added that the heat rate associated with the repurposed regenerative cycle typically is the gross turbine heat rate plus 15%. This will always be about 600 Btu/kWh less, he said, than the combined-cycle heat rate with duct burners running full bore. And also less than that of a simple-cycle gas turbine. The cost of adding the mini HRSG and associated piping to take advantage of this benefit is a nominal $75-$100/kW.

Of particular interest regarding retrofits is the ability to fill the existing turbine with steam without having to install more GT capacity than might be required. This minimizes the “overbuild” when repowering a steam plant with a large turbine.

Skowronski estimates that CCR reduces the capital outlay for repowering applications by 35% and for new installations by 15%. One plant owner familiar with the CCR system but with no opportunity for repowering told the editors it certainly was worthy of consideration for a new combined cycle. He said his company explores every real opportunity to gain a competitive advantage with higher efficiency. This same person thought it unlikely that retrofitting an existing combined cycle with a regenerative Rankine cycle would be economically viable.

Economics. Kincaid, the business half of Markron (undergraduate degree in economics, an MBA, and more than 25 years of experience in utility and power economics), ran through an analysis that showed the 600-MW repowering of an existing steam plant using CCR rather than a conventional combined cycle produced $200 million in present-value savings—assuming a 30-yr life, a discount rate of 8%, constant gas price of $3.50/million Btu, 50% capacity factor, and 12% carrying charge.

He based the calculations on an $850/kW capital cost for a conventional 600-MW combined cycle with a heat rate of 6700 Btu/kWh. Repowering with a 2 x 1 CCR reduced the capital cost to $525/kW because a new steam turbine was not required and the GTs and HRSGs would be smaller than those required for a conventional combined cycle. For this case, the weighted average heat rate was 7180 Btu/kWh, or a 480-Btu increase over the conventional combined cycle. The fuel penalty associated with the CCR is $4.4 million/yr using the assumptions in the previous paragraph.

Fig 2 compares the levelized total costs for repowering with a conventional combined cycle and with a CCR, at different gas prices. The curves assume O&M is $20/MWh for both cycle arrangements. 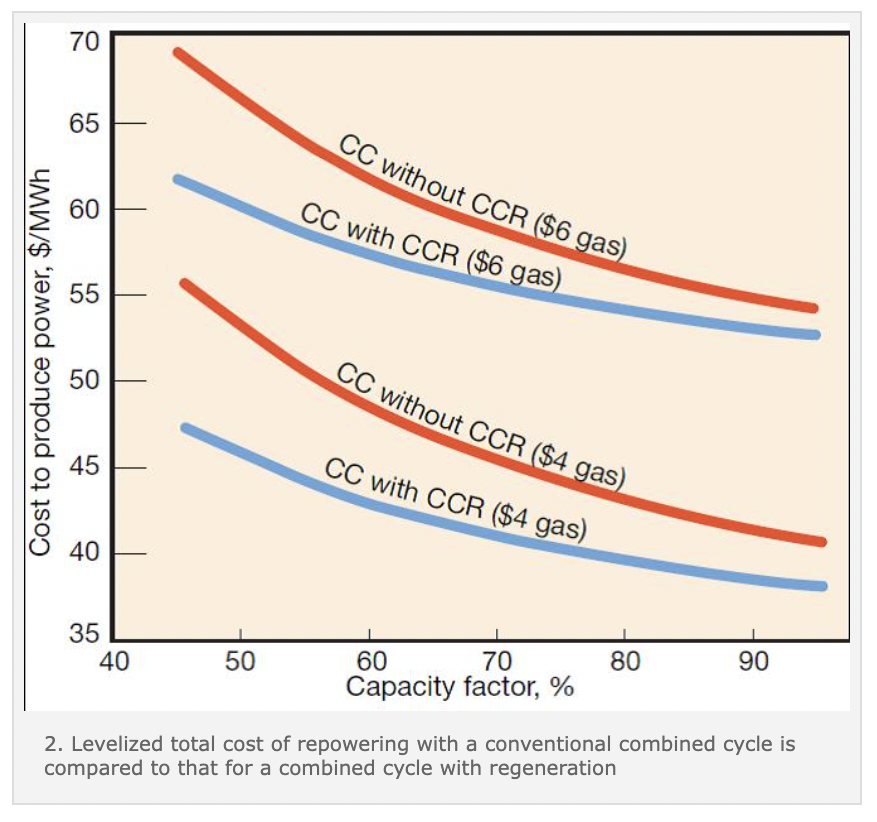 Case history. A cursory review of plant data available in the CCJ offices pointed to several steam units nationwide rated between 100 and 200 MW and installed between the mid-1960s and mid-1970s. Stands to reason that no one would be upgrading emissions controls on coal-fired units in that range and gas-fired units could be replaced by one or two LMS100s with a better heat rate. In the minds of the editors, these might be candidates for a combined-cycle retrofit and asked Markron to run a “back of the envelope” engineering/financial analysis assuming repowering with a conventional combined cycle and CCR.

The station selected by the editors is equipped with two 110-MW gas-fired boilers and reheat turbines having a throttle flow of 750,000 lb/hr of 1900 psig/1000F steam. Five stages of feedwater heating are used and the design station heat rate is 9800 Btu/kWh. Gross turbine heat rate is 8000 Btu/kWh. The foregoing numbers are nominal. Here’s how the analysis worked out:

Skowronski proposed a 2 x 1 combined cycle powered by two GE 6FAs. With the 15% altitude derate required for the site selected, the owner gets 200 MW of total combined-cycle output, including 72 MW of regular combined-cycle steam. Adding 43 MW of CCR nearly fills the newest of the two steam turbines to its maximum capacity of 115 MW. Total station output would increase by 17 MW to 243 MW.

Kincaid jumped into the conversation at this point, saying that the cost for the repowering project would be $545/kW ($132 million) and have an annual carrying charge of $16.5 million. The fuel saving, estimated at 3330 Btu/kWh would total $19.5 million annually—assuming a 55% capacity factor and gas at $5/million Btu. This results, he said, in an annual net saving of $3 million and a 30-yr present value of the savings at about $30 million.

A new brownfield combined cycle at the same site with the same output (if available) would cost $207 million and have an annual carrying charge of $25.8 million. This unit would save only $21.4 million/yr in fuel so the net loss would be $4.4 million annually. By way of comparison, gas would have to be in the neighborhood of $6/million Btu before a combined cycle would break even.

Keep in mind that the foregoing example is for a relatively small steam plant. The CCR approach may provide even greater benefits for the repowering of larger steam plants (those with ratings of 400 to 500 MW) because of their significantly lower conversion costs (per megawatt basis) and their greater flexibility in sizing the repowering project to meet load requirements. CCJ