Most equipment-oriented technical papers presented at industry conferences, and articles that appear in electric-power publications, are based on supplier input and typically discuss expectations for new or improved systems and components rather than field-demonstrated experience. CCJ ONsite and CCJ (print) focus on the latter, to the degree possible. Many of the editors’ daytime hours are spent in the field and on the phone learning from their network of sharing users to provide you actionable information.

A case in point is the dual-fuel retrofit of two W501FC gas turbines at the privately held Termocandelaria peaking facility near Cartagena. In 2006, the Colombian government promulgated a regulation that directed thermal plants unable to negotiate firm natural-gas contracts to guarantee their energy obligations with the electrical market by using fuel oil in a firm contract base.

The modified units can burn either oil or gas; they are not arranged for co-firing (simultaneous combustion of both oil and gas). Gas is the fuel of choice and usually available.

In 2009, the editors asked Plant Manager Miguel Perez Ghisays (today General Manager) when he was interviewed for the first article to share operating experience with his colleagues worldwide when there was significant oil firing experience to report. That finally happened this year when the country’s hydroelectric resources were diminished by El Niño weather patterns and the market required baseload dispatch of Termocandelaria and other thermal powerplants on oil (Fig 1). 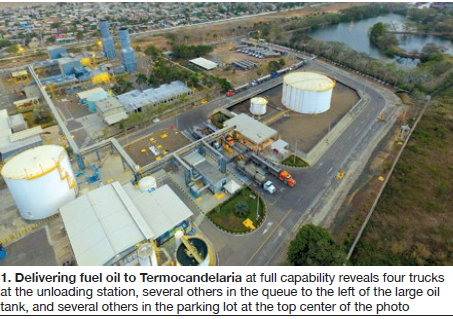 Data in hand, Perez Ghisays contacted the editors from the office of Scott Cloyd, MHPSA’s general manager of gas turbine service engineering, during a recent visit to Orlando. Also on the call was Termocandelaria’s Operations Manager Policarpo Batista, who was a shift supervisor when the plant was converted to dual fuel.

Cloyd began the discussion with a review of design goals for the retrofit combustion system. At the top of the list: High starting and operational reliability on oil. This goal, Cloyd said, was enabled by the systems designed and supplied by MHPSA which recognized the benefits of diffusion-type combustors for fuel-oil operation and the value of the company’s enhanced nozzle design and control philosophy to eliminate flow dividers.

The second most important design goal: Satisfy the fuel-consumption demands of the gas turbines during continuous baseload operation. Cloyd noted that each engine burns about 200 gpm of distillate at rated capacity. This requires the ability to unload three to four oil tank trucks per hour and enable continuous fuel treatment to clean the oil and reduce the potential for contaminants that could harm turbine components.

The El Niño weather pattern lasted from December 2015 until April 2016. During that time, Unit 1 started a dozen times on oil and ran 1113 hours on liquid fuel; Unit 2 had eight starts and ran 1269 hours. Both engines were dispatched by the system administrator about 90% of the time at their nameplate ratings. Starting reliability on oil for both engines was 100%. Reliability and availability of both engines exceeded 98% on oil, just as they had on gas.

Both “regular” distillate and ultra-low-sulfur oil were burned during El Niño. No problems were encountered with either fuel during unloading, treatment, forwarding, and combustion. Results of borescope inspections before and after the oil run revealed no degradation of hot-gas-path components. NOx emissions were maintained below the World Bank standard of 88 ppmvd on oil (66 ppmvd on gas) with correction to 15% O2. CO emissions are not regulated; continuous emissions monitoring is not required.

The logistics of operating on fuel oil delivered by truck compared to pipeline supply of gas was a daunting challenge. Plant personnel had to closely monitor deliveries, fuel quality, and fuel processing. Perez Ghisays and his staff responded by splitting into teams to manage logistics and unloading operations efficiently (Fig 2). 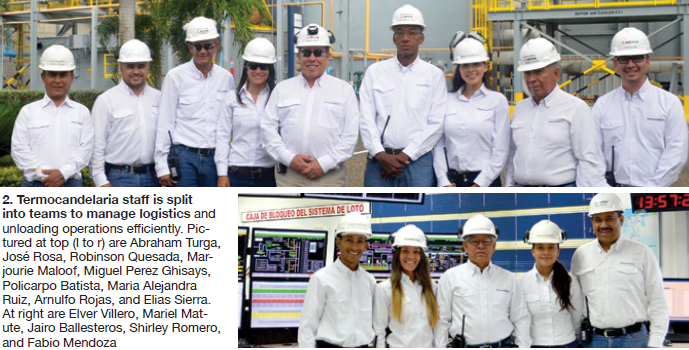 Discharging cargo from four tanker trucks of up to 12,000-gal capacity simultaneously was successful (Figs 3, 4); no downstream issues were encountered. Oil was sampled randomly and all samples met specifications. The original unloading plan developed during fuel-oil commissioning accomplished all operational and technical requirements. Termocandelaria received oil from three terminals, two within about five miles of the plant and the third about 65 miles away. 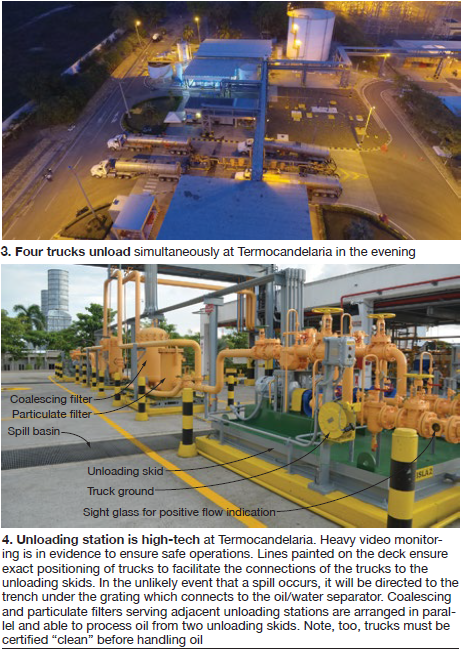 The transport contractor guaranteed the number of trucks necessary to satisfy baseload operational requirements. At times, 16 would be in the queue to permit the unloading of 72 trucks in a day to fulfill the dispatch. No technical difficulties were encountered while unloading the 2800 trucks required to accommodate the El Niño phenomenon.