Good news about fuel flexibility came to the powerplants in the Odessa (Tex) area in June 2010. A pipeline to deliver natural gas directly from the Yates Formation in the Permian Basin was announced. However, the fuel was off-spec, containing high levels of nitrogen (Sidebar 1). Scrubbing out the nitrogen was cost-prohibitive.

But blending it with spec fuel could reduce overall fuel costs and the nitrogen content of the final mixture. At least two plants in the area decided to install fuel blending stations. This article presents the details of the approach used by Plant A, described in Sidebar 2, with some comparison to the approach taken by the other facility (Plant B). Key to success is an analyzer that can determine the composition of the blended fuel in near real time.

Fuel-gas blending at power stations is not new. Typically, one source is placed on flow control, and the second source on pressure control so that (1) as much as possible of the less expensive gas is burned and (2) the amount from one source can be controlled to meet contractual limits, especially take or pay contracts.

However, most plants have not blended fuel gas based on specific gas constituents. Some constituents are difficult to measure in real time, which is necessary for good control in large homogenous volumes. The challenge here was to use a measurement of one of the easier fuel constituents to track—hydrocarbons—to control a more difficult-to-measure constituent, nitrogen.

The gas turbines at these sites are unable to burn 100% Yates Formation fuel. High nitrogen will lead to excessive NOx emissions. Plus, the large inert fraction has a negative impact on flammability limits. Low flammability ratio makes it difficult to maintain stable combustion across the operating range. Therefore, blending of Yates gas with pipeline-quality gas is necessary to maintain performance within the prescribed range, and still burn as much of the less expensive off-spec fuel as possible.

The fractional analysis of the off-spec gas (Table 1) shows that it is 28% nitrogen, while pipeline gas is 2% nitrogen. If the gas is blended 50:50, the total nitrogen content would be 15%, the upper limit recommended by the turbine manufacturer for these machines (Table 2). 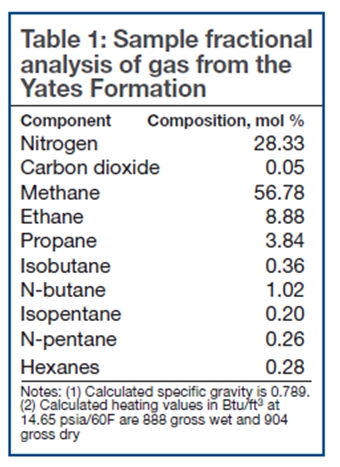 Investigation suggested that it is easier to blend based on hydrocarbon content than inert gas, because determining heating value is relatively easy. Several analyzers are available commercially to provide real-time, or nearly so, analysis of hydrocarbon content. At least one gives real-time analog outputs for both Btu content and Wobbe Index. Interestingly, heating value is not the “standard” you may think it is; there is disagreement about the formula used to derive it.

The Wobbe Index is defined as WI=CV [divided by] SG[0.5], where CV is the calorific value (higher heating value, HHV) of the fuel and SG is the fuel’s specific gravity. Heating value is in units of Btu/ft[3].

It is common practice in the electric power industry top use the lower heating value (LHV) when calculating the thermal efficiency of gas-turbine cycles. GE and others use the Modified Wobbe Index (MWI) as a measure of the interchangeability of gaseous fuels for a given system design.

Because the Wobbe Index indicates the interchangeability of the fuel gases, it can be used to control blending. Both Wobbe Index and heating value make similar curves, so either can be used to control the nitrogen content of the final blend. The traditional method of controlling the blend, flow control for the off-spec fuel and pressure control for the pipeline gas, is simpler but certainly not the optimum.

Two approaches for fuel blending were evaluated: one blend station at the fuel yard and individual blend stations at each gas turbine. Plant B, which has different GE engines than Plant A, opted to install a single blending station in its fuel yard to serve both the gas turbines and duct burners. This facility is equipped with selective catalytic reduction (SCR) units for NOx control.

Plant A opted for multiple blending systems because it intended to burn the mixed gas only in its turbines and believed the additional operating flexibility offset the higher cost of multiple stations. Plant A personnel saw these advantages of the multiple-blend-station approach:

The instrument accepts a sample from a Genie® Probe regulator, manufactured by A+ Corporation LLC, Gonzales, La, with these benefits:

Actual blending of the fuel sources is accomplished in a “T” downstream of the off-spec gas flow control valve. In order to properly mix the fuel gases, a 30-psi minimum differential is maintained between the two gas supplies at the blending stations.

The heating value of pipeline-quality fuel is relatively constant because of the large volume of gas in the line. By the same token, the off-spec gas is expected to be equally consistent in composition because of the size of the formation. One sudden event that should be considered, though, is the possibility of analyzer failure.

As mentioned earlier, nitrogen lowers the rich to lean flammability limits. Flammability ratios of less than 2.2:1, based on volume at standard conditions, may cause unstable combustion over the operating range. While gas turbines can be designed to operate with wide ranging fuel characteristics, the variation of a specific fuel system is usually limited to [plus over minus]5%.

Fuel nozzles are designed to operate within a fixed range of pressure ratios; changes in heating values are accommodated by increasing or decreasing nozzle area or the fuel gas temperature. 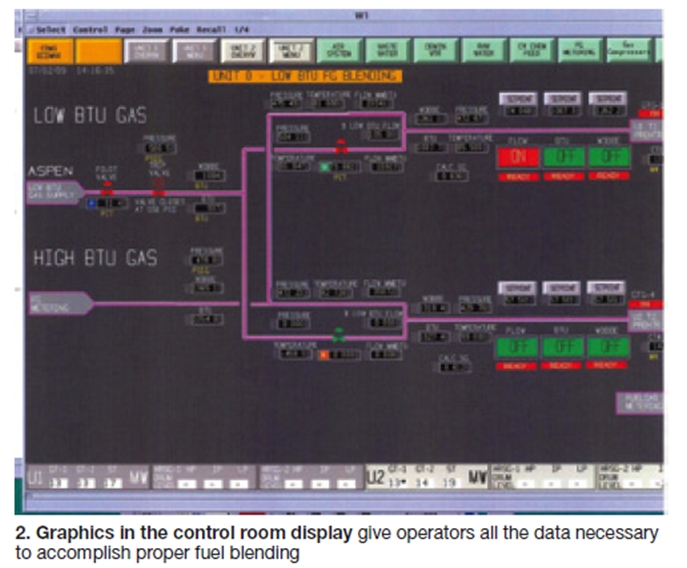 In the event that the turbine control system sends a signal to the DCS indicating poor combustion, the DCS acts to maximize the use of low-cost fuel by first decreasing fuel temperature, then reducing the amount of off-spec fuel.

The maximum ratio of off-spec fuel is 50%, but the minimum limit is set by blending system characteristics. To keep startups trouble-free, only pipeline fuel is used. Once the unit is up and operating reliably at a given load, the operator puts the blending station into service.

Blending-station logic configuration is programmed into the plant DCS. An Allen Bradley PLC (Rockwell Automation Inc, Milwaukee) in the fuel yard interfaces with the DCS to gather data and control blending. Monitoring and control of the blending stations are done through the control room operator interface (HMI). Operators can select heating value, Wobbe Index, or flow  as the basis for control. Graphics give the operator a visual presentation of all data related to fuel blending (Fig 2).

A few years ago, several companies formed a partnership to provide less-expensive fuel for generating electricity in West Texas. The result is a 62-mi pipeline that supplies off-spec gas (high nitrogen content) direct from Permian Basin wells. The fuel, extracted from a depth of about 3000 ft, had been considered uneconomic because the nitrogen would have to be removed before being transported in conventional pipelines. Over 200 old wells drilled to a 4800-ft-deep oil formation are available to produce natural gas from the Yates formation. The gas-turbine supplier confirmed that the off-spec gas could be burned in its units on a blended basis, making it economical to deliver the fuel to generating plants powered by gas turbines.

The 1000-MW generating station, which started up in 2001, is comprised of two 2 x 1 combined cycles powered by GE 7FAs equipped with dry low NOx burners. The four heat-recovery steam generators (HRSGs) have duct burners for supplementary firing. Pipeline quality gas containing between 1000 and 1025 Btu/scf is supplied from two sources. The fuel passes through a knock-out separator before being sent to the plant. It is preheated to 300F before entering the gas turbines. An Ovation® distributed control system (DCS) from Emerson Process Management integrates the gas and steam turbine control systems for remote start/stop, data monitoring, and data collection. Prior to this project, no gas metering or fuel composition data were taken at the fuel yard or the units.

During commissioning, both methods of controlling fuel blending were tested but no differences were identified between the Wobbe Index and heating value. Because the Wobbe Index is incremented in finer divisions, one would expect that finer blending control could be obtained, but for this application, such fine adjustments are not necessary. Off-spec gas on flow control is the default blending control method. This method was also tested, both as an operator-selected operating mode and as a default control mode should one of the analyzers fail.

*Mike Segers, a professional engineer with over 30 years of I&C experience, managed the fuel blending project for Hurst Technologies Corp. This article was developed from a paper presented at the ISA Power Industry Division’s 54th Annual I&C Symposium.