Challenge. This plant has the multi-faceted goal of continually improving performance by maximizing availability and startup reliability—along with reducing costs. With 250-300 starts per unit per year, personnel are increasingly challenged with making sure the plant is available when needed and when it can best capture opportunities to serve load and take advantage of wholesale power markets. Its biggest costs are fuel and maintenance. How does one both reduce these costs and optimize reliability and availability?

Solution. Plant personnel realized that, in order to address this goal, they needed to invest in software to help detect and diagnose emerging equipment and process problems early. This would reduce the high costs of derates and unplanned outages. In addition, if they could improve efficiency, they could attack their biggest cost: fuel.

The plant found that no one solution does it all and integrated into a powerful package several analytic and diagnostic tools (Fig). The plant used a stepwise approach as opportunities arose and found that these systems, working together, provide strong value relative to their costs. Benefits include: 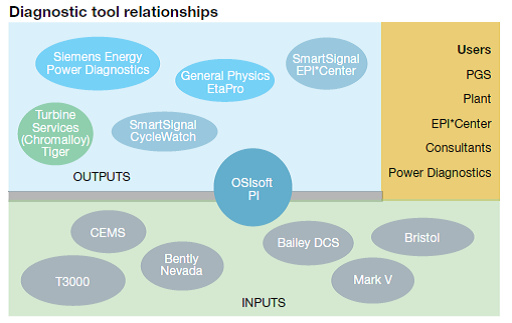 The data then are analyzed by a group of applications that reinforce each other as analytical tools. They are used as diagnostic tools and troubleshooting aids for quick evaluation of problems. With this package of tools, the plant has been able to decrease unplanned outages and reduce maintenance costs. The plant now is extending its success to include a solution that will help improve fuel efficiency.

Each tool has its function. They are presented here, in the order in which they were deployed at the facility:

1. PI (OSIsoft LLC): A data collection and historian system, PI is essentially the enabler of all the other systems below it in Fig 3.1. By installing PI early on in the life of the plant, the plant has archived an immense amount of data that can be trended and analyzed in many different ways. It also allows data to be easily sent off to other users of the information and outside consultants. PI also has very usable search and trending abilities just on its own.

2. Tiger (Turbine Services Ltd): This program is a knowledge-based turbine condition monitoring system. Its strengths lie in having operator-type screens for the gas and steam turbines with learned parameters to highlight unusual points of operation of thousands of analog and digital signals from the turbine controls.

It also has synchronized playback capabilities that allow fast or slow motion playback of all parameters and thus the ability to view unusual events almost as in “real time.” Multi time plots showing overlay of key parameters for the last five startups and shutdowns give a quick view of potential problems. Quick graphs of all analog points and performance reports also help identify issues.

3. Power Diagnostics (Siemens Energy): The gas turbine OEM monitors the GTs via a high-speed data connection and reviews the results daily at the Power Diagnostic Center (PDC). Using its fleet experience and unique expertise, the OEM is able to detect unusual issues early in the cycle. Siemens’ engineers are available around the clock for emergency support and on-line diagnosis.

4. Alarm management system (Matrikon Inc). Alarms were initially printed on a line printer, boxed, and then found to be too daunting a task to search through. All major control system printers were replaced with an interface to the alarm management system. This allows synchronized review of all alarms and events from one interface that can be accessed locally or remotely. The database is archived so alarms and events can be electronically searched and filtered.

5. EPI*Center (SmartSignal Corp) is a predictive diagnostic tool that helps eliminate equipment failure and avoid surprises. It develops the unique operating profiles of all critical rotating and non-rotating equipment across all known loads, ambient conditions, and operating contexts. Every 10 minutes, it captures a snapshot of the plant assets. It compares actual to expected behavior and delivers exception-based intelligence of impending problems.

By looking for changes in learned behavior, EPI*Center is able to detect deviations that are well below control system alarm levels. The plant uses SmartSignal’s Availability and Performance Center (APC) to deploy and maintain EPI*Center and monitor its assets. The SmartSignal engineers in the APC communicate with the plant via phone, email, and weekly calls, jointly reviewing immediate through less critical problems.

6. CycleWatch (SmartSignal Corp): The plant is one of the earliest adopters of this new technology. CycleWatch allows the plant to investigate deviations encountered during start-ups and thereby increase reliable starts in the GTs. CycleWatch can identify certain indicators that are starting to deviate from normal. It processes more data at a higher frequency than EPI*Center, allowing the plant to detect even the slightest deviations from a normal start.

7. EtaPRO (General Physics Corp) is a performance monitoring system with emphasis on heat rate. It looks for system losses and quantifies the impact of failures on capacity and heat rate. EtaPRO is in the process of being implemented at the plant. It will be visible to the operators and have models to optimize cooling tower, condenser, and individual assets. EtaPRO data will feed into SmartSignal, making its models even more robust.

Results. The plant believes that the biggest benefit of these tools is that they provide a strong level of control over the facility. Plant personnel are assured that they are receiving the earliest possible notifications of impending problems. The tools are always there—24/7—watching over the systems and equipment. If there is an impending problem, the plant knows. If it knows, it can fix it—thus meeting its reliability, availability, and cost goals.

The tools provide strong financial value. Personnel say they frequently identify issues, and that the cost of these tools has been saved many times over. Some examples:

Even though it was the height of the summer and system conditions were such that units were on “critical” status, these two tools and the OEM’s recommendation convinced management that the unit had to be taken offline. A transition piece was found to have a major crack and a certain catastrophic failure of the unit was averted. The plant had avoided a wreck that would have taken many more weeks to recover from, and it avoided major financial cost for repairs.

This was the first time the plant had experienced these conditions, but it was seen how close a similar condition and subsequent trip had been many times in the past. With PDC and Tiger diagnostics, the decision was made to simply adjust the pressure switch and restart the unit, thus avoiding a three-day investigatory outage. All of this was done from an engineer’s home.

While observing closely, the operators noticed that the conditions were changing and that the symptoms were getting worse. Fuel piping was inspected. The mechanics found the flange gaskets were excessively tightened and that the spiral wound gaskets were migrating into the fuel gas flow stream. Again, a more serious outage was averted.

More generally, failed sensors and/or drifts in controls or chemistry are identified on a weekly basis. The weekly calls between plant operators and the SmartSignal APC and the frequent emails from the PDC help highlight these potential problems. These issues are resolved prior to them causing forced outages or equipment degradation. Every tool has its purpose.