Challenge. The confined spaces at New Harquahala Generating Station were identified and numbered a few years ago. It appeared that during the initial project, the numbering and identification were likely rushed, and the numbering system was labeled haphazardly from unit to unit. While there was the same number of entrances on the units, the numbers did not match up from one unit to the next.

Employees had to pay special attention to which unit’s information was pulled to identify the space and the hazards associated with it. Employees tried to fix this over the years, but there was still much to be done. Three key issues were found in connection with the confined spaces.

First, it was brought to the safety committee’s attention that employees believed some of the confined spaces had been misidentified and some completely missed. Also, numbering of the confined spaces did not match from unit to unit. The safety committee wanted the job done correctly and in a manner that would last a significant amount of time before needing much work again.

Second, the labels on the confined-space signs, along with a few missing signs, would fade and tear before they were even up for a year or two because of weather damage. The safety committee recognized that the current confined space signs, as they were, could not hold up to the elements of extreme heat conditions and the direct sunlight they were receiving. Something had to be done.

Solution. It became evident that this project would be better served by seeking a contractor to fill the responsibility for completing it. The facility needed to be re-examined by someone to identify if any confined spaces were missed, if any should be divided into multiple confined spaces, and then the numbering system checked to make sure each unit matched the others. After the difficulty shown in completing the task in house, it was determined to bring in Michael Roberts with MRSafety LLC.

The task was developed in the following five phases:

Phase One was to finalize the outcomes and seek a common numbering system for everything in the plant.

Phase Two was a thorough and careful examination of the facility and each confined space already identified and then to identify any space missed. The locations were documented and numbers assigned to each confined space. Stainless-steel signs were specified for areas with high heat or sun exposure; hard plastic for areas better protected from the elements (Figs 1 and 2). The signs include a printed label with Quick Response (QR) codes. 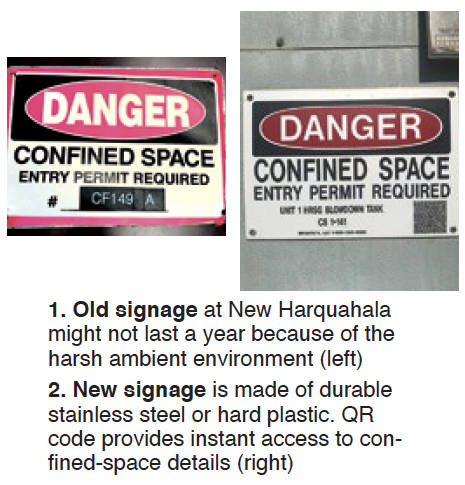 Phase Three was to affix the signs around the facility and to provide a data sheet that could be entered into Tag Links. This would include a comprehensive notebook (electronic and paper copy) of all the confined spaces at the facility.

Phase Four was for Harquahala staff to pull all the existing photos of the confined spaces and available information into a usable product.

Phase Five was to provide new drawings identifying all confined spaces on unit and site drawings.

Results. Revamp of the confined-spaces portfolio created a better system, one much easier to identify the confined space and the associated hazards. The identification numbering system was redone so that each unit’s identical confined spaces now match from unit to unit.

Signs were printed on the metal backing to ensure they would withstand the Arizona sun and heat through more than a year or two, making it easy for all to identify the confined space. Signs include the appropriate QR code, helping employees and entrants be better prepared for the hazards they might encounter upon entering the confined space.

The QR code was a major reason for using MRSafety’s services. Instead of remembering which confined space is being used, then searching through the records to find the necessary information, and then printing that information, now, the information is provided quickly and efficiently using the QR Reader app.