In 2011, a large generating company experienced unplanned outages at two of its powerplants when a generator step-up unit (GSU) failed unexpectedly because of bushing problems. The loss of generating capacity, the cost of replacement, and the fear that other units might be at risk made it clear to the company that it needed to get a better handle on its transformers and their health.

In response, the power producer created an enterprise-level Transformer Program. In operation for little more than a year, the program has already identified eight critical problems and estimates are that it has avoided more than $6 million in replacement/outage costs (Fig 1). 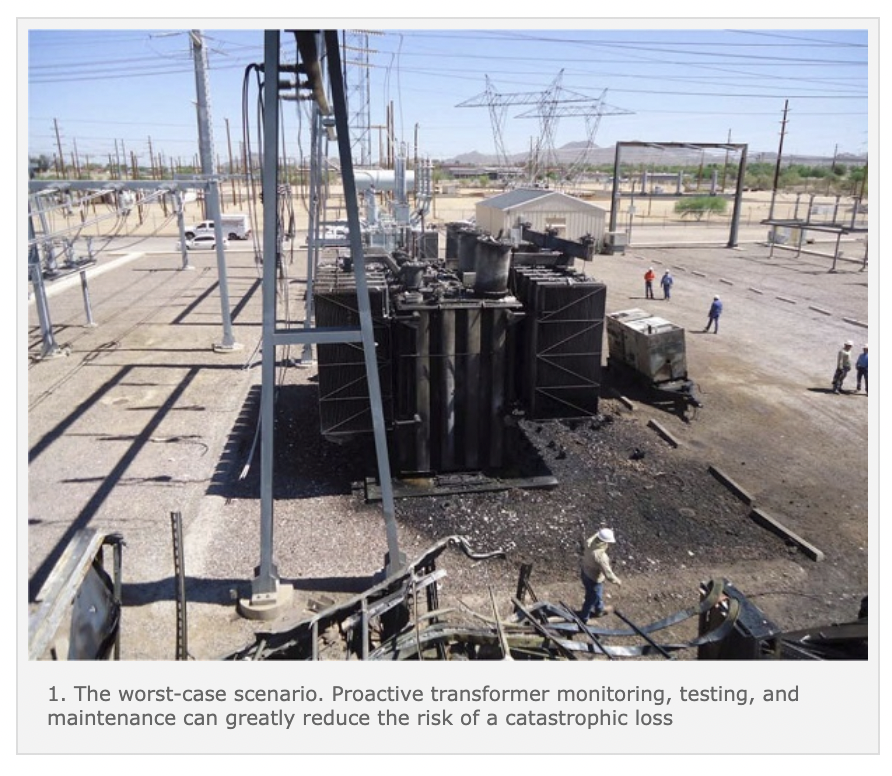 Create a solution. The generating company owns and operates a large fleet of combined-cycle and cogeneration plants in the US. There are more than 600 transformers at its facilities. Of those, about 200 are large GSUs. The remainder includes everything from small station service transformers (500 kVA) to large startup transformers (700 MVA).

This piecemeal approach to transformer monitoring was insufficient in several ways. “There was no consistency in the testing. A powerplant might hire a different test company each year. And, while the testing companies were providing data, they often did not interpret or explain what the results meant. Also, test results were typically delivered on paper and there was no mechanism to compare year-to-year results to look for trends,” explains the manager.

The Transformer Program provides comprehensive testing, monitoring, maintenance, and repairs. Its goals are to:

The power generator initially hoped to hire one firm to take care of all transformer needs, from cradle to grave, but no single vendor could meet the requirements. In the end, it hired R B Watkins, an Alstom company based in Stow, Ohio, to do the electrical testing, SD Myers Inc, Tallmadge, Ohio, for oil analysis, and Doble Engineering Co, Watertown, Mass, for overall health evaluations and repairs.

While still a work-in-progress, the program already is paying off: Eight critical problems have been identified. “Three problems were identified by Alstom, while technicians were performing electrical tests or visual inspections. The other five were detected by SD Myers through oil analysis. Since the program began, the estimated savings (cost avoidance) is about $6 million,” says the program manager.

Spares: What, where, and how to move them

Even with the best monitoring program, the generating company recognizes that it will need to replace a transformer from time to time. So careful consideration is given to how many spare units are needed, where they should be stored, in what condition (assembled with oil, or not), how they should be shipped, and installed, etc.

How many and what sizes? The lead time for ordering and receiving a new GSU is between 12 and 14 months. Therefore, if a GSU fails, the company needs to have a spare unit on hand to install or risk losing generation capacity at a plant for a significant period of time. To prevent this from happening, the transformer program team located and identified critical spares. In 2012, these transformers could cover failures for about 40% of the fleet.

The company evaluated the situation and began acquiring additional units, trying to choose transformers that could be used in multiple locations, where possible. In the last two years, seven spare GSUs were added and arrangements were made to rent other units in the event of a failure. By July 2013, spares coverage had risen to 92% of the fleet.

Stored where? Assembled or not? Some spare units are stored at powerplants. Many are centrally located so they can be shipped to any plant that needs them. Some are stored at the facility of the heavy-hauler that has the contract to move the units.

A big decision is how to store the spare transformers. If they are completely assembled and filled with oil, it will take some time to drain them, take them apart, and package everything for transport. On the other hand, if the spare unit is not filled with oil, moisture ingress becomes a concern. Also, by keeping the radiators, bushings, and miscellaneous parts in boxes, it becomes more likely that something will be misplaced or “borrowed” for another project.

To address these concerns, the company decided to maintain its spare units fully assembled and filled with oil. This will increase the time required to move and install the unit, but putting a large transformer in service takes about a month anyway. The additional time is not considered an undue burden. Alstom is under contract disassemble transformers as necessary and install them where needed.

Shipping. The company has made arrangements with several heavy-haul companies across the country to handle shipping. The haulers develop plans to move the transformers, which can be complicated. While many units can be transported most of the way by rail car, some will have to be shipped by truck across state lines, requiring multiple permits (Fig A). 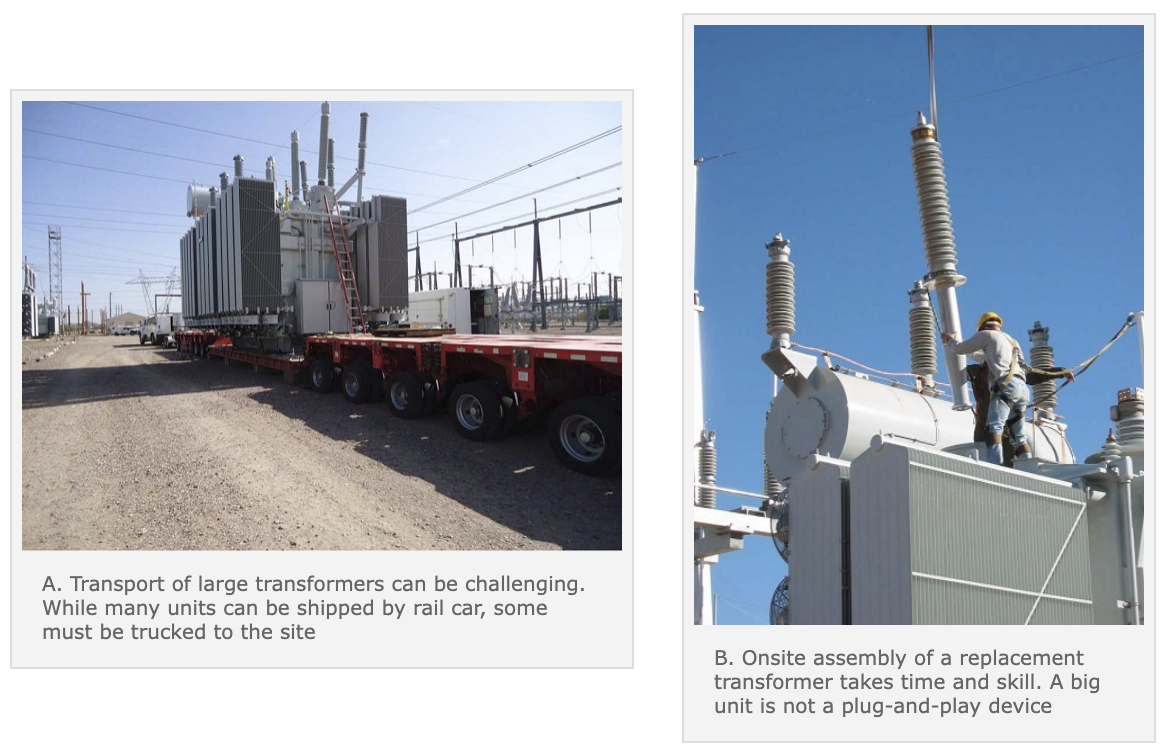 The Transformer Program manager explains, “We try to take care of all the arrangements ahead of time and we update the plans regularly. With any heavy-haul plan, so many things can change. For example, a two-lane highway used to run in front of one of our powerplants. It is now a multiple-lane freeway. Getting a heavy hauler in there 20 years ago was one thing. Now it’s something else entirely.”

Installation. Once the transformer gets to the site, Alstom engineers and technicians are responsible for the assembly. “A lot of plant managers think that it’s a plug-and-play situation. Well, not quite (Fig B). And, they don’t understand why they can’t energize the unit as soon as it is filled with oil. There is a process that has to be followed. It takes time to install a large transformer,” cautions the manager.

Oil testing of all transformers is done at least annually. Some of the GSUs are tested quarterly and, if there are concerns about any unit, it will be tested more frequently. All oil testing in the US is performed by SD Myers at its Ohio facility.

According to Craig Schley, business development leader, SD Myers has been working with the generating company for nearly a decade, running tests for individual plants. The first thing SD Myers did after getting the national contract was to create a standardized testing program. “We have 34 field technicians in different locations throughout the country. They draw a fluid sample from each transformer, which is tested for the typical things, like combustible gasses. While at the powerplant, the technicians also perform a field inspection, looking for oil leaks, bad grounds, cracked bushings, etc.” Note that while all the GSUs are oil-filled, some of the smaller in-plant transformers contain other insulating fluids, like FR3.

The oil is analyzed, and under the contract, turnaround is guaranteed to be less than five days. The results are reviewed by experts at SD Myers and the information is entered into a “dashboard” so engineers for the generating company can conveniently access the data, as soon as possible.

Schley explains what happens next: “If there are no problems, we send a notification, to let them know that their test results are available. If we find a minor problem, we will send a service alert to the plant and to the Transformer Program manager, to let them know there is something going on and the transformer might need to be serviced. If we find something serious, like acetylene, we send a critical alert. That goes directly to corporate.”

Besides providing test results through its dashboard, SD Myers also sends data to Doble in a standardized format, depositing them in a digital “drop-box.” Doble then adds the new data to a master database, which it maintains. The oil testing program is definitely improving the condition of the transformers. Schley says, “Here’s the best way I can put it: Nine years ago, when we started serving plants on an individual basis, there were a lot of critical alerts. Today, problems don’t reach a critical level very often.

Electrical testing. “Two years ago, the generating company didn’t have a comprehensive electrical testing program and they were having some failures. While each plant had a preferred transformer shop that it used, testing wasn’t consistent and neither were the results,” says Wes Watkins, Alstom’s regional service manager. The transformers now are tested regularly. How often, depends on operating schedules, but typically every two years for the GSUs.

“Since the electrical tests are performed when a transformer is de-energized, we have to work around the outage schedule and that varies from plant to plant. Some plants might only have a three- or four-day outage, while others might be down for 30 days. I let the powerplants know which transformers are slated to be tested in a given year and they let me know on what dates I can have access to those transformers,” continues Watkins.

Alstom has trained technicians throughout the US. They run the typical electrical tests: power factor, excitation, winding resistance, TTR on the in-service tap, megger the windings, etc. The technicians also do a comprehensive visual inspection and test all the gauges, alarms, fans, etc (Fig 2). 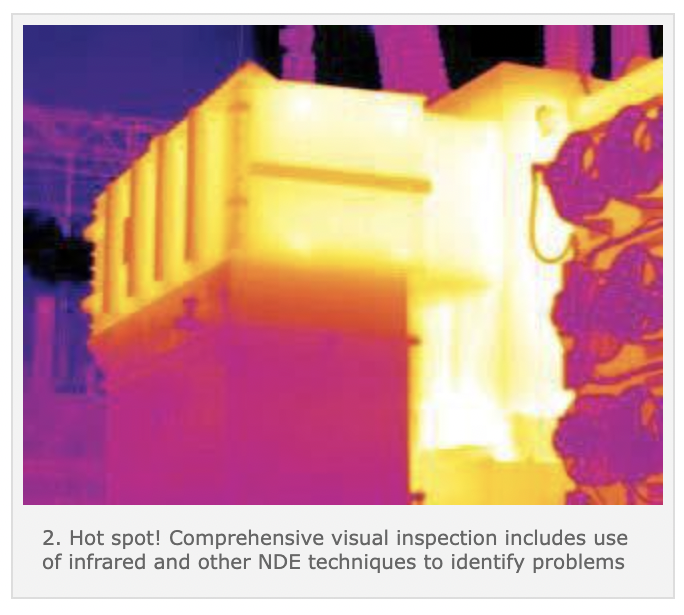 Once the inspections and tests are complete, Alstom design engineers review the data. If something looks amiss, they inform the program manager. Then, all the data are put into an XML file and sent to the generating company, which forwards it to the drop-box at Doble. Alstom’s inspections have identified several critical problems and many non-critical issues; all were quickly addressed.

Overall trending and analysis. “It’s one thing to test transformers and collect the data, but for that information to be valuable, it has to be analyzed. Doble has a multidisciplinary group of chemists and engineers to do that,” points out Paul Griffin, VP of consulting and testing services.

All the test data from SD Myers and Alstom are sent to and analyzed by Doble. The drop-box simplifies the process. “Transferring large data files can be a challenge, so we set up this system. Testing companies can drop the information into a virtual box, which we check daily and load into our system,” explains Griffin.

Doble does a full review of all that data on each GSU transformer (electrical, oil analysis, visual inspection, historical) and gives each unit a ranking. The color coded ranks start at “0” for “missing data.” A rank of “1” means “unacceptable” and the numbers continue up to “5,” for “in excellent condition.” The rankings are provided online and give an overall assessment of each transformer. With a few mouse clicks, an executive or engineer can drill down further into the data and get more detailed information.

If there is a problem, Doble might recommend additional tests to aid with a diagnosis. For example, if the dissolved gas analysis showed there was a lot of hydrogen and a little bit of acetylene, an acoustical test to locate partial discharge activity might be needed. Specialty testing is arranged for by Doble.

By having all the data available, Doble experts can watch for problems and for trends. “In order to make sense out of data, you have to look at the recent information but, in some situations, you also want to compare that to the nameplate data. So, you are really looking at the whole story of each transformer,” says Griffin.

The program is working and similar programs will probably become more common, according to Griffin. “I think you’ll be seeing a lot more of this in the future, for two reasons. First, generation companies are getting larger and they need to understand the condition of their assets. Second, I know it’s a common refrain, but the average age of transformers in the US is getting older every year. So, condition assessments are going to be more and more important.” CCJ