A typical F-class compressor ingests nearly 1000 lb/sec of air containing a spectrum of minerals, salts, and volatile organic compounds present in the ambient atmosphere. Locally high concentrations of corrosive compounds also may exist because of surrounding industries—or even from the powerplant itself, such as cooling-tower drift or water treatment effluent.

Gas-turbine owner/operators are well aware that airborne contaminants foul compressor blades and vanes, reducing efficiency. But they may not know that contaminants also can serve as nucleation sites for under-deposit corrosion cells, which can have dramatic implications for component life, including increased risk of catastrophic failure (Fig 1).

Online and offline compressor water washing with detergents has been used with some success by GT operators to mitigate the effects of deposit accumulation. However, tenacious deposits invariably accumulate over time. Activation of these deposits, by the presence of moisture, is conducive to the formation of corrosion cells that can quickly corrode the types of stainless steels typically used in making airfoils. 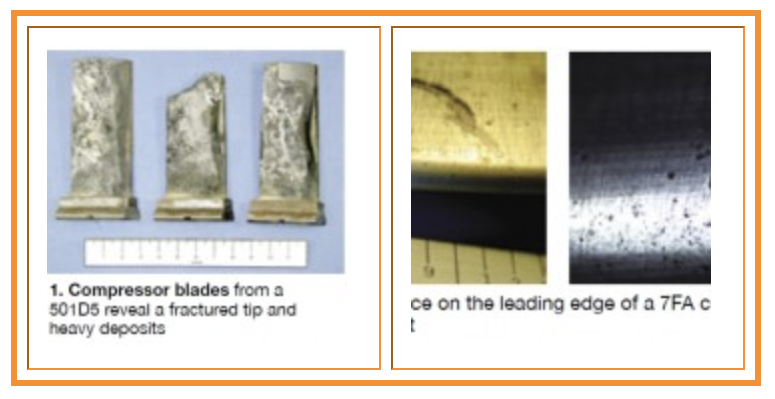 Observations by
M&M Engineering engineers and metallurgists include a combination of leading-edge erosion and pitting in the first few compressor stages of some machines. While erosion is most often the result of online water washing, it also can be caused by ineffective filtration of inlet air attributed to poor filter selection, poor condition of filter media, and/or bypassing of filter elements. Important to note is that an eroded leading edge is an ideal location for compressor deposits to become deeply embedded.High-strength precipitation-hardening (PH) stainless-steel blades and vanes suffer a particularly high loss in fatigue threshold properties from pitting. They are more prone than some alternative materials to suffer airfoil liberation caused by cracking nucleated at pitting.

Given the drop in compressor efficiency, the irreversible damage caused by erosion and corrosion pitting (Figs 2 and 3), and the risk of catastrophic damage from fracture initiation at corrosion pits, it is in your best interest to have a mitigation strategy for compressor deposit accumulation. Moreover, the strategy selected should consider a scenario where some accumulation is unavoidable and how to reduce the activation of these deposits.

Finally, particular attention should be paid to units with a history of blade failures attributed to a design limitation that makes them more susceptible to corrosion fatigue cracking. Such units would have a very low tolerance to the presence of corrosion pitting.

Soil. Depending on local geological conditions, any given soil can contain large amounts of calcium, iron, magnesium, aluminum, potassium, sodium, phosphorus, and sulfur. There are other less-common species as well—including chlorides, where dry land used to be a sea bed. These elements always are present in compound form, such as an oxide or salt.

Even with reasonably high-efficiency filtration capable of removing 99.7% of the particulates within a given particle size range, the remaining 0.3% contamination multiplied by 1000 lb/sec of influent air is conducive to a high rate of deposit accumulation.

Chlorides in salts will rapidly corrode (pit) all of the stainless steels used in GT compressors (Figs 4 and 5). The only class of materials reasonably immune to chloride or under-deposit corrosion is the titanium alloy blades and vanes used in flight turbines and possibly some land-based aeroderivative units. Sulfur-containing compounds are commonly found on compressor airfoils, but also have been identified in larger quantities in cracks on Inconel 706 turbine wheels used on F-class units.

Air. The quality of air entering the compressor is highly variable, but nevertheless dependent on geographic location. Coastal regions present an obvious problem with their humid, chlorides-laden atmosphere. Units in such areas are especially vulnerable to pitting. Special inlet ducting and tailored filtration may provide some level of protection.

Plants with wet cooling towers may present similar problems—particularly when GT inlets are located downwind of towers. Also, use of sodium hypochlorite for microbial control of tower water can allow chlorine-laden air to enter the compressor. The solution here may be as simple as using a non-chloride-based biocide of microbial control. In some cases, the corrodents can come from atypical activities at the plant—such as excursions of acid vapors from water treatment facilities (sulfuric or hydrochloric acid).

Close proximity to local industry—such as steel mills, coal- or lignite-fired boilers, or refineries—can result in a large influent concentrations of sulfur-bearing compounds, which when incorporated into a deposit layer, can accelerate under-deposit corrosion and pitting.

Power augmentation by closed-loop chiller system also affords the opportunity for contamination should leaks develop in the chilled-fluid circuit. These fluids can have variable water quality as well as chemicals added to the chiller loop. Non-volatile constituents of the chilled water would leave deposits similar to those from hard water. As mentioned earlier, online water washing can cause leading-edge erosion if the droplet size is not controlled, of if leaking occurs during operation (Fig 6).Water. The water source used for online and offline water washing, as well as the water used for power augmentation, should be of demineralized quality or better. The use of city water or another source of hard water is discouraged. Online water washing with a hard water source will increase deposit accumulation at and beyond the phase transition area, where the water boils to vapor and deposits the minerals in solution.

M&M Engineering has for many years sampled the deposits removed from GT compressor airfoils in many geographic regions of the world. A pattern of contaminants (the usual suspects) has been observed, with some exceptions. The deposits observed are biased largely by one of the dominant contributors—that is, coastal conditions, soil condition, or local environment.

Most OEMs and some independent service providers perform replications of leading-edge erosion and pitting. Users should be aware that given the typical undercut pitting morphology observed on most blade pits, a large portion of the pit will not be captured in a replication.

This method of examination and evaluation accurately reflects broad surface pitting, but not undercut pits. Reason: Impression media typically does not flow into undercut pits. Even if it did, it likely would break off and remain in the pit when the impression media is peeled from the blade airfoil surface.

Moreover, pits often are packed full with compressor deposits and corrosion byproducts, again resulting in vastly underestimated pit depth. Finally, an indication replicated by a mold will not be able to differentiate between pits caused by corrosion (deep and undercut) and those from foreign object damage (small particles that leave divots on the leading edge of the blade). This requires a trained eye during a visual inspection. The result of the foregoing is that the depth of attack will be underestimated.

A better method is simply magnified photographic documentation where the “black dots” on the blades are confirmed to be pits. A safe assumption is that the pit is at least as deep as it is wide.

Recall that the source of the corrodents can be local to the plant, in the soil, from the atmosphere, or from local industry. In some cases, the corrodents can come from atypical activities at the plant—such as the use of sodium hypochlorite (bleach) for biological control, or excursions of acid vapors from the water treatment facilities. Plant operations can identify, address, and mitigate the local sources.

Regarding low-fired-hours units, life-limiting pitting is difficult to understand without considering the effect of offline corrosion. For cycling units, a substantial amount of time is spent waiting for the call to start (refer to 7EA experience, p 76). During idle periods, the unit typically is on turning gear a large portion of the time and there may not be provision for supplying dry air. This is when corrosive deposits combine with moisture to create conditions ideal for pitting—particularly if the deposits contain a substantial concentration of sulfur- and chlorine-containing compounds.

Units may be water washed online without detergent each day they are operated when ambient temperature is higher than about 50F. Offline washing with detergent usually is performed prior to performance testing or to restore lost capacity. Compressors typically are washed offline from one to four times a year depending on air quality and other factors. Both methods of washing provide performance benefits and help prevent the accumulation of corrosive deposits (also known as crud).

However, performing an online wash prior to operation does not remove the deposits that would be accumulated during the subsequent operating cycle, nor does it remove much crud beyond the first several stages of the compressor because of the phase transition from liquid to vapor.

Moreover, if the subsequent operation cycle is followed by a long idle period in cool, humid weather, the deposits can absorb the ambient moisture and activate the corrodents. Ideally, the online wash should be performed near the end of the cycle, but with sufficient time to ensure proper drying of the compressor and residual, tenacious deposits.

Offline washes should be done with demineralized water and a cleaning solution tailored to the deposits. Proper rinses with conductivity measurements taken at the drain ports are advised. Offline washing is much more effective at removing accumulated deposits, but proper drying is necessary to prevent pitting under any remaining crud.

An aspect of GT O&M critical to minimizing deposits and moisture infiltration is proper sealing of the inlet filter house. All seams should be sealed with a weatherproof material and the fitment surfaces should be in good condition. Water leaks from the roof or any other area that causes standing water should be addressed.

Susceptibility to deposit accumulation can be minimized by use of high-efficiency filtration media and aggressive offline washing with a proper cleaning solution. To minimize the presence of water, washing should be followed by operation until all moisture is evaporated. Use of appropriate weather protection and mist eliminators on the air inlet house, as well as filter elements capable of removing moisture, also are suggested.

Finally, layup periods should be combined with closure of the bellmouth area and with a source of dry air (heater or dehumidifier) to ensure corrosive deposits are not activated. Stack dampers are beneficial as well, reducing the ingress of moisture into the gas turbine. CCJ