Dean Motl called about the time of the spring equinox to say New Harquahala, the plant he manages, was inspecting P91 piping and found some off-spec material that he thought the industry might want to know about (sidebar).

Motl has benefited from collabora­tion with his peers in the 501G Users Group over the years and knows the value of sharing information. He mentioned soft pipe and the use of incorrect filler material on P91 welds as two issues identified. Also, that Maintenance Manager Chris Bates would be attending the upcoming HRSG User’s Group meeting (held April 12-14 in Jacksonville) and suggested that the edi­tors meet with him to dig into some of the details. They did. Bates worked for a mechanical contractor when he learned first-hand about some of the problems asso­ciated with P91 – such as pipe cracking. He added to knowledge acquired on the job by speaking with industry colleagues and by attending HRSG User’s Group meet­ings.

When Bates transitioned from the mechanical con­tractor to New Harquahala a couple of years ago, one of the first things he did was ask questions concerning the paper trail on the plant’s P91. His experience suggested materials specs, heat-treat­ment reports, weld inspection reports, etc, often went miss­ing. Another thing he had learned: A significant level of expertise was required to plan and conduct the proper met­allurgical inspections and to analyze the data collected.

Some critical data needed to certify New Harquahala’s P91 piping as “meets today’s industry quality standards” was not available – just as Bates had thought. He champi­oned the idea of conducting a com­prehensive inspection program with the hope of recertifying the material installed.

Gaining experience in P91 inspec­tion and analysis, and in developing inspection and testing guidelines, also would help others. NAES Corp, Issaquah, Wash, the plant’s contract operator and Bates’ employer, had perhaps another hundred plants under management that might also benefit from the lessons learned.

Due diligence of possible contrac­tors for planning and conducting the requisite inspections and for analyz­ing the data pointed to Structural Integrity Associates Inc (SI, San Jose, Calif) as a compa­ny with significant and rele­vant P91 experience. SI was on NAES’s preferred vendor list and had done work at other plants the company manages so the decision to hire this consultant was rel­atively easy.

The editors also were familiar with SI’s work in the field having attended one of the company’s P91 workshops a couple of years ago. However, just how the firm acquired its exper­tise was an unknown until Fred DeGrooth and Steve Gressler, both of whom were involved in the New Harqua­hala project, offered the fol­lowing backgrounder:

Another client, having suffered a fire at one of its plants, called in SI to see if the heat had adversely impact­ed the material. The firm again found off-spec material, but determined that the P91 softness (an indicator of substandard material) could not have been caused by the fire.

Not accepting the two findings of softness “a coincidence,” metallur­gists immediately began developing an aggressive program to learn more about P91’s behavior and how to reli­ably and accurately identify material of poor quality. SI moved quickly to find any problems before warranties ran out.

Gressler said that an initial step in current P91 evaluation programs is to screen out the bad material. Specifically, eliminate the outliers – material that clearly has dimin­ished properties. The current range of acceptable hardness for parent metal is 190 to 280 HB (Hardness, Brinell), he added, noting that the upper and lower limits have evolved over time. Weld hardness can be higher.

Hardness is only used for screen­ing, Gressler continued. “Hardness by itself doesn’t determine mate­rial health, it’s merely an indica­tor.” Hardness doesn’t tell you when you’re going to have a problem and in that regard it’s much like your cho­lesterol level.

A baseline inspection is all-impor­tant. You must have current mate­rial properties to determine both a corrective course of action and how quickly the work must be done. But inspection is not as easy as it might appear.

Knowing where to take the hard­ness measurements is an art, Gressler said, and data collection an iterative process. If you find some soft materi­al, he added, you have to go back and take more measurements to see how large the affected area is, and how deep (Fig 1). Sometimes the softness is just at the surface in the decarbur­ized layer and the base material is satisfactory.

New Harquahala’s strategy was to conduct its baseline inspec­tion over a five-year period so most of the work could be done during regu­lar planned outages and the project would have a manageable impact on the plant’s balance sheet. Bates said inspections focus on the high-pressure (HP) steam system from the heat-recovery steam generator to the steam turbine, and the hot-reheat (HRH) system from the HRSG reheater outlet to the inlet of the intermediate-pressure (IP) turbine section. All available drawings and materials and fabrication records for those systems were retrieved by plant personnel before SI began work.

An important step in the process was to prioritize which welds, fit­tings, and sections of pipe would be checked first, second, third, etc. SI prioritizes inspections based on a detailed review of plant design, procurement, and erection, using a method similar to the company’s Vindex™ method developed for low­er-alloy piping. The Vulnerability Index is a semi-quantitative damage-ranking methodology that considers both inspection history and compo­nent characteristics. The damage consequences considered in Vindex methodology consist of safety and/or lost genera­tion.

First year’s work. Inspections of New Har­quahala piping spools and girth welds assigned Prior­ity I status are scheduled for completion in 2010. Unit 2 was inspected early this year during a 45-day outage that included major compressor work. Next came Unit 1; work was complet­ed during a 15-day outage scheduled for other purposes.

Some inspections have been done on Unit 3; remainder should be com­pleted by year-end. Only about 10% of the piping in the HP and HRH systems was classified Priority I. Pri­ority II and III each total about 30% of the P91; Priority IV represents the remainder.

Bates told the editors that the demanding Unit 2 outage absorbed all of the plant’s available manpow­er, leaving no one to work alongside SI on the metal­lurgical evaluation.

NAES considers the cen­tral engineering support it provides plant O&M teams a competitive advantage in business dealings. For the New Har­quahala P91 evaluation, the compa­ny assigned Nancy Armstrong, a staff metallurgist located at corporate headquarters, to the plant for several weeks. That was an important move.

One reason: Armstrong’s experi­ence. She has a solid background in the design of piping and pipe-support systems from her days as a com­ponent engineer at Ontario Power Generation Inc’s Pickering Nuclear Generating Station.

Another: Some inspection results were surprising and the knowledge Armstrong gained on the project enabled her to develop a set of best-practices guidelines on P91 inspec­tion and testing to assist other plants in the NAES family. 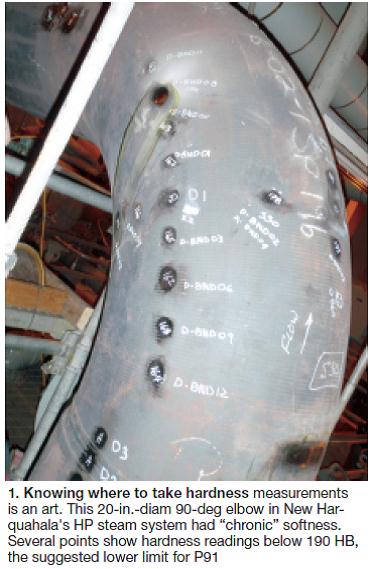 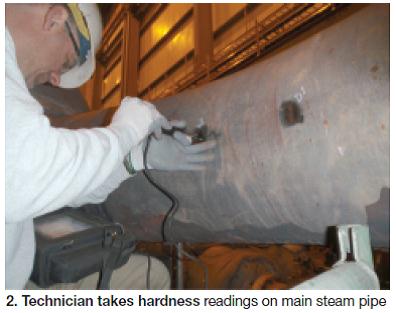 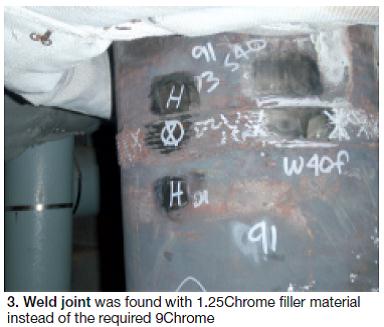 Positive material identification (PMI) and hardness tests were conducted on four HP steam and four HRH components and their respective girth welds. Low hardness values – approximately 170 HB – were found on two 90-deg bends and one tee on the HRH line (Fig 2). These anoma­lies suggested that in-depth testing was warranted.Unit 2, Phase I results

Metallurgical replicas were taken at representative test points and sent to SI’s Material Science Center in Austin, Tex. If analysis confirms the suspicion of metallurgists that the material has an improper micro­structure – and by extension, reduced creep strength – further evaluation will be required.

This might include one or more of the following:

DeGrooth and Gressler paused to stress the importance of proper microstructure in minimizing creep damage. They said that all materi­als suffer from creep in high-tem­perature environments, adding that creep-induced cracking of P91 has been found at several plants in the US and UK.

P91 accumulates creep and fatigue damage much like the older P22, which is more familiar to powerplant owner/operators. But because P91 piping has a thinner wall than P22 for equivalent service conditions it is less prone to thermal strains caused by temperature variations over time. Gressler said that an operating tem­perature of only 20 deg F above the design point can reduce material life by half.

You may wonder why PMI testing is necessary. Perhaps you even think that it’s make-work for the consult­ing team. Consider this: Even if when all necessary drawings and materials certifications are avail­able, do you really know if all the inspections that should have been done during construction (both at fabrication shops and in the field) actually were done, and how well they were done? Paranoia? Possibly. But lives may be at risk so you can’t afford to skip PMI in the inspection process.

SI’s work at New Harquahala uncovered low-alloy filler material in a critical weld in Unit 2’s HP steam system (Fig 3). Then metallurgists found the same material in the same weld on both Units 1 and 3. Clearly, this was unexpected and of great con­cern. You can ask yourself, “Why did this happen? How did this happen?” But you’ll probably never know, and the only question that really matters is “How can we correct the situation, and how quickly must we react?”

The weld repair was not straight-forward because of the difficult location and the different sources of P91 material for the transition piece and the valve body. Regarding the latter, the valve, fabricated to Euro­pean code standards, was tempered at a lower temperature than that used to temper P91 piping.

Documentation provided by Sie­mens Energy, which supplied the steam turbines as well as the gas tur­bines, indicated that for welds requir­ing heat treatment, the temperature range must be between 9 and 45 deg F below the last tempering tempera­ture of the valve body: 1346F.

Industry experience indicates that exceeding the temperature can dam­age the base material during post-weld heat treatment (PWHT). How­ever, the Siemens requirement is not consistent with guidelines presented in Section I of the 2009b ASME Boil­er and Pressure Vessel Code, table PW-39, which recommends 1375F. But it does conform to the current version of ASME’s B31.1 Power Pip­ing Code.

SI’s position was that the lower PWHT was acceptable but would require a significantly longer time at that temperature than it would at the higher temperature – specifically nine and a half hours at 1346F ver­sus four hours at 1375F. Both the consultant and the plant thought this a reason­able compromise for achiev­ing the required hardness while satisfying the Siemens request.

Hardness tests indicated a successful weld repair. All Brinell values were between 180 and 280 and full trans­formation to the desired tem­pered martensitic structure was achieved. More welcome news: There was no damage to the valve. Some soften­ing of the pipe base metal occurred, mostly unavoid­able given the extended PWHT soak time.

What might have been. Had the out-of-spec weld not been identified and repaired in a timely manner, failure was highly likely. What often occurs over time when materials of different chromium content are welded together: Cracks initiate and propagate through the carbon-depleted zone that forms during the welding process. 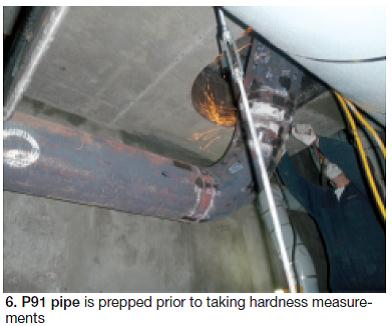 The “P91 Inspection and Testing Guidelines” prepared by Armstrong, based in large part on the New Har­quahala experience, provides per­sonnel at other plants managed by NAES a foundation in best practices for evaluating the metallurgical con­dition of material installed and for correcting deficiencies.P91 guidelines

The process suggested in the guidelines essentially follows the same path as that described above for New Harquahala:

1. Never conduct tests when a unit is running.

2. Make sure the steam supply system is isolated according to LOTO procedures.

3. Do not test piping when its temperature exceeds 100F and/or line pressure is greater than 2 psig.

Once all the inspection data are collected and analyzed, Armstrong suggested development of a detailed plan both for future inspections and evaluations and for needed piping modifications. Other sections of the report detailed requirements and procedures for heat treatment, weld­ing, and record-keeping. ccj