Saying that wind energy is becoming victim to market forces may appear oxymoronic, because the industry is supported by state renewable portfolio standards (RPS), the federal production tax credit (PTC), the Federal Energy Regulatory Commission (FERC) new Order 1000, and various other loans and subsidies that flowed through the American Reinvestment and Recovery Act (ARRA) and other loan guarantee programs.

But having all of that support can’t counter the price trends for natural gas, the lack of need for capacity additions, the difficulties in expanding transmission to connect wind facilities to load centers, the lack of a national carbon policy, and grid integration costs that more and more may become the economic burden of wind facilities rather than socialized through lack of transparency of these costs in consumer rates.

If this makes wind enthusiasts feel particularly vulnerable, it shouldn’t. Virtually all other capacity options are being challenged by natural gas price trends reflecting the U.S. “shale gas revolution.” Not only is gas likely to win most economic evaluations for new capacity, but gas-fired plants stand to reap big dividends from wind energy integration.

Wind is “out of the market” on an unsubsidized basis everywhere except the upper Midwest, according to EPRI officials, despite the 33% drop in capital costs since 2008. The market is driven by the RPS, but wind is not deployed at a market price. Capacity factors for wind energy facilities vary from 28% to 40%, leading to a factor of two difference in operating costs among facilities.

Costs for wind integration range from 0 to $5.63/MWh, based on EPRI’s synthesis of evaluations from the US and Europe. Keep in mind that these costs reflect only the grid operating flexibility necessary to balance the variability and uncertainty of wind energy, not the cost to deliver wind energy to the grid.

The goal of advanced wind energy R&D is “grid parity with other resources,” notes EPRI officials. Yet grid parity is a long way off. Assuming consistent support for the RD&D steps EPRI outlines, the earliest wind energy will be competitive without subsidies is 2030, and perhaps as late as 2050, based on EPRI’s forecasts. The analysis in the support documents notes that this is a comparison of wind with other “non-emitting generation options.” The key thrust of the EPRI briefing was to suggest that more aggressive wind energy RD&D will be necessary, especially if wind starts to lose some of the subsidies and mandates it has enjoyed over the last 20 years.

Many of these subsidies are being challenged in the political arena. And, almost every state RPS includes a caveat that RPS goals could be delayed or removed under poor economic conditions. Most of the country is currently suffering from a protracted economic malaise, which has caused electricity demand destruction and made new classes of voters skeptical about subsidizing one option over another.

The challenge for wind, or any other option, to compete against gas is starkly revealed in Tables 1 and 2, which show EPRI’s forecasts for the levelized cost of electricity (LCOE) for several generation alternatives. Carbon cap and trade, or other national carbon policy or tax, is off the table politically for a while. And it’s a pretty sure bet that no off-shore wind turbines will be operating, since none have yet to be permitted. 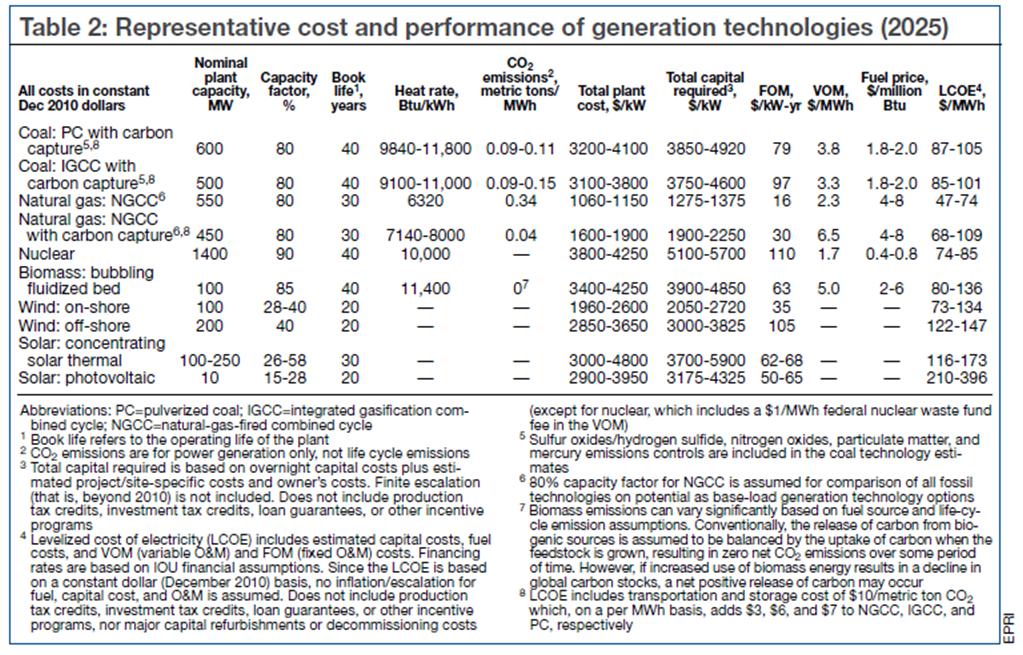 Therefore, the relevant comparison is a gas-fired combined cycle without carbon capture against on-shore wind. The top of the gas option’s LCOE range is the bottom of the wind energy option LCOE. When you consider that on-shore wind, under the best conditions, is capable of a capacity factor only half that of a gas-fired plant, the overall cost of ownership is actually quite worse.

While R&D can lower the costs of wind energy, the EPRI team pointed out that the technologies wind competes against don’t stand still, that there are advances, for example, in gas turbine and shale gas extraction technologies coming in parallel (Table 3). While it is true that the fuel is “free” with wind energy, the strength of the resource varies dramatically depending on location.

Anyone familiar with recent history in the power industry knows that gas prices can escalate in a relatively little time. However, what is not widely known is that the delivered price of natural gas is now “independent of geography,” according to the EPRI documentation, thanks to an “unprecedented expansion of the transmission pipeline network.”

In the short term, wind energy integration is a “win” for gas. EPRI’s modeling work shows that large-scale wind deployment will be accompanied by substantial additions of gas-fired capacity both to meet ramping requirements and hold reliability, increasing delivered COE. This is already playing out in California. The state is pursuing a 33% RPS by 2020, and the current governor has stated he considers that a “floor” not a “ceiling.”

One utility in the southern part of the state has stated in public documents that it is purchasing $750 million of gas-fired assets. And while new, flexible gas turbines are being made available for the rapid grid responses induced by wind variability, a parallel challenge is the impact on gas delivery to the powerplant. Access “Integrating Renewables into the Generation Mix,” at www.integrating-renewables.org. 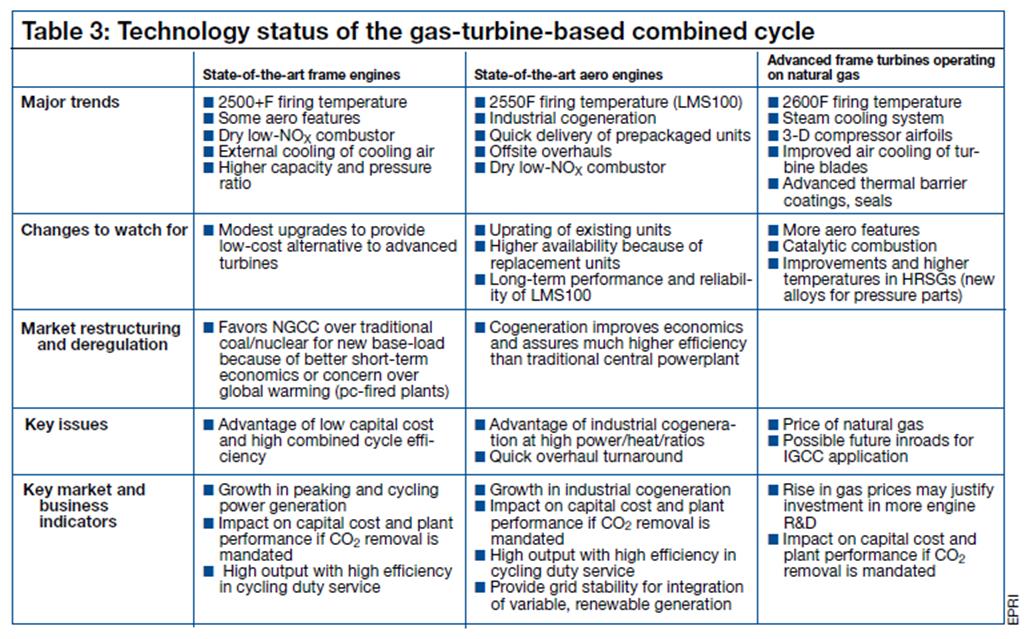 Moving energy to market. Wind integration costs and ecological impacts are important—but the lack of transmission probably holds up more wind projects than anything else, except for the low price of natural gas. EPRI notes that transmission is particularly challenging: “From planning to permitting, from capital cost estimation to cost allocation, there is no clear indication how and whether sufficient transmission will be constructed to tap our vast, remote domestic wind resources.”

Although wind energy is “emissions-free,” it comes with its own environmental constraints and unintended impacts. EPRI officials noted that these constraints are beginning to affect economic viability of projects in some regions.

One of the unintended environmental impacts mentioned is the endangered Indiana bat, which is holding up permits in that state. Protecting bats and other migratory avian species may require facilities to shut down at certain times of the year, further impairing already fragile economics. As if to prove once again that Mother Nature offers no free lunch, most bat fatalities associated with wind turbines occur in late summer and early autumn, during the hot weather when electricity is needed most to meet air conditioning and cooling demand. In an attempt to avoid wholesale shutdowns of wind facilities when operating economics are best, EPRI’s R&D program includes a bat detection and automatic turbine shutdown system. 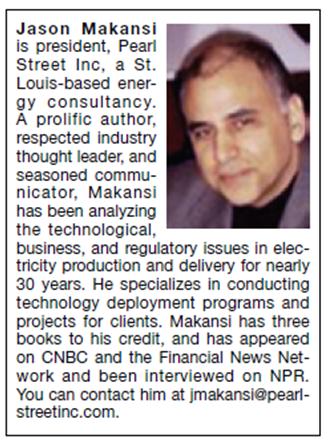 This isn’t to diminish other positive conclusions from EPRI’s work. Example: Although wind farms have substantial land requirements, wind is among the most efficient energy sources from a land use perspective, when all factors are taken into account. Also, wind turbines appear to have minor and localized effects on habitats and species compared with other electricity supply options. Overall, EPRI concludes that “land-based wind resources are sufficient to meet more than 50% of future US electricity needs at a wholesale COE of about $80-90/MWh.”

Role for storage? A compressed air energy storage (CAES) facility is a modified gas-fired power station. The electricity-fed motor drives a compressor to store high-pressure air, usually in an underground cavern. The machine essentially operates in reverse, along with the addition of natural gas, to generate electricity when attractive to do so. Could this technology help integrate wind energy into the grid?

“Yes,” according to EPRI’s analyses, as long as decisions regarding the operation of the storage facility “are based on the aggregated balancing needs of the entire bulk power system for that region.” As a facility dedicated to wind back-up, the answer is “no,” at least up to 10-20% wind penetration. In this regard, CAES with underground cavern storage is a vital technology for grid operation and wind integration because it consistently pencils out as the most cost-effective storage option available, according to an earlier EPRI white paper on energy storage, released last year. CCJ