The sixth annual meeting of the European HRSG Forum (EHF), May 14-16, 2019, Athens, Greece, was a global event with representatives from 17 countries. There were more than two-dozen presentations on the agenda, plus a workshop on water chemistry.

CCJ’s recent report on film-forming substances (FFS), a topic discussed at all recent HRSG conferences, stressed the importance of following the recommendations provided in Section 8 of Technical Guidance Document (TGD) 8-16, published by the International Association for the Properties of Water and Steam (IAPWS), when considering these formulations for use at your plant. Incorrect applications worldwide continue to produce severe complications and damage.

Cycle facts: Feedwater makeup for this plant is provided by a treatment system incorporating reverse osmosis and ion exchange. There is no condensate polisher and the deaerator is bypassed in normal operation. The seawater-cooled condenser is titanium-tubed.

Cycle chemistry evolution. Until 2012, system ammonia was controlled by measuring the specific conductivity of condensate and maintaining a feedwater target pH of 9.8 to 10.0. The plant experienced flow-accelerated corrosion (FAC) issues and iron oxide deposits.

Cycle chemistry was modified in 2012. Trisodium phosphate (TSP) was added to the LP and IP drums; an air bleed to the feedwater (5 to 15 ppb O2) was introduced in 2014. The corrosion and deposit situations improved but remained unsatisfactory to the owner/operator.

During the first half of 2016, TSP was added to the HP drums, but this practice was conducive to severe hideout and discontinued. In mid-2016, Cetamine G851 (oleyl propylenediamine, or OLDA) was added to feedwater at 1.0 to 1.5 mg/l (ppm).

The presenter reviewed monthly data for pH, phosphate, degassed acid conductivity, total iron, and carryover. Total iron in condensate showed a significant drop, as did total iron in LP and IP drums and in average values for both HRSGs (Fig 1). 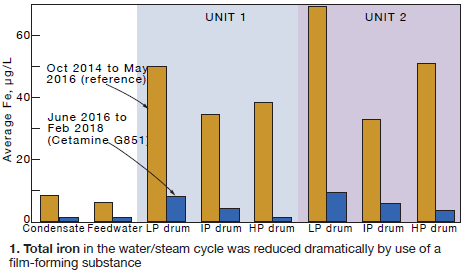 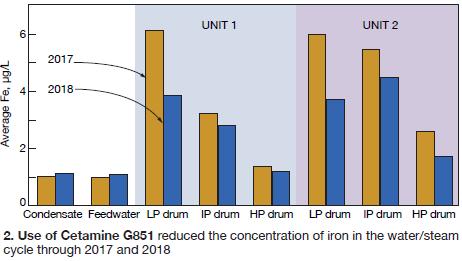 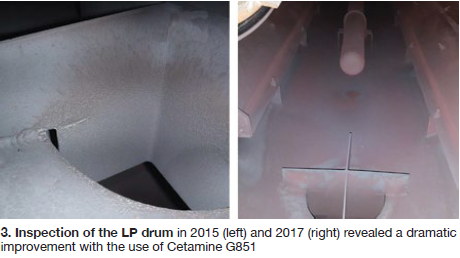 The use of Cetamine G851 had no negative impact on the online analyzers; and, maintenance of CACE (conductivity after cation exchange) monitors became much easier (resin columns visibly cleaner and virtually no iron fouling).

Conclusions for this FFS treatment, applied in adherence to IAPWS guidelines, are the following:

This is an optimistic look at the potential for film-forming substances, but presentations at the HRSG Forum with Bob Anderson and similar events continue to stress the importance of the guidance provided by IAPWS TGD8-16 Section 8.

The ongoing pros and cons of FFS addition for corrosion control will be presented by Dr Barry Dooley of Structural Integrity Associates Inc at the upcoming Water Workshop—an integral part of the HRSG Forum with Bob Anderson, July 20-23, 2020, at the Rosen Shingle Creek, Orlando, Fla.

Finally, the seventh annual meeting of the European HRSG Forum, will be held May 26-28, 2020, at the Hilton Strasbourg (France).