Reliable feedback from the instrumentation was very poor and had caused numerous trips, typically traced to the fire protection system and bearing vibration monitoring. Repairs were complicated and repair times lengthy because multiple circuits shared the conduit. For each repair, technicians would have to pull all circuits from the conduit, often just to repair/replace one failed circuit.Challenge. For years Blackhawk had trouble maintaining electrical integrity of the instrumentation circuitry within the exhaust bearing tunnel of its W501D5A base-load units. The original design featured a single 2-in.-diam conduit that housed circuits for bearing temperature measurement, bearing vibrations on both axes (relative and seismic), and heat detectors serving the fire protection system. It also included conduit cooling, supplied from the PS&G cabinet and regulated with a rotometer.

Solution. Plant personnel developed a plan to separate the circuits, thereby reducing the time to make repairs. Reliability was improved as well, by routing each circuit through its own 0.75-in.-diam flexible conduit with cooling air from a dedicated rotometer (Fig 1). The four circuits were separated as follows: 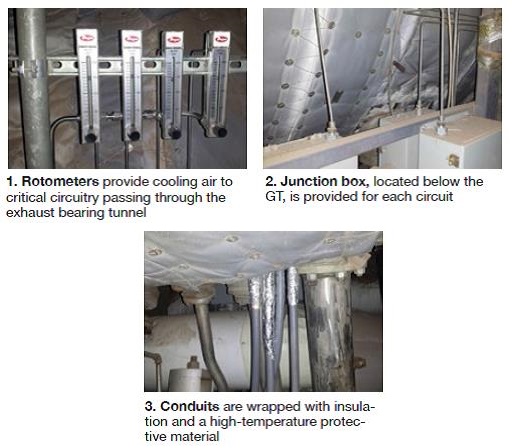 Each circuit now has a sealed and cooled junction box below the GT (Fig 2). The conduits are wrapped with insulation and a high-temperature protective wrap (Fig 3). The termination boxes within the exhaust tunnel at the heat sensors, proximity probes, and at the bearing thermocouple connection, are sealed and a small vent hole was created to allow proper cooling air flow throughout the entire circuitry from beginning to end.

Results. Since this modification was i 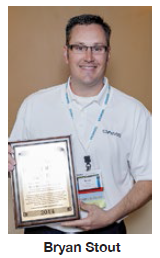 mplemented, the site has maintained 100% electrical integrity on all four circuits within the exhaust bearing tunnel. As an added precaution, rotometer air flow rates are logged each shift on the operator rounds sheet.

Challenge. Blackhawk is equipped with two W501D5A gas turbines. Each has two AC lube-oil pumps and one DC pump. As designed, a GT supplies its own AC power during normal operations. On a unit trip, the GT losses all AC power until the CRO can re-route it through the 4160-V buses. During this time, the GT relies solely on the DC pump to provide adequate oil supply to the bearings.

Solution. Plant personnel developed a plan and completed a Management of Change (MOC) form for a redesign that would provide redundant AC power when a single GT trip occurs. Power would be supplied for the two AC pumps from different 4160-V buses. Each GT supplies its own 4160-V motor control center (MCC, Fig 4). The pumps are now arranged as follows:

To deal with the unlikely possibility that both GTs would be lost at the same time, staff established and implemented a weekly DC lube-oil-pump preventive maintenance program to ensure the integrity of DC lube-oil supply. The program is as follows:

Results. Since this program was implemented, there has been no loss of AC power during a single-unit GT trip. Also, the DC lube-oil system has not failed on a simultaneous trip of both GTs. 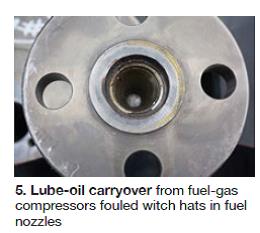 A deposit analysis conducted as part of an in-depth RCA revealed lube-oil as the source of fouling. Staff found fuel-gas compressors were being over-lubricated, causing oil carryover into the fuel. Also, deficiencies in the filtration systems on the gas system were identified. Filter elements were found collapsed, with missing gaskets and fasteners, or with brittle, cracked gaskets preventing them from properly removing the liquids being carried over.

Solution. Lube-oil systems retrofitted at each unit reduced the oil feed to OEM-recommended limits and split the feed into proportions appropriate for the different-size cylinders on each compressor. Filters more appropriate for the facility’s specific application and better gasket materials have been installed. The facility developed maintenance procedures for the proper installation of filter elements in the filtration vessels (scrubbers).

Results. The changes implemented at the facility have resulted in improved availability and significant costs savings from reduced lube-oil usage and filter replacements. Most importantly, the facility has eliminated the extra costs associated with increased replacement of fuel nozzles and have benefitted from the added savings of extending the standard replacement interval rate from 8000 to 12,000 EBH.