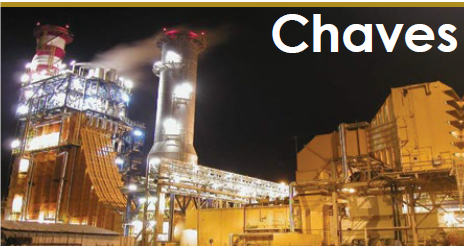 Challenge. A goal of management at the Aureliano Chaves Power Plant was to improve starting reliability and reduce the time to breaker close, both important to the facility’s financial success.

As designed, the plant’s hogging steam-jet ejector was expected to pull vacuum to enable fast starting. However, it took approximately 2.5 hours to reach the desired vacuum. Plus, the starting steam ejector required a high level of operator intervention. In sum, Chaves startups using the supplied steam ejectors were too long, starting reliability was poor, and resources (fuel, cooling water, personnel time, etc) were wasted.

Solution. Chaves technical staff analyzed the available technologies to identify the best alternative for pulling vacuum on startup. It was to install a vacuum pump in parallel with the existing starting steam ejector (Fig 1). Note that the vacuum pump is operated only during startup; the more-efficient steam-jet evacuation system is used during normal plant operation to hold vacuum. 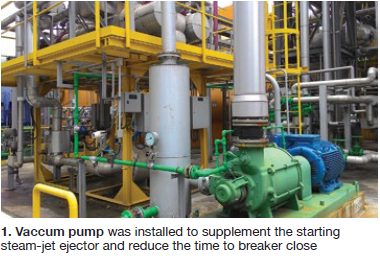 To implement the project, electricity supply was provided through an MCC panel, sealing water to the pump through a service water line, and operational control through the plant’s DCS (Fig 2). 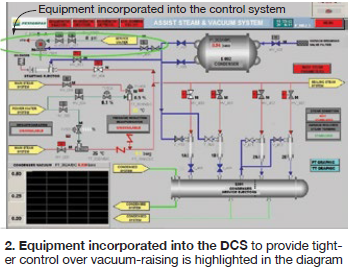 Results. The proposed solution to install a vacuum pump and significantly reduce the time for unit startup resulted in a two-hour saving plus other benefits (Fig 3). The details: 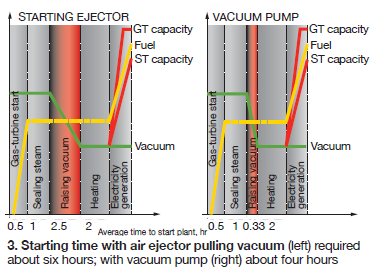