Challenge. Following a gas-turbine shutdown, the temperature differential between the upper and lower halves of the turbine casing was conducive to casing distortion capable of reducing blade tip clearances and delaying GT restarts.

Spin cooling after shutdown was recommended as a way to manage the ability to restart. This technique uses the installed 2500-hp GT starting motor in a series of short operations to achieve faster cooling. However, it increases both the operating time on the starting motor and starting train as well as the cost of electricity for their operation.

The series of starting-motor operations took approximately 28 minutes, equaling the amount of time the motor is used for a startup. Once an automatic spin-cooling sequence had been initiated, the GT was not ready to restart for approximately six hours.

The 20-hp motor reduces the wear and tear on the GT starting motor; plus, it reduces shutdown costs because of the much lower electric consumption. The turbine-cylinder purge-air system provides a ready-to-start status after the GT has been on turning gear for an hour, reducing the time from shutdown to restart by five hours.

Challenge. Lea was designed with six 2000-ton mechanical chillers, together capable of cooling the GT air inlet temperature from 95F to 46F. The facility was also designed with a 4-million-gal thermal storage tank capable of storing 42F chilled water for augmenting net output during the heat of the day.

The chilled water system was designed to operate in one of these three modes:

The plant DCS logic was improved to provide smooth transitions between modes of operation, eliminating the disruptive system downtime between modes—and to create a new mode. “Mixed mode” was made possible during the system redesign, which allows the facility to charge the chilled water tank while the mechanical chillers are in service, offering a new way to maximize the mechanical chiller utilization.

Results. The switch-on-the-fly mod enabled more flexible operation of the chilled water system. Now it can be set to discharge the tank in the heat of the day, switch on the fly to mechanical chillers once the tank is discharged, then switch on the fly to charge the thermal storage tank after the evening peak—all without having to take the chilled water system out of service to change modes.

Challenge. Lea’s combined cycle operates on AGC. As unit output fluctuates during normal operation so does the negative pressure at the bearing drains. To maximize the capability of the lube-oil mist separator, operators had to adjust its bypass valve with GT load changes. But even with frequent adjustments of the bypass valve, the vent pipe tended to drip small quantities of oil that were caught in a bucket tied to the end of the pipe (Fig 1). 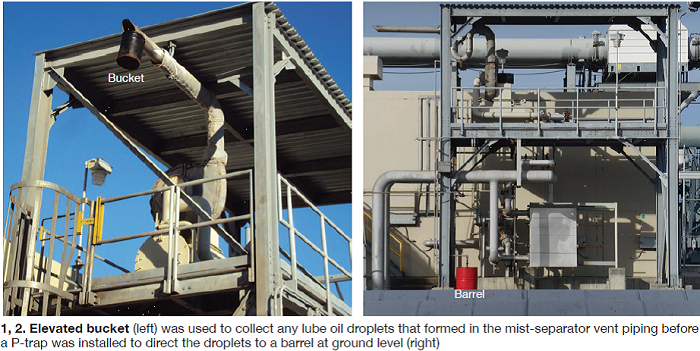 Solution. During a planned shutdown, the facility worked with a welding contractor to install a P-trap in the vent piping. A screen strainer was added between two flanges in the vent piping to further aid in eliminating mist from the vented vapor, and a 1-in. drain line was routed from the bottom of the P-trap to a barrel located at grade (Fig 2).

Results. The vent-piping P-trap allows oil previously captured in a bucket to be transferred safely to a drum at ground level, eliminating the need to have personnel work in elevated areas wearing fall protection equipment. It also precludes any chance of an oil spill from handling the bucket. 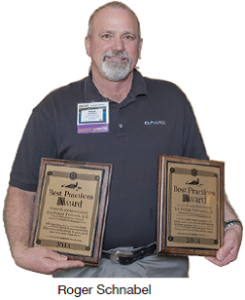 Challenge. The HRSG makeup treatment system was supplied with two 100% reverse-osmosis (RO) trains, each with a 5 × 3 × 2 array capable of producing 140 gpm, and one 68-gpm EDI unit. Although the 300,000-gal demin storage tank was designed satisfy makeup requirements during periods of water-plant maintenance, EDI capacity was a limiting factor that required attention. The water plant had eight 3.6-ft³ mixed-bed demineralizers for polishing the EDI product upstream of the storage tank.

Solution. To maximize production of high-quality boiler water, the facility implemented a two-phase modification. In the first phase, the EDI unit was removed and a 50-ft³ mixed-bed demineralizer was installed downstream of the single-pass, three-stage RO system to polish its product water.

Although Phase 1 increased system throughput from 68 to 140 gpm, the mixed-bed bottles required offsite regeneration at significant cost. In the second phase, the facility worked with a contractor to convert the two three-stage RO trains to a single two-pass RO with three stages per pass; a caustic injection system was installed near the inlet to the second pass. The system reconfiguration made it possible to produce 140 gpm of high-quality water.

Finally, the 50-ft³ mixed-bed exchanger was replaced with a rental trailer capable of polishing more than 8 million gal of water without regeneration. A typical operating cycle is about six months.

Results. Completion of the two-pass RO modification and the use of the mixed-bed trailer increased water production from 68 to 140 gpm while reducing the cost of demin water 10-fold, from $0.04 to $0.004 per gal. Also, the amount of time it takes to fill the 300,000-gal demineralized water storage tank has been halved from three days to a day and a half.