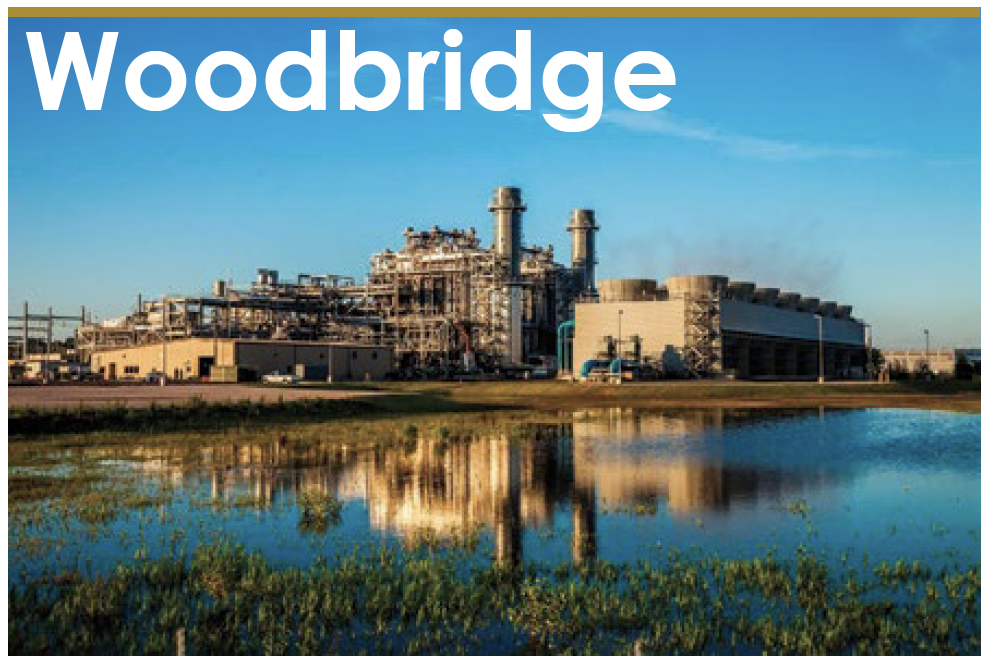 Challenge. The GE D11-A steam turbine at Woodbridge Energy Center is an outdoor unit mostly unprotected from the elements. It is located about 40 ft above the condenser and associated balance-of-plant equipment and runs primarily baseload. The collector air intake filters for this unit were not safely accessible without locking out the exciter, regardless of whether the unit was online or offline.

Reason: The busbar location where the power cables to the brush rigging are bolted is directly above the intake filters (Fig 1). Plus, the collector air intake and exhaust were simply two holes cut in the concrete roughly 12 in. apart from each other (Fig 2). After a steam-turbine trip, caused by a collector ground fault during a heavy rain event, the collector’s filters were removed and found caked in carbon dust. Plus, the collector was damp from the rain being pulled through the door seals by the vacuum created by the clogged filters. 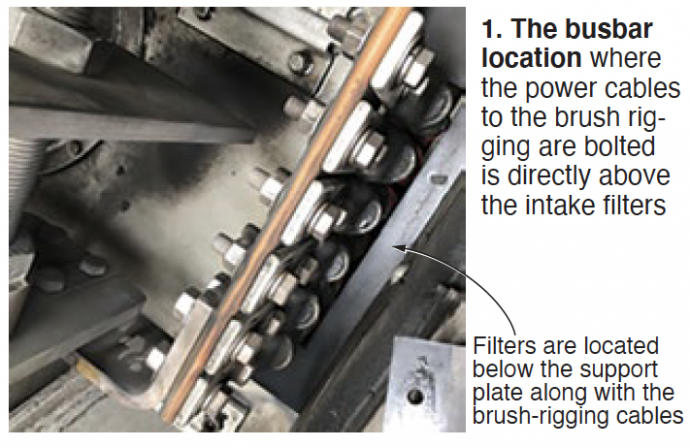 The week prior, an online ring grind had been performed which normally would not be a contributing factor except that the dust generated during the grind was being exhausted and then partially re-ingested by the collector filters. Plus, the filters, which are impossible to inspect or service with the plant online, also are subjected to an excessive amount of carbon dust from normal brush wear, because of the recirculation effect. These two issues eventually caused the aforementioned unit trip and maintenance headache.

Solution. This two-fold problem was resolved by redesigning the air intake assembly. Specifically, ductwork was installed from the rectangular hole in the concrete that had been acting as the air intake, down to ground via a support column (Fig 3). Moving the air intake down to grade allowed staff to install new, and easily accessible, filters (Fig 4) that could be inspected and serviced with the unit online. Additionally, a 90-deg exhaust duct was installed over the existing exhaust port to direct any carbon dust well beyond the new air intake.

Results. With the filters relocated, the overall cleanliness level of the collector housing has improved dramatically and water ingestion is no longer an issue. This was most evident after the collector was inspected following a collector ring grind and found in near-perfect condition and free of carbon dust.

Additionally, the air intake filters have been removed, inspected, and cleaned several times with the unit online, without any issue. Lastly, the addition of a differential-pressure gage across the filters has further improved maintenance efficiency by giving the site team a real-time view of filter health.

Doubling down on haz-gas analyzer reliability

Challenge. At Woodbridge Energy Center, major equipment is located almost entirely outdoors. When the site went commercial in 2016, it was one of the first to use a newly designed aspirated hazardous-gas detection system. It relies on instrument air and an aspirator to pull air samples from two different compartments on each gas turbine through dedicated LEL sensors.

These sensors have the capability to shut down the turbine should two in either compartment go into a state-of-alarm—that is, high LEL readings and/or a loss of sample flow through the LEL detector—at any given time.

Because the detection system is exposed to the elements, issues immediately began to arise with sensor stability on days when ambient conditions changed quickly. The issue was exacerbated when high winds were present. Sensor instability caused numerous false alarms which led to unit runbacks and in a few instances, trips.

Solution. Staff learned through testing that the factory-installed stainless-steel cover for the LEL sensors (Fig 5 left) was creating a thermal-sensitivity issue within the sensor itself. This was most evident during sudden rain events in the summer where the cover and sensor temperatures could drop by 20 deg F in a matter of seconds. That temperature drop was even greater (perhaps even 100 deg F) when the rain event occurred right after the sensor cover had been exposed to direct sunlight. Winter brought similar issues where the sunlight would warm the sensor but then high winds would cool it off rapidly and repeatedly. 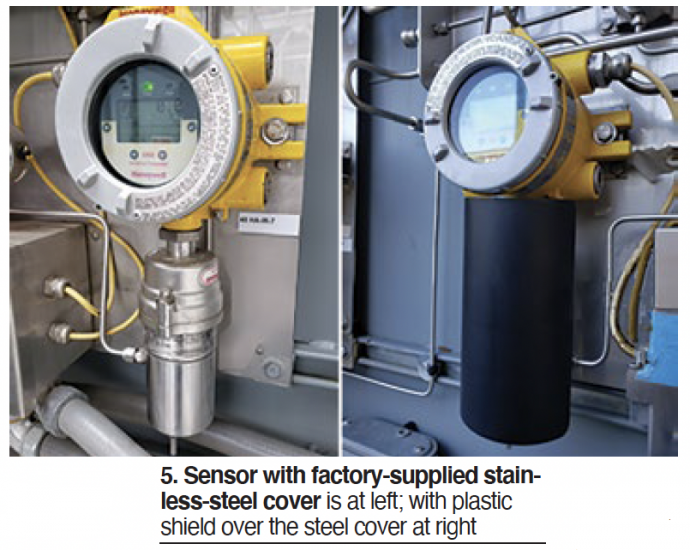 To solve the problem, the steel cover required protection against the elements. Plant staff and the OEM decided the best option was to double up on the sensor covers. The factory-installed steel cover would stay as is, but a new plastic shield would be clamped around it (Fig 5 right). Plastic conducts heat very poorly and also blocks most, if not all, the rain and wind from reaching the steel cover.

Results. Since installing the secondary covers, performance of the 24 haz-gas detectors during weather events has been flawless. This simple and relatively inexpensive solution dramatically increased plant reliability.

Additionally, storm-water runoff is captured by large drains which empty to storm-water basins. Those basins then drain into a retention pond which discharges to the adjacent wetlands.

At face value, this is a typical configuration for outdoor powerplants; but Woodbridge was faced with a problem when it came down to how to properly react to an accidental release (chemical, oil, etc). Because the floor drains were not labeled, it would not be readily apparent (in the moment) what sump should be shutdown to prevent the product from escaping to the larger systems and potentially the environment.

This was a significant concern because the sumps, which can only be shut down manually, could easily be several hundred feet away and/or obscured by a building or piece of equipment. Shutting down all sumps would be impractical and time-consuming. The site team had to develop a way to easily and rapidly identify what sump to shut down should a release event occur. 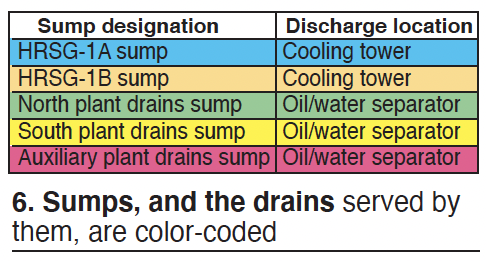 Solution. To expedite the drain/sump identification process, the site team developed a color-coded chart (Fig 6), which was broken down by sump. The color codes were then used to create permanent signs for each sump, calling out its name and discharge location (Fig 7). After the signs were in place, an identifying color-matched circle (Fig 8) was painted next to each drain. The color corresponds to the sump which the drain goes to. Now, if an accidental release occurs, the plant team will instantly know which sump to secure, saving precious time. 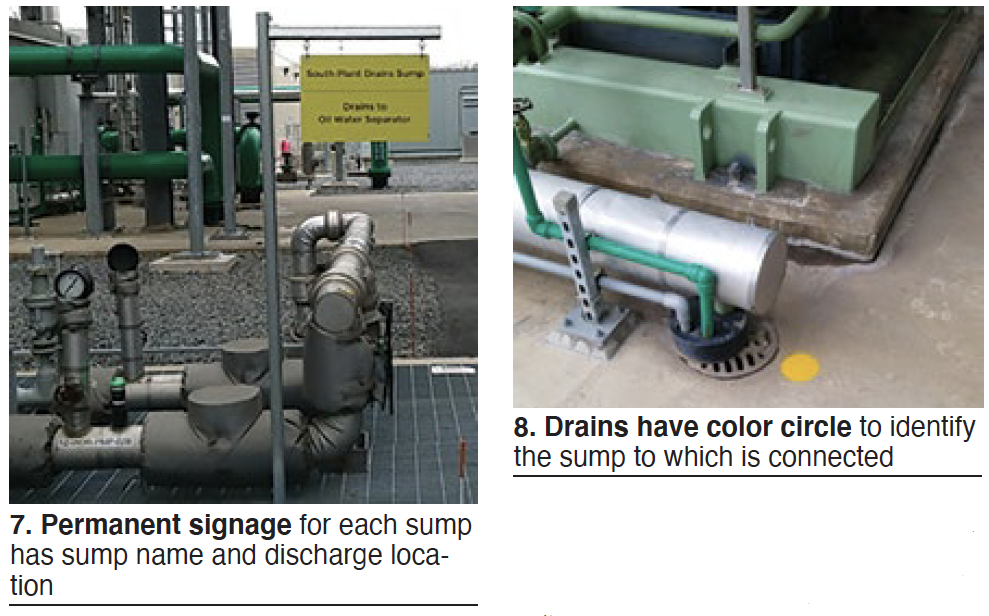 Results. Fortunately, there have not been any actual release events to test this new system under live circumstances. However, mock drills have been performed and the feedback from those drills has been highly encouraging and indicative of a dramatic decrease in incident response time.

Progress in driving towards cultural excellence

Challenge. As Woodbridge Energy Center entered its fourth year of commercial operation, management wanted to focus on understanding how to reinforce the best elements of the plant’s culture. The challenge the team faced was how to effectively gather and present information in a way that provided understanding and visibility of individual program elements and how they connect the team as a whole.

Solution. In November 2018, plant personnel were surveyed and asked to list their top five personal values and rank them in order of importance to themselves. The survey was anonymous to ensure that employees felt comfortable enough to put down their true top five. Once all of the results were collected, the responses were compiled, combined, and sorted in order to come up with the top five guiding values for the entire team.

For Woodbridge, those top five values were teamwork, accountability, integrity, learning, and respect. Results in hand, the team, at a December 2018 safety meeting, came up with the three areas they felt would most benefit from knowing our team values—safety, excellence, and availability. These were promoted on the graphic in Fig 9, which then was posted in various locations around the site (conference room, control room, etc) as a reminder of what we as a team use to guide and drive our daily decision-making. 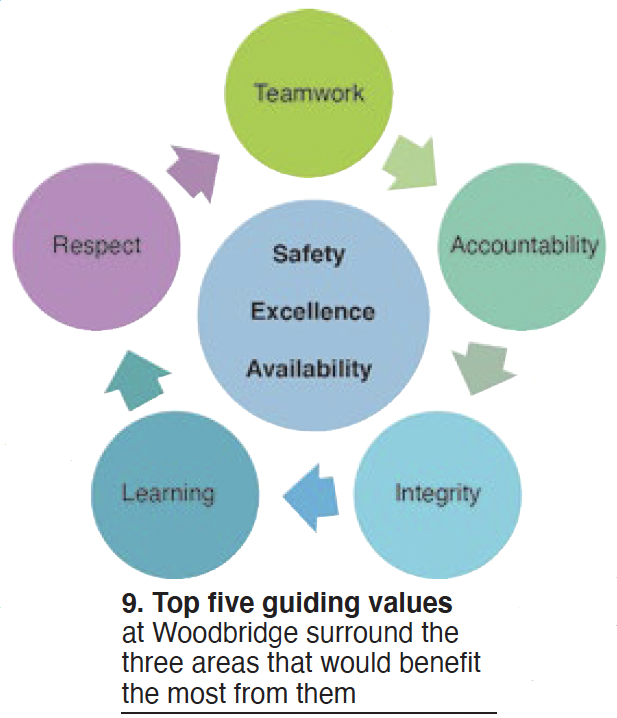 During the six safety meetings in 2019, each of the five values was singled out and discussed in detail. The discussions focused on explaining what each value truly means to our team, how it applies to the work we do, and in most cases, a group activity or survey in order to continue building a positive work climate. Surprisingly, the deep dives on team values proved the most beneficial and rewarding part of the process.

This was particularly evident during the February 2019 meeting where the value of learning was highlighted. Prior to the meeting, plant personnel were given a 70-question Learning Styles Survey and asked to answer each question from 0 (not like me) to 2 (exactly like me). Survey results were averaged across all 22 team members to create a radar plot (Fig 10) showing how the team learns best. 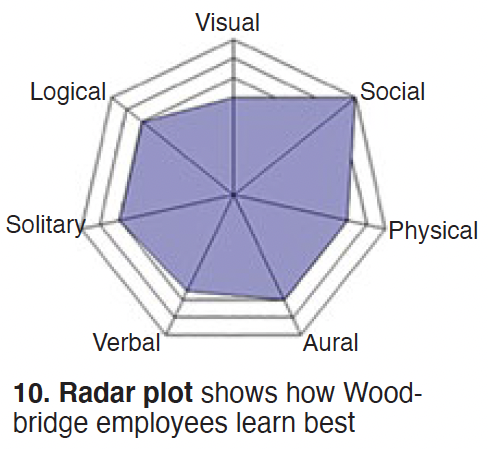 Using this information, we were able to cater to the remaining values discussions in a way that would be the most beneficial to the team. Example: A discussion around the value of teamwork where we knew to design the training around hands-on (physical) group (social) activities based on the results shown in Fig 10.

The learning-styles assessment allowed the team to design a teamwork exercise that encompassed the styles of all members. These learning styles were taken into consideration when creating future training programs for the full plant staff.  This team-personalized approach to the values discussions, safety meetings, and training in general continued on through the remainder of 2019. It culminated in a year-end values survey to reflect on how this experience improved staff morale while creating a sense of ownership.

Results. After the values assessment on learning styles, the team was able to plan training for the remainder of the year that best met the needs of the plant staff. This intentional planning led to more successful training and higher concept retention. In addition, the remaining values that were focused on throughout the year were reflected on in the December 2019 safety meeting.

A final anonymous survey was conducted to gauge how well the team felt that the Woodbridge team as a whole was doing in following the five values over the prior year. Survey participation was 100% and yielded interesting and positive results. On a scale of 1 (strongly disagree) to 5 (strongly agree) the five values were scored and ranked. The average score for the five values was 4.06 with teamwork being the highest at 4.2 and accountability the lowest at 3.93.

While there was a feeling going into the survey that the results would be good, having an average score above 4.0 was beyond encouraging and showed just how much the team believed in this yearlong activity. It also provided us with the knowledge that accountability, while having a very good score, is an area we can work towards improving in 2020. Overall, the Woodbridge team was able to use the values survey to improve training throughout the year and continue to build plant morale based on what is important to everyone. CCJ