The 2019 conference of the Combined Cycle Users Group (CCUG) was a prime example of “working together,” co-located with the generator (GUG), steam turbine (STUG), and powerplant controls (PPCUG) user organizations. Attendees were invited to participate in sessions conducted by all four groups at the Marriott St. Louis Grand, St. Louis, Mo, August 26-29.

Owner/operators can view Ott’s slides, and those of the other presenters, on the Power Users website at www.powerusers.org. Registration for access is simple and most worthwhile: More than a hundred presentations were made at the so-called Combined Conference.

At 1 p.m., all participants came together for introductions by Jake English, conference business manager and member of the STUG steering committee. He emphasized the founding principle of sharing information and keeping the discussions technical, not commercial.

Jimmy Daghlian then presented the CCUG’s 2019 Individual Achievement Award to Consultant John Peterson, formerly with BASF and a founder of the Frame 6 Users Group, and Steve Royall of PG&E. This year’s Clyde Maughan Award went to James Timperley, EMSA Technical Services (formerly with American Electric Power Co and Doble), presented by Kent Smith of Duke Energy and past chairman of the Generator Users Group.

Keynotes. FBI Special Agents Kyle Storm and Jaret Depke presented the first of two keynotes: “Confronting cyber and counterintelligence threats from the FBI’s perspective.” Jeff Chann of GE, followed with the second: “Managing your plant over the next decade.” Chann addressed the common concern of survival in the changing market. His message: “If we don’t react, the balancing authority will go around us and find the solution.”

The tone was set for not how to thrive, but how to survive. The message: Contribute to the overall portfolio, be best in your zone, mix in, and realize that your plant’s capabilities on Day One are not what’s needed tomorrow.

More focused perhaps: “Run lean, and learn how to get the hell out of the way!”

Content from well over 100 presentations/discussions was shared at the 2019 Combined User Group Conference. What follows are highlights from a few of the CCUG presentations to give you a flavor of the meeting and to encourage your participation in the 2020 conference at the San Antonio (Tex) Marriott Rivercenter, August 31-September 2.

Thick metal parts are having problems sooner than expected, largely because of repeat thermal transients (cycling). PG&E’s Tim Wisdom characterized the challenges of cycling in Fig 1. 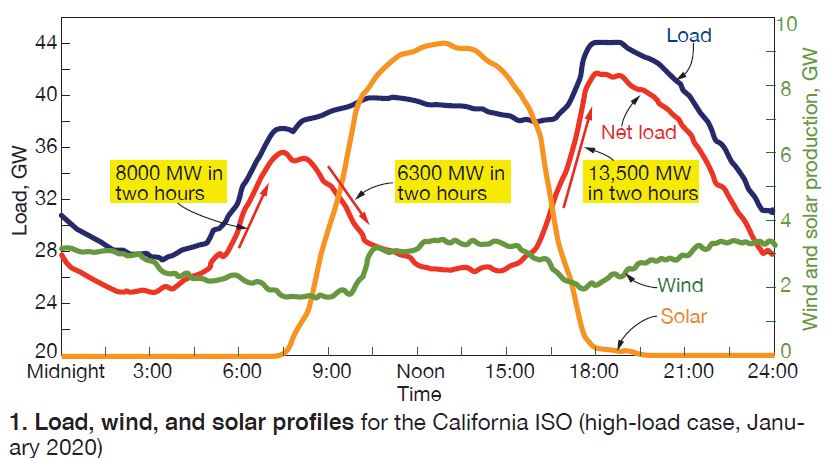 As Wisdom put it, “We are seeing damage to main-steam and hot-reheat valves, and cracking of the HP drum internal downcomer nozzles. The correlation between cyclical duty and increased owner/operator time and expense on high-energy piping (HEP) programs is becoming more apparent during every outage.”

Major valves are failing early regardless of material, including F91 (forged P91). Components thought to be reliable for 30 years “are failing at around one-third the expected life,” he cautioned.

The valves discussed suffered from delamination of hard facing materials (stellite liberation) which is generally repairable, but also from deep-body cracking which is not. Wisdom also addressed the common issues of cracking in steam and bypass lines (Figs 2 and 3).

A heads-up: One site had to stop and wait for a state-authorized inspector to approve temporary repair measures for a P91 spool piece because the valve was within the code boundary of the HRSG. The ensuing discussion on the delay included a reminder of long lead times on new critical components.

So how do you prepare to cycle twice each day?

He followed with some valuable lessons learned:

Returning to his cycling discussion, he offered a motivating mental image: “We need to be ready at all times. We have become the light switch.”

Award recipient Peterson discussed “Maintaining best gas turbine performance” with an informative historical review—including the increase in compression ratios for frame gas turbines over the years. The key today, he stated, is “the efficient compression of air.”

He listed the primary factors for compressor losses:

He then reviewed various cleaning techniques including:

A case study on excessive Frame 6 fouling, and discoveries inside the filter house, led to a tangential discussion on the pros and cons of hydrophobic HEPA filters.

PSE operates five combined cycles varying in age from eight to 25 years, in environments ranging from marine to arid.

“Have a long-term program, and start inspecting,” he said. “Don’t wait for failures.”

Units built in the early 2000s are now at mid-life. Target areas for HRSG heat rate improvements are:

Economizer approach temperature is a critical parameter, discussed in detail. Bartol then turned to a typical three-pressure duct-fired HRSG with reheat, and the benefit of adding 12 tube rows to the HP economizer (Fig 4). 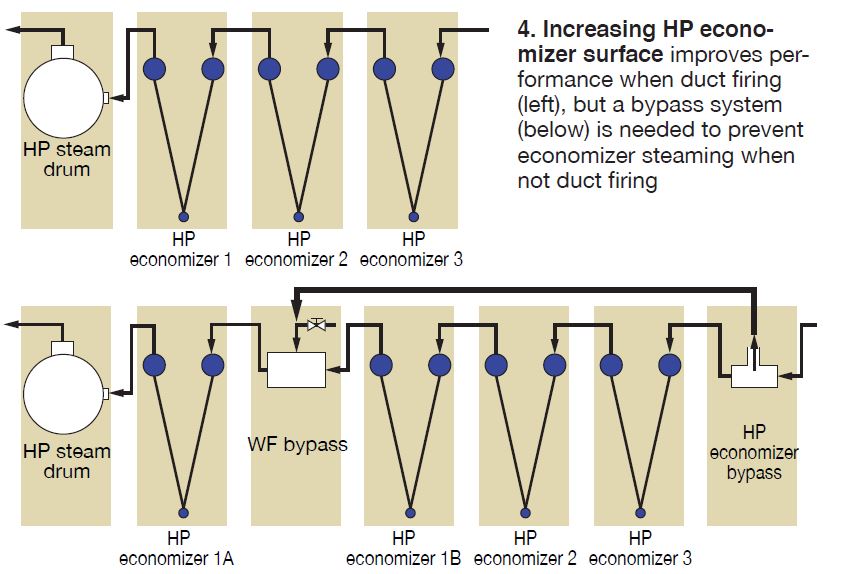 In his example, adding these rows increases steam turbine output by 2.5 MW for a 1 x 1 F-class plant with duct firing. But this also requires a bypass to prevent economizer steaming during unfired operation.

The additional surface can be included in a new HRSG if heat rate while duct firing is important. Retrofits might prove difficult because of space limitations, but the SCR duct may have room available and, if so, should be considered.

For the increasingly familiar topic of attemperation, Bartol listed some negative consequences of lowering the steam temperature set point in the control room, using, as an example, a 7FA with typical three-pressure HRSG. Such action can do more harm than good, he warned. The increased spray-water flow can damage downstream pipes and tubes, contribute impurities to steam, and decrease steam-turbine performance. 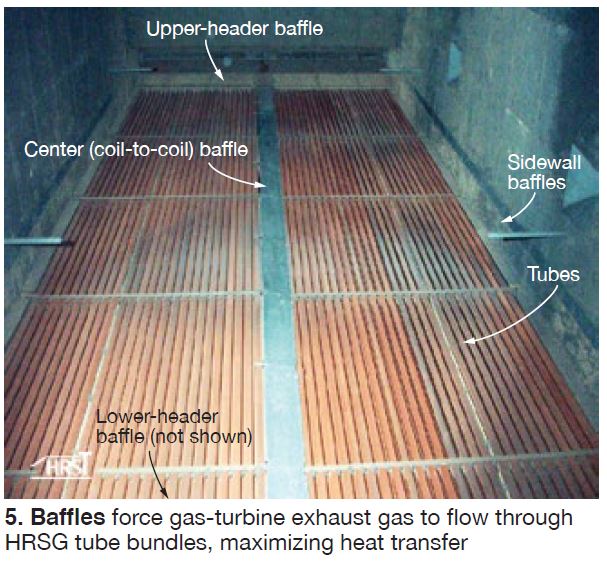 “Baffles are relatively inexpensive yet very important devices,” he said. “But they must be properly designed for thermal expansion, must be sturdy, and must be part of each inspection. Fixing a small portion can result in a large performance gain.”

Casing hotspots may have a smaller impact on performance, but can lead to cracks and have a negative impact on safety. Exhaust leaks also affect performance. Common leak causes are failing bellows, torn fabric seals, failed penetration seals, and failed expansion joints.

For steam-turbine interaction, “Watch pressure drop in the reheater section” (from exit of HP stage to entrance of IP stage). A 10-psi increase can reduce steam turbine output by 0.2 MW in the F-class example (Fig 6). 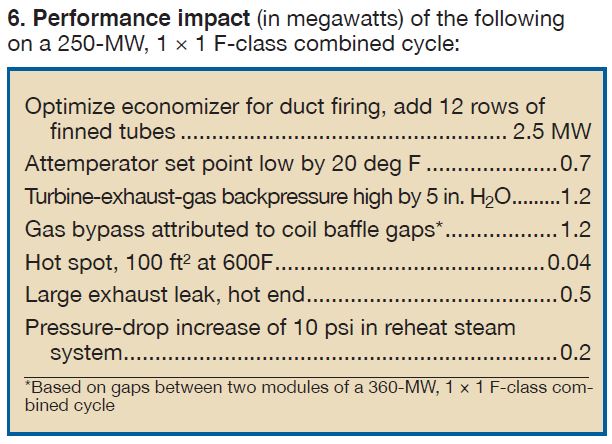 HRST’s Guy Thompson followed with the negative impacts of superheater, reheater, and piping drain problems and the formation of condensate, another increasingly encountered topic.

His focus was on low-point drains in the high-temperature reheaters and superheaters. During the past 15 years, emphasis has been on drain size, drain valves and automation, and operating practices to ensure condensate removal.

He then offered some rules of thumb to reduce resultant tube and header damage, generally recommending 2-in. drains for the range of pressures encountered by F-class HRSGs.

Case studies focused on the importance of AIG cleaning for efficiency, conversion rate, and system capacity.

Forward-looking discussions included the increasing presence of sulfur from shale gas, the smaller size of some replacement catalysts, and use of dual-function catalysts to reduce both space and backpressure.

Laptops and removable media included in No. 4 above are among the greatest new security challenges, he said. They are in wide use throughout each site, particularly during outages, and involve many individuals, groups, and companies. Checklists and processes initiated by Talen Energy were shown and discussed in detail.

NERC alerts also were reviewed—including concerns over Chinese supply and drones used for both security and surveillance. Alerts and bulletins provide guidance on such timely issues. In 2019, an alert was issued on drones offering this specific guidance:

The presenters’ experience, water beading in a condenser has shown the benefit of a polyamine protective film. Once formed, in their example, the protective film remained intact even after dosage fell below the required level or was interrupted for a short period of time (Fig 7). 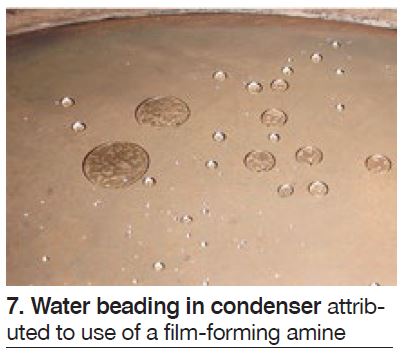 Nitrogen blanketing remains the industry standard for long-term layup, but layups with amines can help reduce corrosion and the potential for under-deposit corrosion in evaporator tubing. Unlike other protection methods, the presenters explained, “the FFS technique is implemented in advance of the unit outage while the equipment is still operating.”

Application methods and recommendations were outlined, along with the caution of over-feeding.

Calpine’s future plans include studying the differences in available and emerging FFS products, expansion of this chemistry to more units, and combining the feed of neutralizing and filming amines to make initiation and long-term optimization easier at each site.

“Any outage of three weeks or more needs at least two years of planning,” stressed Gassert. “Bring your managers into the entire planning process, and put your plans in each contractor bid.”

Gassert’s presentation covered all important areas including maintenance, defining the roles of not only contractor staff but also your own, and physical site management. Beyond the many traditional items, Gassert added some interesting thoughtworthy items:

Go for the realistic, not the best, schedule. And remember: “Under budget and on schedule means nothing if someone gets hurt.”

Gassert was asked, “When do you implement scope freeze?” The answer: at three months out. Any deviation requires at least two authorized signatures. 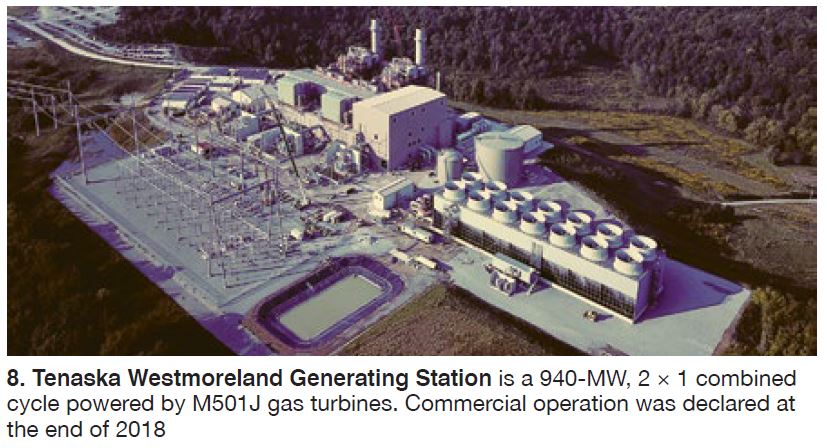 “Knowledge must be created and captured, shared, and transferred, and organized and integrated. Our biggest problem today is skill sets.”

Westmoreland is a nominal 1000-MW combined cycle with only 24 employees. Perhaps more significant, 80% of the staff has moved from a union coal-plant position to this non-union combined-cycle environment.

His comments touched on numerous aspects of daily management and life at the facility, including interpersonal relationship of staff and regard for the community, while focusing on the common issues of today’s environment. Items such as:

His closing comments offered some hope, while touching on labor and skills shortages:

He ended with a thought-provoking quote by Dale Carnegie: “Employees don’t leave companies, they leave people.”

Wednesday was reserved for presentations by the 2019 diamond sponsors, General Electric and Siemens, and platinum-plus sponsor Mechanical Dynamics & Analysis. Participation was limited to users and personnel from the three sponsoring organizations.

Experts from MD&A addressed specifics of balancing to reduce vibrations, not only on the turbine, but on other balance-of-plant (BOP) rotating equipment as well. Cautions were issued on common mistakes made while balancing. Details were then given for low- and high-speed balancing on location and at MD&A facilities, along with specific criteria for gas-turbine, steam-turbine, and generator rotors.

Alignment discussions and graphics focused on couplings and internals, specifications, and the impact of foundation settlement. Coupling example details covered both 16-point and laser methods and equipment.

General Electric spearheaded the afternoon discussions with a range of topics including: