You can add another color to the burgeoning spectrum that is hydrogen as an energy stream: turquoise. According to Brad Bradshaw, speaking on the Hydrogen Energy Center’s (HEC) Apr 23, 2021 webinar, “Decarbonizing the Gas Grid with Hydrogen,” turquoise H2 is methane subjected to pyrolysis to split it into hydrogen and solid carbon. Carbon dust is easier to deal with (and has valuable industrial uses) than CO2, says Bradshaw, president of both HEC and Velerity, a Massachusetts-based research and consulting firm.

HEC describes itself as a “professional association focused on accelerating hydrogen as an enabling solution for renewable energy.”

While you’re at it, you can also add another squishy term to the industry’s lexicon: renewable gas. This is natural gas that is processed to reduce the amount of carbon that will ultimately be discharged when it is burned or otherwise used. Processing can be as straightforward as blending H2 in pipeline gas or as involved as gas pyrolysis.

The introduction of the HEC’s Renewable Gas Consortium (RGC) is a direct counter to pressures the natural-gas industry faces—listed by Bradshaw as bans on new gas hookups at the local distribution company (LDC) level, pipeline permit reversals, and “calls to electrify everything.” However, the call to electrify everything is not realistic, says Bradshaw, such as winter heating loads in the northern parts of the country and many industrial process heat applications—including district heating and cooling.

LDCs face a threat similar to that of electricity distribution utilities: As more gas customers leave the grid, the remaining customers have to pay more to maintain the infrastructure. Major cities in California, Massachusetts, Washington, and Colorado—including Berkeley, San Jose, Mountain View, Brookline, Denver, and Seattle—have banned new gas customer hookups. Others are seeking to displace gas with electricity.

While solar power purchase agreements have reached 1 cent/kWh, solar and wind curtailments are rising, notes, Bradshaw, because of the mismatch between renewable energy daily and seasonal availability and electricity demand curves (figure). If you can use this excess electricity to moderate natural gas’ carbon footprint, then the phrase “renewable gas” isn’t quite as squishy.

One example is adding H2 to biogas which “sweetens” the methane content by up to 70% by converting CO2 to methane. There’s a net benefit here for biogas that would have been released to the atmosphere because methane’s climate impact is, using the average of the range of figures reported, around 20-fold greater than CO2. 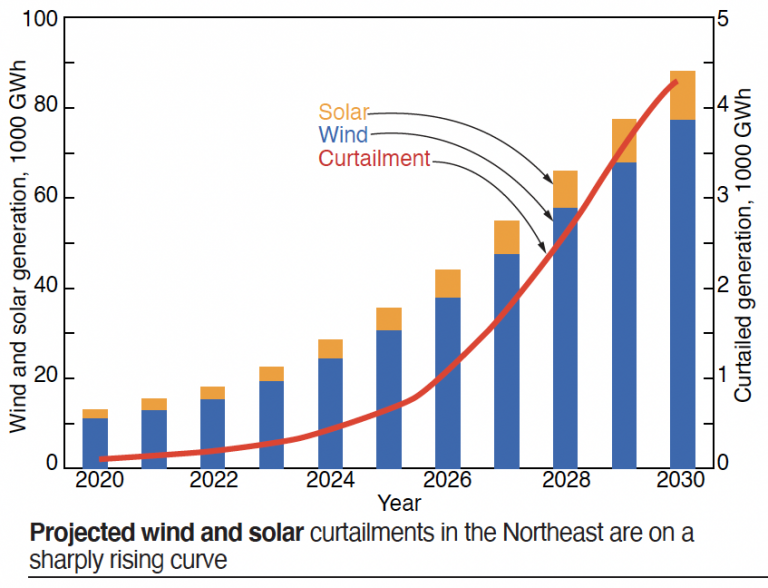 One “turquoise H2” company, C-Zero, Santa Barbara, Calif, employs an innovative thermocatalysis pyrolysis process to convert natural gas to carbon and H2. It is described on the company’s website as a “drop-in” system between the gas distribution infrastructure and gas customers. Bill Gates’ clean energy investor group and Mitsubishi Heavy Industries are both investors in the company and technology. However, the notion that a pyrolysis process can be simply “dropped in” on the gas delivery system makes the phrase renewable gas look like it belongs in Webster’s.

The National Renewable Energy Laboratory (NREL) is leading a coalition of six national labs in an R&D program to “address the technology barriers to blending” H2 in natural gas pipelines. Southern Company Gas, part of Southern Company, is a major private sector participant.

Expectations around H2 should be tempered with the understanding that most of the current activity is positioning for the billions in expected government and venture capital investment. Enthusiasts will undoubtedly declare “this time is different,” but the vast majority of technologies from the clean coal RD&D program—including integrated gasification combined cycle, pressurized fluidized combustion, slagging combustors, and back-end multi-pollutant removal processes—never reached commercial adoption beyond one or two full-scale demonstration units. In the meantime, solar, wind, and gas-fired gas turbines and combined cycles displaced coal-fired systems based on lifecycle economics.

H2 has an added challenge: It is an energy carrier not an energy source, just like electricity. Ultimately, economic viability depends on whether the value of carbon, with respect to its threat to climate and social disruption, is priced high enough to counter the cost of extracting the hydrogen. CCJ