An F-class user recently called CCJ’s editorial offices concerning the impact of cycling on wear and tear of HRSG components. Plant personnel believed thermal-fatigue damage to critical components might be accumulating at an accelerated rate because of current operating practices and he wanted to learn more about the value of stack dampers and stack balloons for extending fatigue life, as well as industry experience with them.

CCJ has reported on this topic several times over the years, most recently in the 2Q/2016 issue, Intermission control: Reducing downtime risk to HRSGs. The editors recommended that the caller contact Bob Anderson, the HRSG consultant and expert on the publication’s Editorial Advisory Board. It just so happens that the upcoming “HRSG Forum with Bob Anderson,” Charlotte, Feb 28 to Mar 2, 2017, will address this subject.

Former plant manager Anderson’s credentials include his participation as a principal investigator in EPRI’s “Evaluating and Avoiding HRSG Pressure Part Damage Influenced by Stack Damper Operation,” a December 2009 report available to the research organization’s members. Anderson’s work revealed there was the dearth of historical shutdown/hot-standby data for the same unit or similar units, with and without a stack damper. He believes not much has changed since 2009 in this regard.

The most striking attribute of the data collected and reviewed, Anderson recalled, is the great variability in the pressure-decay rates for the high-, intermediate-, and low-pressure sections of HRSGs during hot standby for generally identical equipment using similar operating procedures.

One of the conclusions drawn by investigators: While it is apparent stack dampers and duct balloons can help extend the fatigue lives of pressure parts in cycling units, their potential benefits can be overwhelmed by one or more contributors—such as leaking steam or feedwater isolation valves, lackadaisical isolation-valve operating procedures during shutdowns and startups, and the addition of cold water to drums after the gas turbine is shut down.

Anderson went on to say that thermal-fatigue damage occurs in various pressure parts during all startups. The greatest damage, he continued, is suffered during an immediate restart after a trip, followed by cold, warm, and hot starts—in that order.

Stack closures (damper and balloon) only delay the loss, Anderson said, when used without steam sparging, because they only benefit if the unit is restarted before the gas-path temperature decays to ambient. This can occur within four to 18 hours depending on how well the HRSG is bottled up, how well the stack/breeching is insulated, and how promptly the gas path and steam/water systems are isolated.

Anderson said, based on his experience, plants that cycle frequently and can accommodate a damper, prefer it over a balloon. However, engineering is an important part of the decision-making process. Example: Retrofit of a stack damper may not be possible without encroaching on the minimum unobstructed distance from CEM probes. In such a case, a duct balloon might be your only choice.

Keep in mind that retrofit dampers typically cannot be installed at the top of an existing stack because it is not designed for the additional weight at that location. Some plants have retrofitted dampers just above the breech opening by fabricating the damper inside the stack rather than cutting the stack to install a modular damper.

Regarding balloons, Anderson said they are used effectively at many plants, but typically for keeping the gas path dry during layups of a few days or more rather than for overnight shutdown. In his experience, for a balloon to be useful for overnight shutdown a crew of two must be standing by to deploy the balloon immediately upon GT shutdown, and again to retrieve the balloon immediately before startup. Given the shrinking number of employees at most plants today this may not be practical. 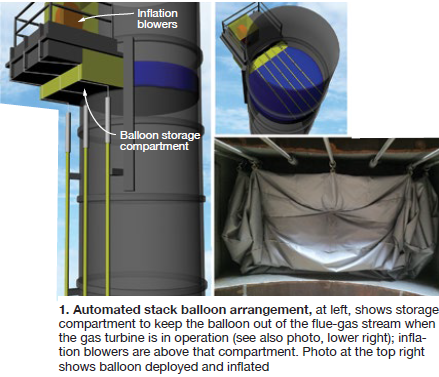 The editors contacted duct-balloon expert Gary Werth (www.ductballoon.com) for an update on a system capable of remote balloon deployment/retrieval (Fig 1). He said a system is in beta testing and has operated successfully. Anderson noted that the cost of installing a door in the stack and modifying or adding new stairs, ladders, and platforms for balloon deployment and retrieval might cost more than the balloon. Mindful of this possibility, Werth is developing a simpler design (Fig 2). 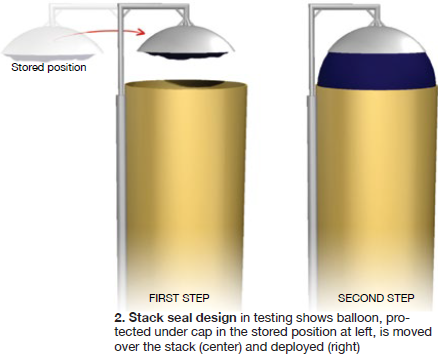 One final note: Balloons can be installed in the stack and in the GT inlet. Both locations require thoughtful administrative and/or physical interlocks to prevent accidental operation of the gas turbine when the balloon is deployed. CCJ