By Gary Engstrom, US Water

Reclaimed municipal wastewater continues to gain attention as powerplants evaluate options to reduce their dependence on freshwater for steam generation and cooling. According to the EPA, thermoelectric power generation accounts for nearly half of the nation’s freshwater withdrawals. The lion’s share of this water is used for cooling.

Recent regional water shortages have highlighted the importance of finding alternative, sustainable water sources for power generation. Water rationing or limits on freshwater use can have a crippling impact on plant capacity and operations.

So-called municipal reclaim wastewater (MRW) often can be used to relieve some of the pressure on freshwater supplies while providing a reliable, sustainable water source. MRW as plant makeup can be successfully designed into new and existing facilities. The critical success factors and the components of primary concern are the same for both, but cost-effective options available to address them vary between new and existing facilities, Engstrom says.

He identifies below several of the key factors requiring evaluation before deciding on MRW for combined-cycle applications. Plus, it the alternatives available to address/mitigate the performance-related issues MRW may create.

MRW quality. Reclaim wastewater is subject to the same variability in the common-source water constituents plant operators are accustomed to monitoring and addressing in the day-to-day operation of their cooling-water and boiler-pretreatment systems.

However, Engstrom points out that overall MRW quality is determined in large part by the National Pollution Discharge Elimination System (NPDES) permit which controls the type and level of various contaminants that may be discharged. Acceptable contaminant levels depend on the receiving body of water and vary widely depending on the location, characteristics, time of year, and volume of the stream or surface water body.

Wastewater discharges contain some important constituents that can have a significant impact on corrosion, deposition (scaling/fouling), and the potential for microbiological growth not typically encountered at significant levels in the more familiar fresh makeup waters. These include nutrients such as ammonia/ammonium (NH3/NH4+), nitrate (NO3–), nitrite (NO2–), phosphorus/phosphate (P/PO4-3) and organic loading expressed as biological oxygen demand (BOD) or total organic carbon (TOC). These compounds are a direct result of the biological processes used to treat wastewater. 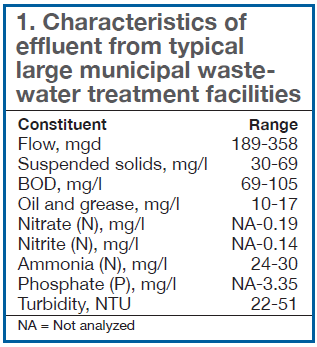 Table 1 summarizes the typical quality of municipal wastewater from four large treatment facilities. The constituents listed in the left-hand column are typical of the parameters included in an NPDES permit. Note that several of these constituents were not routinely analyzed at some of the facilities surveyed—likely because they were not regulated.

Engstrom reminds that many of the constituents of interest in cooling- and boiler-makeup water applications for scaling and corrosion potential usually are not regulated individually and not always analyzed on a regular basis.

This information gap is relatively common when evaluating potential reclaim water sources and highlights the importance of collecting data over an extended period of time. Comprehensive data collection also has the advantage of capturing seasonal variations, which occur in most regions. With MRW, this variation is even more exaggerated and can be day-to-day or even in day-to-nighttime cycles with regards to flows and composition.

The wide variation in the ranges for the individual parameters shown in Table 1 is a direct result of the level of treatment represented by the different facilities. Municipal treatment facilities have a minimum of secondary biological treatment, with many either using or transitioning to nutrient (N, P) removal and tertiary or advanced wastewater treatment systems. Table 2 summarizes typical effluent qualities that can be expected from various levels of wastewater treatment.

The foregoing information assures high-quality MRW can be produced if the appropriate treatment processes are in place. In fact, water produced by an advanced wastewater treatment system is on par with most natural waters currently used.

When evaluating MRW for makeup, the water expert warns, be sure you understand the treatment processes in operation and the variabilities that can be expected over time. This information, along with the volumes available, then must be matched to your plant’s equipment specifications in terms of materials of construction, operational requirements and chemical treatment programs employed.

Engstrom says there have been several important lessons learned regarding the use of MRW in combined-cycle plants that merit consideration when developing new projects or converting existing plants to this makeup water source for cooling-water applications. They include the following:

The most important thing to consider when using MRW in power applications, Engstrom says, is the impact the unique wastewater chemistry and its variability will have on corrosion, and on the deposit-forming potential, of the system when combined with the normal cations and anions encountered in conventional water sources. Conventional makeup water composition is routinely factored into treatment schemes, equipment/materials of construction, and system design. This has not been done with the same level of experience for most unconventional water sources.

For example, phosphorus (phosphate) can be found in wastewaters at levels much higher than those encountered in well or surface waters. As mentioned previously, this will depend on the NPDES permit and is normally expressed as P rather than PO4. Phosphate is an excellent mild-steel corrosion inhibitor and widely used in the treatment of cooling systems. Many cooling-water programs using MRW rely on this natural phosphate source for corrosion inhibition.

High levels of phosphate, combined with its variability, can create significant scaling issues in the system when higher hardness and/or temperatures are present. This can be aggravated by low flow conditions in critical heat exchangers.

Phosphate also is a nutrient that can stimulate microbiological growth and fouling, which is conducive to microbiologically influenced corrosion (MIC). Accelerated microbiological growth potential often is disregarded by powerplant operators, but it can have a major impact on the selection of cooling-tower fill and on biocide selection. High-efficiency fill, for example, can act as a high-surface-area substrate for microbiological growth. Fill plugging can result—possibly even collapse, caused by excessive weight when combined with high total suspended solids (TSS) trapped by the biofilm.

The presence of ammonia in the reclaim wastewater can have a detrimental effect on the corrosion rates of any copper alloys contained in the system—including stress corrosion cracking (SCC). Copper ions introduced into the water from accelerated corrosion also can have a negative impact on mild-steel corrosion rates because of copper plating and the resulting galvanic corrosion/pitting cells that may be formed. Table 3 lists the maximum ammonia levels that can be tolerated by various copper alloys. 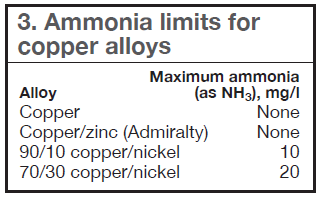 These levels are exceeded by many reclaim waters not subject to consistent nitrification (Tables 1 and 2). This is a major concern for existing systems where ammonia may not have been factored into the original design. New plants should address these issues during the design phase and in the materials-of-construction selection process.

Ammonia and nitrate, like phosphate, also are nutrients that can stimulate microbiological growth and fouling along with the resulting corrosion. As with phosphate, this can also impact design and operational parameters—such as the selection of cooling-tower fill and the microbiological control program. The latter is particularly important because ammonia reacts with most halogen-containing oxidizing biocides.

With high ammonia levels in the reclaimed wastewater, the use of gaseous chlorine or sodium hypochlorite and breakpoint chlorination becomes unrealistic. The facility must look to alternatives such as chloramine or chlorine dioxide with the associated cost and cost/performance sacrifices.

Other wastewater parameters, such as TSS and chloride and sulfate levels, must be analyzed carefully over time—even when the starting levels in the original source water are acceptable.

TSS can be affected dramatically by increased system flows during rain events as a result of inflow and infiltration (I&I) in the wastewater collection system. The higher flows impact influent solids as well as settling and clarification in the treatment process. This can be further aggravated in older infrastructure where combined sanitary and storm water sewers still exist.

Chloride and sulfate levels in the wastewater returned to the treatment plant can be significantly higher than were present in the initial distribution water. This is the result of water- softener regeneration discharges, cycling up effects from industrial users, addition of wastewater treatment chemicals at the municipal facility, and, in some coastal areas, I&I of brackish or seawater into the collection system. The author has seen chloride levels of <35 mg/l in the distribution system with returned levels of >200 mg/l in the reclaim wastewater discharge. 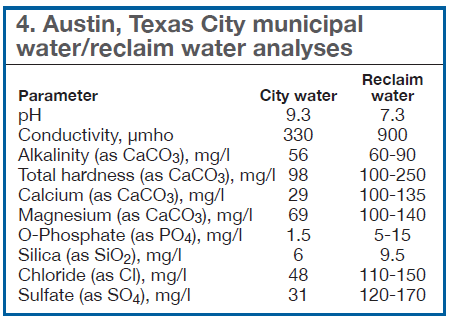 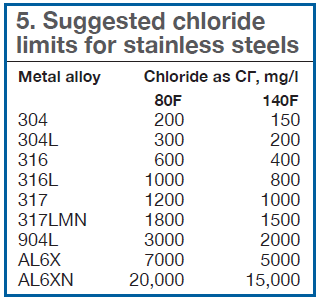 Representative analyses are presented in Table 4. It shows chloride and sulfate levels in MRW for this example can be three to five times greater than in the original water. In some cases, the levels for both of these ions can exceed recommended levels for corrosion of specific metallurgy or materials of construction in cooling systems operating with relatively low cycles of concentration (COC).

Chloride can cause stress corrosion cracking (SCC) of stainless steels. Table 5 lists suggested chloride limits for various stainless steels as a function of temperature. The recommended chloride levels would be exceeded at very low cycles of concentration for any of the less noble stainless-steel alloys used in heat exchangers operating on MRW. This would require upgrading the metallurgy for new plants during design, or retrofitting upgraded heat exchangers in an existing plant.

In addition to elevated chlorides affecting materials, elevated sulfates in reclaim water can impact the type of cement used in concrete in contact with the water (tower basins, for example). The American Concrete Institute (ACI) has established guidelines defining cement limitations as a function of sulfate in ACI 318 (Table 6). 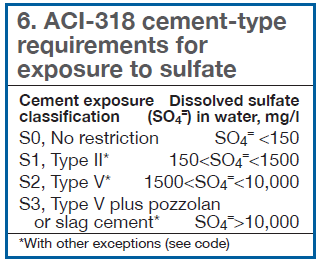 There are many locations where groundwater sulfate levels exceed 1200 mg/l. These levels would be significantly higher in the MRW and could have detrimental effects on concrete used in the system when cycled during normal cooling-tower operation. This often is addressed the selection and application of appropriate coatings.

The higher levels of total dissolved solids (TDS) found in MRWs alone may impose additional limitations on cooling-tower design and operating parameters. When cycled, high-TDS water may leave the system as drift. This can produce air emissions in violation of PM10 standards. Even with excellent drift eliminators in place, Engstrom says he has seen towers restricted on cycles because of TDS rather than other conventional indices.

Even though MRW may be highly treated for removal of soluble organics, it may still contain higher organic loadings than most freshwater sources. This loading usually is expressed as BOD or TOC. The carbon source, combined with the nutrients previously described, create the food source necessary for increased microbiological growth and the resulting fouling and corrosion problems that occur in the cooling-water environment. Increased attention must be paid to microbiological control when employing this makeup water source.

The TOC levels of MRW make it difficult to use in very-high-purity applications—such as makeup for high-pressure boilers. Many of the low-molecular-weight organic constituents are very difficult or expensive to remove and will generate organic acids in the boiler. New and existing plant designs rely on potable water and conventional demin treatment trains for makeup to these systems.