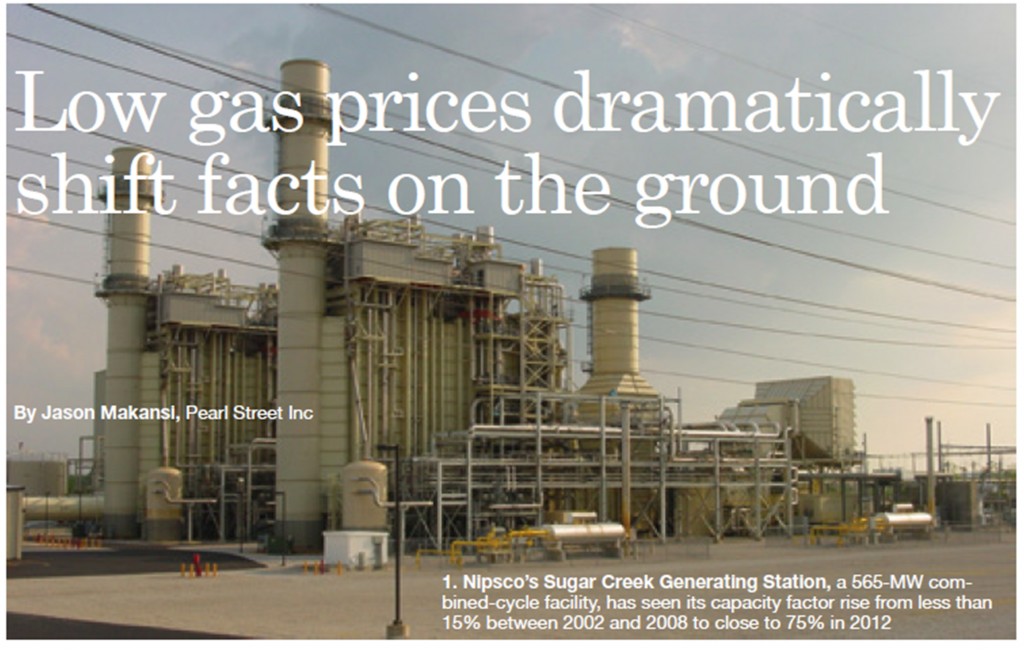 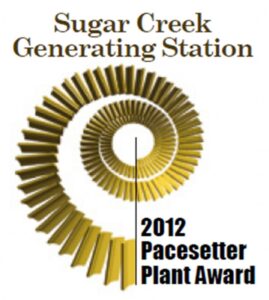 In June, the Energy Information Administration reported that, for the first time since data collection began, megawatt-hours from gas-fired generation equaled that from coal-fired plants. That wouldn’t have surprised the staff at Sugar Creek Generating Station (SCGS). In May, the 565-MW, gas-fired combined-cycle plant (Fig 1) logged an 86.7% net capacity factor (CF). It was the first month that the two gas turbine/generators, and the steam turbine/generator, operated every hour of the month.

But the latest natural-gas upsurge goes beyond EIA’s national statistics. The coal-to-gas shift is dramatically altering the facts on the ground at power stations. SCGS experiences this more acutely perhaps because it is (1) located in West Terre Haute, Ind, the heart of coal country; (2) the only gas-fired asset owned by its parent, NiSource Inc, a holding company; and (3) competing for corporate resources with the utility’s large coal-fired plants.

Facts on the ground have to change when your facility moves up quickly in the dispatch queue. SCGS faced a variety of “facts”: Utility management wasn’t familiar with combined-cycle plants, coal plant operation dominated the utility’s culture, more operating hours meant fewer hours to do maintenance, and the staff is lean—even for a combined cycle.

Although the capacity factor was increasing, the plant is flexible, so it was called upon to cycle up and down in load, causing equipment stresses. The plant has a very favorable heat rate, but every bit of efficiency helps (and reduces fuel costs) as total operating hours rise. Fuel is typically 80-85% of the operating costs for a combined-cycle plant.

Like most combined cycles of this type and vintage, SCGS has contractual service agreements covering the gas and steam turbine/generators. Therefore, plant staff could have the greatest impact by focusing on the HRSG and the balance of plant (BOP). To get focused on new operating and performance objectives, SCGS embarked on a program that applies state-of-the-art knowledge management tools and techniques anchored by reliability centered maintenance and operations (RCMO).

For its industry-leading role, SCGS/NiSource will receive the Combined Cycle Journal’s 2012 Pacesetter Plant Award at the upcoming meeting of Combined Cycle Users Group in Orlando in October (www.ccusers.org).

One way to think about the challenge faced by the plant is this: Three years ago, Sugar Creek personnel could spend 85% of the hours in a year making sure the plant ran as expected during the remaining 15 percent. Now those figures are almost reversed! And it’s not like SCGS was a slouch in O&M. Its equivalent forced outage rate (EFOR) in 2010 was 0.5, reportedly fourth best in the country, when the plant’s capacity factor was 31%—highly commendable for a staff of 16 operators, three managers, and one chemist.

Implementing an RCMO program (Fig 2) proved to be an ideal approach for SCGS’ situation. For starters, RCMO was a 2011 performance initiative for NiSource’s regulated utility Northern Indiana Public Service Co (Nipsco). Such a program would help SCGS quantify and justify the maintenance expenditures, identify operating and equipment design issues, and help staff conduct maintenance more efficiently within shorter intervals. Working with RCM consultant, MRG Inc, Southbury, Ct, gave SCGS and Nipsco the confidence to apply such a program to its lone combined-cycle facility.

“Before the RCMO implementation began in March 2011, the plant had well over 1000 planned maintenance tasks (PMs),” observes O&M Specialist Don Maffioli, “more like a coal plant.” Pre-RCMO, the plant performed PMs based on the original equipment manufacturers’ (OEM) guidelines. “Now we’ve gotten that number way down,” Maffioli adds. “The PMs that remain have to pass the ‘FARE’ test—they have to be feasible, applicable, repeatable, and effective.”

To keep the program manageable, SCGS applied off-the-shelf (OTS) failure mode and effects analysis (FMEA) templates that covered 80% of the equipment in the plant (many combined-cycle facilities have similar equipment). Only 20% represented custom-designed forms and screens. The program team still had to review the OTS templates and modify some of them, “but this was a real time-saver,” says Maffioli.

Other RCM programs fail or break down because it is difficult, time consuming, and expensive to identify every possible failure mode on every piece of equipment in the plant. Plant Manager Darrell Boyll stresses that “we got buy-in from our operators to the RCMO program by having them directly involved in the FMEA process.” This has enhanced the culture of performance improvement at the plant.

For example, operators have driven a startup optimization process, changed startup procedures, and, as a result, shaved a full hour off of a typical hot start. Considering that the plant experienced 161 starts in 2010, that’s an important gain.

Each failure mode is ranked by a “risk prioritization number,” derived from three variables graded from one to 10. The three variables are (1) the severity or impact of the failure, (2) the frequency of the failure and (3) the ability to detect the failure with monitoring that is currently in place. These three numbers are multiplied to arrive at the RPN. “This allows us to target all failures above a certain number, for example, to go after the worst actors first, get the low-hanging fruit, Boyll says.” 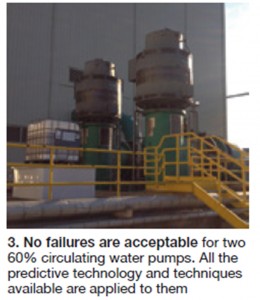 For some equipment, any failure is unacceptable. One example at SCGS is the circulating water pumps (Fig 3). “Unlike other plants, we only have two 60% circ water pumps,” notes Maffioli, “if we lose one, well, it’s obvious, so we throw all the predictive maintenance and techniques we have at them.”

An important aspect of the program is that it is “living.” Says Maffioli: “Any time we have an event that impairs our ability to meet our generation obligations, we submit a form called the Unit Trip/Load Loss Report.

It contains detailed information about the trip and we narrow down the information to a failure mode, then review the FMEA for that equipment. If the failure mode has been identified, we determine why the control didn’t mitigate it. If it is a new failure mode, we add it to the FMEA templates, along with mitigation strategies.”

Flexibility, a hallmark of the facility, represents a big part of Sugar Creek’s value to the owner. The plant can modulate on automatic generation control (AGC) through MISO at 15 MW/min over a typical load range of 330 to 489 MW. The plant can cycle down to 310 MW, but runs into CO emissions and heat-rate issues below that. Under 310 MW, gas-turbine combustion is unstable. Above 489 MW, HRSG duct burners can extract another 57 MW from the steam cycle, but the heat rate degrades to 7400 Btu/kWh.

Several equipment deficiencies identified through RCMO, and subsequently corrected by the plant, have paid enormous dividends. Examples include:

Complementing the RCMO program is an automated digital operator rounds process. “It’s like a portable expert system,” says Maffioli. Operators carry a mini-PC when they regularly check equipment. They answer questions and record data. When the PC is dropped back into its docking station, the data are automatically downloaded and trended. When the operators take a reading, they can see if it is outside established boundaries, and the PC will suggest actions to take.

“In the past,” states Boyll, “operator rounds revolved around simple equipment checks, but they were qualitative in nature.” The new AuditMatic® software (supplied by Form Automation Solutions Inc, Addison, Tex) has a simple point and click user interface and is designed to be set up and maintained by non-IT personnel. “It’s an ideal tool for novice operators and even serves as a refresher for seasoned operators,” says Boyll, “we’re currently working on how to incorporate the data into the plant’s historian.”

The next phase of the program is to hire a full-time reliability engineer. But the plant intends to go beyond the traditional bounds of RCM and integrate predictive analytics. “We are planning a SmartSignal (now part of GE Intelligent Platforms) implementation, which will allow us to create a relational database by pulling and correlating data from the distributed control system (DCS) through the data historian.”

In preparation for this, the plant has added sensors and controls to such equipment as the boiler feed pumps, RO pumps, cooling-tower gearboxes, selective catalytic reduction (SCR) unit, and vacuum pumps. The resulting analytics will help the plant identify root causes of failures and hidden failure modes critical to rounding out the FMEA templates for critical and non-critical components. 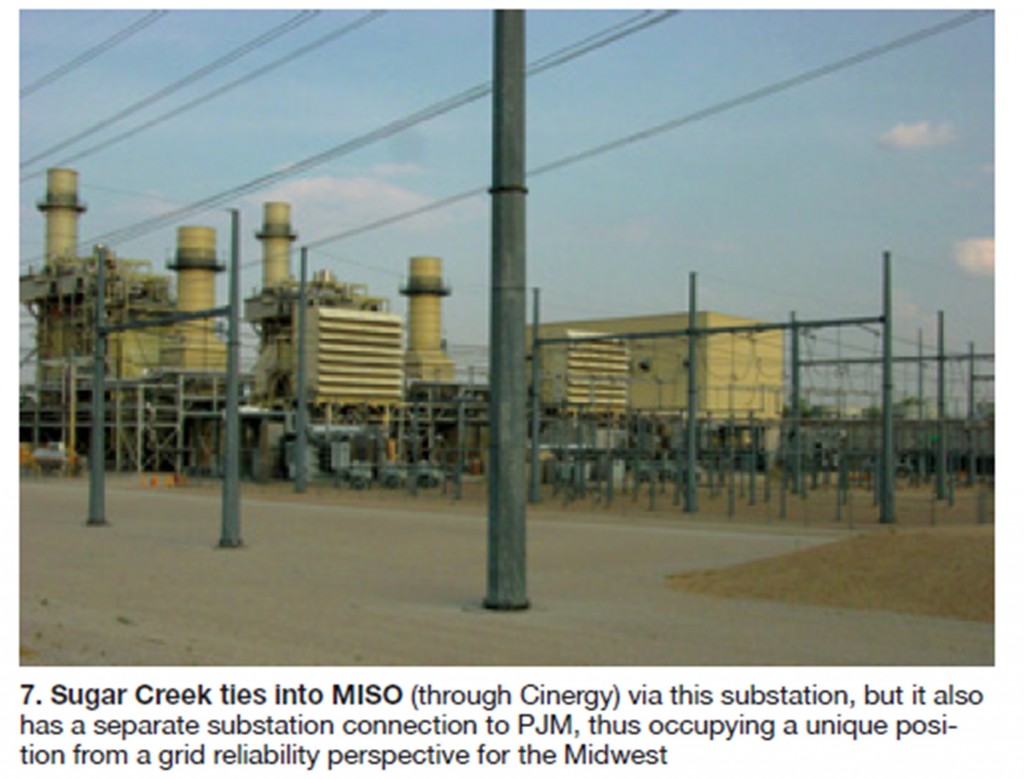 “One of the most fruitful areas for applying SmartSignal could be to the combustion dynamics in the gas turbines,” says Boyll, “avoiding one lean blowout pays for SmartSignal implementation.” Because they are the only combined cycle in Nipsco’s system, the economical approach is to buy the monthly subscription from the vendor rather than implement the software themselves.

Reliability is generally jobs one, two, and three for most powerplants, especially those owned and operated by regulated utilities. But SCGS isn’t just any plant when it comes to the grid. It is connected, through two separate substations and transformers, to both the Midwest Independent System Operator (MISO) and PJM Interconnection (Fig 7). Although SCGS is not a black-start plant, during a recent MISO blackout simulation exercise, it was the first plant called to connect up after the 345-kV ring was energized. Thus, reliability means more than profit and loss for the plant; it has a serious role to play in grid recovery. CCJ